From its inception, the Robert Schalkenbach Foundation has been committed to keeping the works of Henry George in print. This new major venture, which will be published as a six-volume series by Fairleigh Dickinson University Press, seeks to go well beyond that goal, by offering George’s works in a new, scholarly edition which places those works in historical and intellectual context. The editors of the series are Dr. William Peirce, of Case Western Reserve University, and Frank Peddle, of Dominican University College in Ottawa. 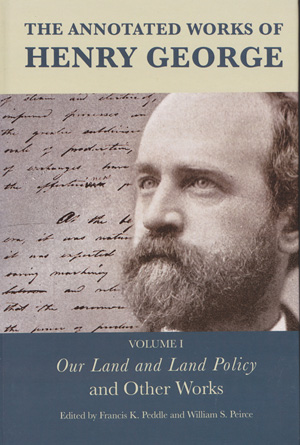 This six-volume critical edition of the works of Henry George assembles all his major works for the first time with up-to-date introductions to each volume, critical annotations, extensive bibliographical material, and comprehensive indexing. This new collection is an invaluable resource for Georgist scholarship. As a foundation for future research agendas and reformist debate it is an indispensable tool for discussions on such pressing issues as economic inequality and wage stagnation.

Volume I of The Annotated Works of Henry George includes three fully annotated works accompanied by three new essays that provide their historical, political, philosophic, and economic context. George wrote Our Land and Land Policy (1871) while still a journalist fully engaged in the civic life of California. The introductory essay by Fred Foldvary shows that George, even at this early stage in his career as an economist, wrote with uncanny insight and analytical skill about the issues that defined his later career.

In The Land Question (1881), written just as his fame was being established, George dove into the maelstrom of Irish land policy. Jerome Heavey provides the essential clarification of the history and politics of Irish land law, and explains the reasons why George’s plan for reform was not adopted.

Property in Land (1885) incorporates the debate between George and the eighth Duke of Argyll. Brian Hodgkinson provides a new critical essay on the historical and philosophical setting for this exchange of open letters between the politically connected owner of a vast swath of land in Scotland and the reform-minded “Prophet of San Francisco.”