I first met Yisroel Pensack at the San Francisco Henry George School in 1972. His name was Richard at the time. He was there by a strange coincidence. He and his wife Linda had recently moved to San Francisco where Richard saw our class flyer posted on a bulletin board at a laundromat. It included this endorsement by John Kiernan: “No one should be allowed to speak above a whisper or write more than ten words on the general subject (economics) unless he has read and digested Progress and Poverty.” 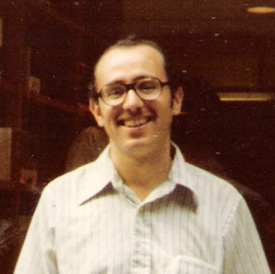 Yisroel in the 1970s (Thanks to Toby Lenihan)

Richard had graduated from Temple University in Philadelphia with a degree in Finance, but he had never heard of the book. He asked Linda to try and buy a copy, but she couldn’t find a bookstore that stocked it. But then Linda, who worked as a receptionist in a San Francisco office, took a message from a caller named Bob Tideman, from the Henry George School. “Henry George!” said Linda. “The author of Progress and Poverty? My husband wants to read that book, but I can’t find it anywhere!” Bob gave her the school’s address, and Richard soon appeared.

Richard dropped by many times, in fact, to borrow all of George’s books and engage in long conversations, with Bob as well as fiery Scottish Georgist Charles Cameron MacSwan; Harlan Trott from the Christian Science Monitor; Harry Pollard, Director of the Los Angeles School; and Bob’s good friend Mason Gaffney, up from U.C. Riverside. Richard had a fantastic memory, and soon became well versed in Georgist economics and Single Tax history, and an ardent promoter of this far-reaching reform. Soon he had been hired by Bob to raise money and administer the J. Rupert Mason Journalism Prize. Later he also did high-quality writing and editing for The Analyst, our bi-monthly journal. Richard had worked as a financial reporter for the Newark Star Ledger, San Francisco Examiner, and San Francisco Business News.

After graduating from Livingston High School in New Jersey (where he met Linda), he enrolled in an accelerated premed program at Penn State, but later switched to Temple University and Finance.

Richard spent much of his adult life struggling with medical problems: first receiving a heart transplant for a congenital heart defect; later a liver transplant to combat the ravages of Hepatitis C contracted from a blood transfusion before there was screening for that virus; and eventually a kidney transplant, which failed toward the end of his life, requiring an exhausting and debilitating four hours of dialysis, four days a week. San Francisco School director David Giesen visited him frequently and helped him a lot during his last weeks. The family was with him at his death, and flew his body to New Jersey for burial.

Richard bore all of these invasive medical procedures without complaint, and despite his increasing health problems, he lived a full and varied life. He read voraciously, and if there was an article he considered worthy, he would contact the writer and urge him/her to read Progress and Poverty. He also taught several classes at the Henry George School, and several of his students became teachers. He and Linda married in 1969, and had two children, Benjamin and Adam, both of whom now live in the Bay Area and are successful lawyers and sports agents. After leaving the School, Richard and Linda lived in Israel for a while before returning first to New Jersey and then back to San Francisco. After their divorce Richard became more involved with his religion and changed his name to Yisroel. He and Dr. Edward Tamler had earlier co-authored an article on Georgism for the San Francisco Jewish newspaper, and Yisroel also started a website called “Orthodox Georgist,” and another called ARWEP: Alliance to Raise Wages and End Poverty.

Richard had a great sense of humor. He liked the sound of words and would play with people’s names, as in calling the Ethiopian Emperor Selassie “Haile Ridiculous.”

My favorite memory of Richard was from our School picnics at Golden Gate Park. Linda would bring their baby Benjamin, and Richard would stand and give inspiring talks on the need for Georgism in our society. This was a central theme throughout his life, and like Henry George, he thought it would eventually succeed because of its inherent truth.

Yisroel’s truth-telling was often less than diplomatic; he was critical of many of us over the years. To me Yisroel was like one of the Biblical prophets: unpopular at times for his biting message, yet admired for his insights and courage.

I feel lucky to have known Yisroel and to have shared in the vibrant Single Tax educational movement in San Francisco in the 1970s. I hope that Yisroel, Bob, Charlie, Henry George and all his followers who have passed on have found each other in the next world, and are busy planning the next phase of humanity’s struggle for equal rights to our Mother Earth.