Adapted by Robert Clancy from the 1903 book Ethics of Democracy by Louis F. Post, ca. 1950

Democracy, from Greek Demos (people) and Krateo (rule), means Rule of the People. Not some of the people, but all the people. Ethics, we know, is the science of human duty. It is the science of right: moral science. Whether there are, or should be, ethics in democracy is with some, perhaps, only a point of view.

Ethics of democracy would mean those considerations of morals and rights upon which democracy must be founded and according to which it must be built to be right and just.

The democratic idea as applied to government demands that equality of fundamental rights be recognized as a natural endowment to be protected as a public duty.

If we grasp that great axiom upon which the legal right of self-defense is securely founded, the axiom that every person has a right to him or her self as against the aggressions of every other person, or all other people combined; if we grasp that axiom, we have the key to all moral problems involving human rights and human duties. 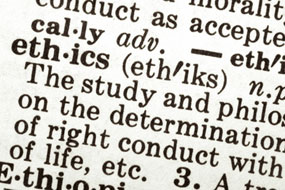 That great principle “The Brotherhood of Man” is the ethical touchstone of democracy. The principle that there is but one God and all people are children of God — or if we prefer, that nature is a unit and all people therefore are integral parts of that unit, is a recognition of the fundamental law of social life.

The Declaration of Independence lays a correct basis for democracy:

We hold these truths to be self-evident; that all men are created equal; that they are endowed by the Creator with certain inalienable rights; that among these are life, liberty and the pursuit of happiness; that to secure these rights, governments are instituted among men, deriving their just powers from the consent of the governed.

The equality of all people is the tap-root of democracy. Not equality in size, strength, intellect or will, but that all are endowed with equal rights, with inalienable rights, among which are life, liberty and the pursuit of happiness.
No form of government has any right to coerce an individual regarding his or her individual concerns. Such coercion is an invasion, an aggression, and it does not cease to be such because the invader is a government instead of an individual, or a mob.

Madison wrote: “Justice is the end [aim] of government. It is the end of civil society. It has been and ever will be pursued until it be obtained or until Liberty be lost in the pursuit.

It is to make life easier and more secure that people form themselves into communities, and government is merely the orderly conduct of community affairs.
Whatever rights government has are delegated to it by individuals. It has no rights to give or grant.

Rights carry with them correlative duties. The assertion that people have equal rights is the equivalent of saying that each has a duty to respect the equal rights of all. This principle is expressed by the “Golden Rule”: “All things whatsoever you would have that men should do to you, do ye even so to them.” This principle is of universal application; it admits no exceptions.

Individual rights and duties are to be considered as if there were no community. They inhere and are complete in the individual. Every person, for instance, has a right to live.

Human labor is the basis of economic research. Labor is economically self-existent; on the economic plane, it has no prior cause. “Labor” is a technical term descriptive of the human family producing satisfactions for human desires. That, in the science of economics, is the cause of all effects.

But labor cannot create something out of nothing. It cannot make bread by stating its desire to have bread. Labor has no power to create, but only to produce. It can draw forth objects by so adapting the matter and forces which nature supplies as to fit them for serving human purposes. But labor can produce nothing without the raw materials and working places of the physical universe. Or, to use the inclusive economic term, labor needs land: the one thing, the only thing, that labor must have and cannot make. Land is the sole condition of all economic processes that labor generates. Without land, all economic processes — and even life itself — would be impossible.

Labor produces wealth from land, and land yields wealth to labor. Wealth is labor in tangible form. It is stored-up labor. When producers or workers exchange among themselves the wealth they have produced, they are exchanging one person’s labor for another person’s labor.

When we exchange products of labor, we are exchanging service for service, work for work. These physical products of labor do not last. They are consumed, or tend to disintegrate, so that they must continually be produced and maintained. Therefore, civilization of today does not rest upon the saved-up products of earlier generations, but upon the interchanges of service in this generation — and to a great extent, even this year, this month or this week.

It is often explained that the idle rich are living upon the accumulated savings of their ancestors. Service cannot be saved — and even when in tangible form, it can only be saved for a little while. Society lives almost literally from hand to mouth. But individuals can and do save obligations to work — and this is what is meant by saving wealth.

Such saving is not necessarily incompatible with the principle of service justly exchanging for service. The essential thing is that when a service is rendered, it shall be in exchange for an equivalent service, whether the equivalent service be rendered concurrently, or has been rendered in the past, or is to be rendered in the future. This is what constitutes service for service.

Civilization rests securely only on interchange of work. Service for service is the condition of civilized life. It is the central law of social development. Though people may live without serving, it is only through some degree of interchange of service that they can live civilized lives. The more perfect the interchange in its economic — and moral — qualities, the higher the civilization.

To be equal and just, exchange or trade, or the rendering or accepting of service, must be upon a basis of equal exchange. It is unjust to get without giving or to give without getting. Justice in trade is the exchange of equivalents.

Before anyone can give, he must own what he gives. It must be his against all the rest of the world. It must be morally his. No one can justly give or sell or exchange what is not his own.

Nature gives nothing to any person except in return for exertion — in reward for labor. Labor, then, is the natural justification for ownership. Whatever a person produces, or receives from other producers in exchange for what one has produced, is that person’s rightful property.

No individual or group — not even the government — has a right to deprive an individual of any part of what he or she has produced.

Only upon these foundations of human rights and human equality can an enduring structure of democracy be built.