In 1855 Chief Seattle of the Suquamish tribe in the Puget Sound region gave a speech in response to a request from President Franklin Pierce that his tribe sell its ancestral lands to the government. 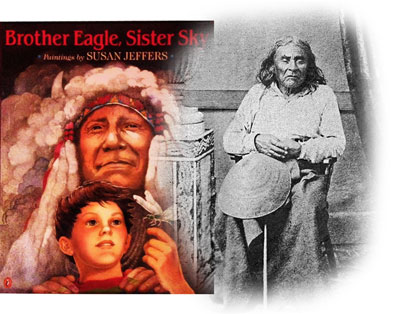 A speech that we thought was Chief Seattle’s was commemorated on Earth Day and made into a famous childrens’ book. That speech was an environmentalist manifesto in which Seattle agrees to sell the land, if the white man will always respect the earth, and “treat the beasts of the land and the birds of the sky as his brothers.” It was a stirring call to honor and respect the natural world — but, alas, it was not what Seattle said. It was penned in 1971 by a screenwriter named Ted Perry — who, reportedly, was appalled that his fictional speech was mistaken for the original.

And when you think about it — it did seem a bit fishy, didn’t it? We’ll sell you our sacred land, if you promise to be a good environmental steward?

In the real speech, Chief Seattle made it clear that he had no intention of letting white people off the hook. He would only relinquish the land because he had no other choice. “Your God,” he said, “loves your people and hates mine…. He has abandoned his red children…. Now we are orphans. There is no one to help us.”

Seattle went on to say that he would “sell” the land if his people would “always be allowed to visit the graves of our fathers and our friends.” These words cannot be taken at face value, because that condition was impossible: Seattle explained, in the clearest terms, that the graves of his fathers and his friends encompassed the entire North American continent.

…at evening the forests are dark with the presence of the dead. When the last red man has vanished from this earth… these shores will still swarm with the invisible dead of my people…. There is no place in this country where a man can be alone. At night when the streets of your towns and cities are quiet, and you think they are empty, they will throng with the returning spirits that once thronged them, and that still love those places. The white man will never be alone. So let him be just and deal kindly with my people.

Land is the entire material world; boundaries are arbitrary and impermanent. One cannot have title or tenure to land per se, but only to a bounded piece of it. Legally, what land ownership amounts to is the title to a bundle of rights that attaches to a specific location. What rights are in that bundle is subject to society’s legal control.

In a deeper sense, we can see that Chief Seattle was warning us that the alienation of land leads to personal, spiritual alienation. Does “owning” your land make it possible for you to be alone on it? Can you forbid access to every trespasser, forever? You think you can be alone on your land, because you can defend it with your gun. But on some level, you know that everyone has an equal right to that land. If you don’t compensate the community for your exclusive privilege to it, then your sovereign ownership can never be secure. Seattle didn’t lay this curse on us — he just pointed it out.

Woody Guthrie seemed to agree, in this less-known verse from his most famous song: 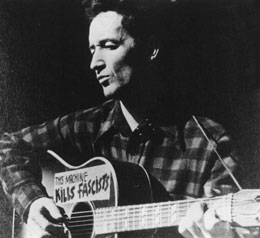 As I went walking I saw a sign there
And on the sign it said “No Trespassing.”
But on the other side it didn’t say nothing,
That side was made for you and me.

In the last section of Progress and Poverty, Henry George addressed the question of how societies decline, or advance. He asked, “What is the law of social progress?” Such a law, he wrote,

must explain clearly and definitely… why, though mankind started presumably with the same capacities and at the same time, there now exist such wide differences in social development. It must account for the arrested civilizations and for the decayed and destroyed civilizations… for retrogression as well as for progression… it must show us what are the essential conditions of progress, and what social adjustments advance and retard it.

Following logically from all of his previous analysis, George identified two essential conditions of social progress: association and equality.

Equality is something we all have a fairly clear idea of. But what did he mean by “association”?

Association is nothing less than the basis for all the efficiencies that flow from a free market economy. People come together into towns and cities; they cooperate, and compete, and the whole community is better off. People write, and speak, create music and art and publish their works, and everyone learns. To see the great power of free association, consider its absence. Soviet Russia was a society that worked to inhibit association. Freedom of the press and religion were severely curtailed; economic decisions were made by central committees and could not be opposed. The Soviet Union had great political and military power, but it couldn’t stand the weight of its own inefficiency and repression.

Similarly, a society that inhibits equality is in all kinds of trouble. It ill-treats the people it keeps down, of course — but even the fortunate few must waste precious time and effort maintaining an unjust status quo. The more unequal a society is, the more effort it takes to maintain it. Probably the most obviously unequal society was the American institution of slavery. Yet there have been — and sadly, still are — many societies that keep women in a second-class state of oppression and servitude.

The institution of private ownership of land works against both equality and association. If some people are granted exclusive ownership of the land, while others must pay private owners for access to it, that is the very antithesis of equality. And private landowners powerfully inhibit association by choosing to hold valuable land out of use. That means that the Georgist remedy is essential for sustainable social progress.

A highly-skilled stage magician can make something huge — the Statue of Liberty, say — seem to disappear. Yet if that magician were to actually start to believe in his own smoke and mirrors, our feelings about his performance would shift from awe to pity. Modern economics has performed the astounding trick of making land disappear from economic analysis. And, alas, many have come to believe in their own illusion.
If you had never thought about land as a separate factor, of course, then its absence from economic consideration wouldn’t ring any bells. People have been trained to ignore the meaning of land — and ignore it they do.

This has profound consequences. Let’s consider just a few examples.

If private ownership of land is sacrosanct, then: Malthus was right. The poor will indeed be with us always — and they will always breed faster than food can be grown. The urbanization of the poor south will continue, and misery will grow. Poor people keep being born, and there just isn’t enough land to go around. Transnational corporations have every right to retain their vast holdings, on which they pay local peasants starvation wages to grow crops for export.

If private ownership of land is sacrosanct, then: Keynes was right. The boom/bust cycle can never be eliminated, only managed by fiddling with fiscal and monetary policy, which grows less effective over time. Inflation will always overheat before all the willing and able workers can find jobs; taxation will always place a dead weight on production. Real estate speculators have every right to enjoy the appreciation of their assets; it’s their due, fair pay for entrepreneurial acumen. 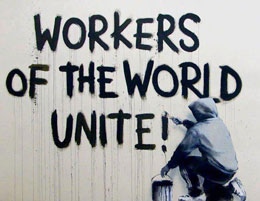 If private ownership of land is sacrosanct, then: Marx was right. In the “capitalist” system, there is an inherent structural tendency for the rich to get richer and the poor to get poorer. Labor’s gains via legislation or collective bargaining will always erode, as real wages inexorably drop. Those at the top will resort to ever-more-drastic repressive measures to keep disgruntled workers in line. As the inefficiencies and dead weights of the system grow, regimes will resort to imperialistic wars to secure resources and profit margins. 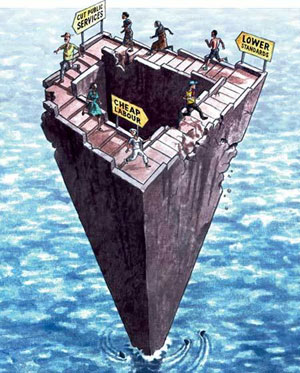 If private ownership of land is sacrosanct, then: There really is a global “race to the bottom”. Nothing can be done to provide better opportunities for poor workers in developing countries. They need the work — at whatever pay their faceless employers are willing to give them. If nations want to develop at all, they have to play by rules set by multinational corporations. Land barons in those nations have no incentive to let go of their holdings to give workers better options. Why should they do that? It’s their land.

And finally: if private ownership of land is sacrosanct, then: Dick Cheney 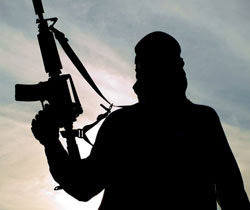 was right. Terrorism will continue escalate. People who resent our advantages and hate what we stand for will become increasingly desperate and dangerous, and we must do what’s necessary to protect ourselves. Our very way of life depends on control over scarce oil, water and cropland.

Fortunately, we now know that private ownership of land need not be sacrosanct. The alternative is not only viable but infinitely preferable. We can replace of burdensome, invasive taxes with public collection of rent. Doing so would confer a smörgasbord of benefits on society, without compromising the efficiency of a free-market economy. 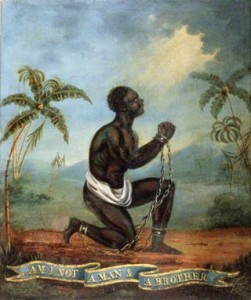 At one time, slavery was deemed a sensible, sound practice; it’s even condoned in the Bible. At one time, it was taken for granted that women had no rights beyond what their fathers and husbands chose to grant them.

Nevertheless, through the long years when such backward practices held sway, there were always thoughtful individuals who saw the denial of basic human rights for what it was. The most basic right of all is that of life itself — yet, if private land ownership is sacrosanct, then we are obliged to pay a landowner for access to the natural resources that we must have in order to live.

In Progress and Poverty, Henry George thundered, “Private property in land is a bold, bare, enormous wrong, like to chattel slavery.” 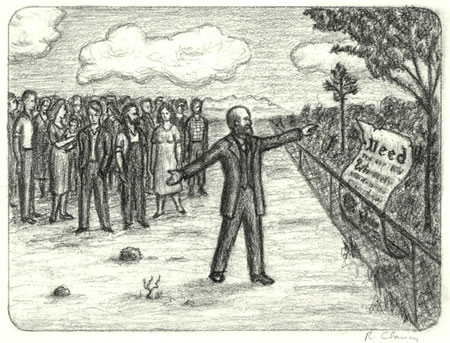 So far, most people have been either too busy, too fearful — or too well-served by the status quo — to stop and think about the truth of those words. But they will. Eventually it will dawn on them that nothing else
will work.

Adapted from the script of the final segment in a new 16-part video series sponsored by the Henry George School, and narrated by the author.