My mother believed that the unborn soul of a child chooses his or her parents. She was 38 when I was born, and 41 when my sister Rachel came along, so we must have known she was worth waiting for. My mother put the needs and happiness of her children miles ahead of her own self-interest. 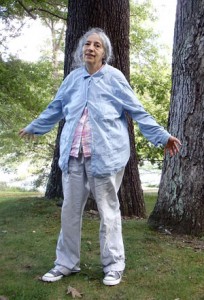 My sister and I both had natural births at home; my mother refused any drugs, because she felt it would be harmful to us. My sister even decided to come out backwards; I think that was the first joke of her comedy career. My mother put almost her entire being into raising my sister and I. She helped us to find meaning in our failures, and she celebrated even our most minor successes with joy and passion.

Whatever remained of her passion and energy, she put into causes, donating time or money to Amnesty International, The World Wildlife Fund, the Chesapeake Bay Foundation, an organization called Guiding Eyes which supplied seeing eye dogs to the blind, and many others. She almost never spent a dime on herself. She very rarely took vacations, and she wore shoes and clothes with holes in them. When my sister and I were in high school and college we put on a lot of comedy sketches, so we were always searching thrift stores to find cheap clothes for costumes. After the plays were over my, mom would just wear the clothes.

She would often say “When things don’t go as you expect, ask what message is God trying to get across to you.”

If you knew her, she probably broached the subject of Henry George with you. She learned it from her father, Herbert Altshuler, with whom she was very close. This was a moral issue for my mother. She believed people had a right to any income or possessions that they earned through honest work, but because God, and not humans, created the land, she believed the land should be owned equally by all people and all generations.

Her favorite biblical quote was Leviticus, 25:23 “The land shall not be sold for ever: for the land is mine; for ye are strangers and sojourners with me.”

My mother couldn’t stand greedy, unsustainable use of the land that belongs to God and should be shared by His children. That’s why she was so against big corporate factory farms. She led by example and almost exclusively bought her fruits, vegetables, milk and meat from local small farms. She raised chickens for eggs, and bought venison from local hunters. 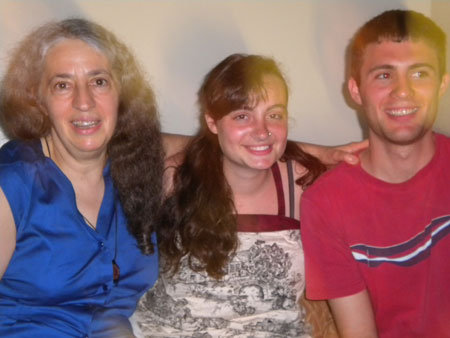 Toby, Rachel and Will

She hoped to leave the world a more just place for her children. Even though her life was cut short, and she was only 66 when she passed away on June 30th, she put so much passion, kindness, and love into every nurturing moment that spent with her family and so much of our time with her was the best we could possibly ask for, that it actually feels greedy that I wish we could have had just a little more time together, but I think that’s a kind of greediness that she could forgive.