John:  The laws and conditions of the Production of wealth are physical truths. There is nothing optional or arbitrary in them. It is not so with the Distribution of wealth. That is a matter of human institution solely. The things once there, mankind, individually or collectively, can do with them as they like.

Henry:  A man belongs to himself, so his labor when put in concrete form is his own. No one else can rightfully claim it, and his exclusive right to it involves no wrong to any one else. This constitutes the rightful basis of property, and it is necessarily the only source. There can be to no rightful ownership of anything which is not derived from the title of the producer and does not rest upon the natural right of the man to himself.

John:  A person cannot keep even what he has produced by his individual toil, unless by the permission of society. Not only can society take it from him, but individuals could and would take it from him, if society only remained passive. The distribution of wealth, therefore, depends on the laws and customs of society. 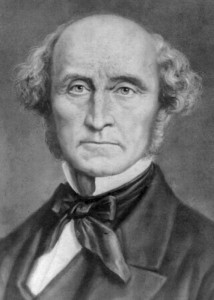 Henry:  While this proposition that things once there, people can do with them as they like, is in itself irrefutable, the argument in which it is introduced begs the question. In support of your assertion that in political economy the distribution of wealth is a matter of human law, you cite the fact that in what human law calls the distribution of wealth, societies can do as they like.

John:  Human beings can control their own acts, but not the consequences of their acts either to themselves or to others. Society can subject the distribution of wealth to whatever rules it thinks best: but what practical results will flow from the operation of those rules, must be discovered, like any other physical or mental truths, by observation and reasoning.

Henry:  It needs no economist to tell us that if in any country the products of labor were appropriated without regard to the will of the producer, production would cease and starvation begin. Whether this took place in defiance of human law or under the sanction of human law; the result would be the same. Clearly then, this inevitable result is the consequence of natural law.

John:  Private property, in every defense made of it, is supposed to mean the guarantee to individuals of the fruits of their own labor and abstinence. The guarantee to them of the fruits of the labor and abstinence of others, transmitted to them without any merit or exertion of their own, is not of the essence of the institution, but a mere incidental consequence, which, when it reaches a certain height, does not promote, but conflicts with, the ends which render private property legitimate. 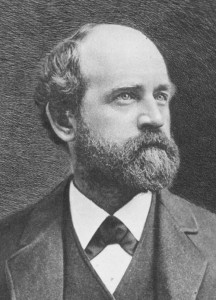 Henry:  The truth that is confusedly stated in these sentences is in direct contradiction of the assertion that the distribution of wealth is a matter of human institution solely.

John:  We are too ignorant either of what individual agency in its best form, or Socialism in its best form, can accomplish. It is for experience to determine how far or how soon any system of community property will be fitted to substitute itself for the private ownership of land and capital. In the meantime, the political economist will be chiefly concerned with the conditions of a society founded on private property and individual competition. The object to be principally aimed at is not the subversion of the system of individual property, but the improvement of it, and the full participation of every member of the community in its benefits.

John:  If the land derived its productive power wholly from nature, and not at all from industry, or if there were any means of discriminating what is derived from each source, it would be the height of injustice to let the gift of nature be engrossed by individuals. But though land is not the produce of industry, most of its valuable qualities are so.

Henry:  Land, as a term of political economy, means that element of productive power derived from nature and not at all from labor. It has and can have no other meeting. You seem to think that you have shown the justification of property in land, but the reasons you give only justify property in the produce of labor.

John:  Property in land is valid, in so far as the proprietor of land is its improver. Cultivation requires buildings and fences, which are wholly the produce of labor. The fruits of this industry cannot be reaped in a short period. The benefit is spread over many years, perhaps over all future time. A holder will not incur this labor and outlay when strangers and not himself will be benefited by it. He is sure of having always a sufficient period if his tenure is perpetual.

John:  Rent, unless artificially increased by restrictive laws, is no burden on the consumer: it does not raise the price of goods, and is not otherwise a detriment to the public, than inasmuch as if the state had retained it, or imposed an equivalent in the shape of a land-tax, it would then have been a fund applicable to general instead of private advantage.

Henry:  Yet we must also consider the expectation of the future enhancement of land values, which leads to speculation, or the holding of land for a higher price than it would then otherwise bring. This tends to the withholding of land from use, thus forcing the margin of cultivation farther than required by the necessities of production. This operates with enormous power. It is the reason why, in spite of the increase of productive power, wages tend to a bare minimum which will give but a bare living

John:  Poverty, like most social evils, exists because men follow their brute instincts without due consideration. The causes of poverty are in no way mysterious. Wages depend on the number of the competitors for employment. The laboring classes should be induced to practice a sufficient degree of prudence in regard to the increase of their families.

Henry:  Increased population, of itself, and without any advance in the arts, implies an increase in the productive power of labor. The labor of 100 men, other things being equal, will produce much more than one hundred times as much as the labor of one man. It is a well-provisioned ship, this on which we sail through space. If the bread and beef above decks seem to grow scarce, we but open a hatch and there is a new supply, of which before we never dreamed. And very great command over the services of others comes to those who as the hatches are opened are permitted to say, “This is mine!”

John:  So much on the institution of property, a subject of which, for the purposes of political economy, it was indispensable to treat, but on which we could not usefully confine ourselves to economical considerations.

Henry:  Freed, as I have tried to free her — in her own proper symmetry, political economy is radiant with hope.