Teckla is an Essayist, Journalist, and a life-long advocate for the ethical and just treatment of the earth and all its inhabitance. “The plight of any one group does not supersede another’s. I believe when one is diminished we are all diminished.”

GJ: You have a long history of connection/involvement with United Nations work. Could you tell us about that?

I grew up in the United Nations. I am one of a minuscule minority. 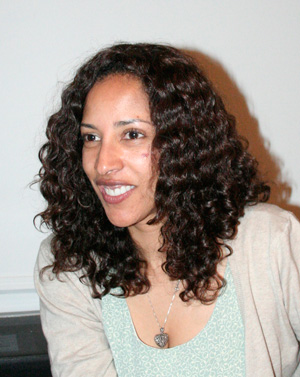 My mother, after graduating from Columbia University with a degree in Economics, took a summer job at the United Nations as she prepared to continue her studies at London School of Economics. As the adage goes: We plan. God laughs. My parents met in the Congo during the United Nations Operations in the Congo (UNOC). My mother supervised Congolese clerks who extracted export/import information from the pre-independence Congo, with the view to jump-start the Independent Congolese economy. My father, a Commissioned Officer in the Ethiopian Army, was The Chief of Military Operations of United Nations Peace Keeping. After UNOC, my parents married and I was born in Addis Ababa, Ethiopia. In 1968 my mother and I returned to UN Headquarters, and soon she was invited to join the Office of the Secretary General in the Division of General Assembly Affairs. Her career with the UN was an impressive one. In my efforts to advance the cause of the IU, I have been fortunate to avail myself of the respect for and reputation of my mother, as well as my knowledge of the workings of the Organization.

I attended the United Nations International School (UNIS) in New York from Kindergarten thru the International Baccalaureate. UNIS was championed by Eleanor Roosevelt about the same time that she successfully lobbied for the adoption of the International Declaration of Human Rights. She conceived of the school as a resource for the cause of peace. The Secretary Generals from U Thant to Kurt Waldheim knew every UNIS student who had a parent in United Nations HQ. Like many UNIS students, I learned the Charter and Declaration of Human Rights. UNIS students enjoy the privilege of having our Commencement Ceremony held in the General Assembly Hall. More important, before the Model UN became a cash cow for school systems, the upper houses at UNIS were required to, and still, take a General Assembly Agenda item, such as Nuclear Disarmament, debate it, vote on the resolution, adopt it and finally, deliver our final Document to the General Assembly. The four-day exercise takes place in the General Assembly Hall. In short, all the hows and whys of United Nations policy and process became ingrained and reflexive for me.

GJ: The Habitat 3 conference is meeting in Quito as we speak. What is your view of the importance of this event?

I am conflicted about HABITAT conferences. The history of the establishment of HABITAT is interesting and some may argue marks one of the inauspicious paths the Organization embarked upon. The stated idea of HABITAT is laudable. However, after the Vancouver and Istanbul conferences, many ask: how many of the resolutions have been implemented? Anywhere? I urge your readers to become familiar with the documents created after the three HABITAT Conferences.

I am deeply concerned because I am old enough to remember the plan floated in North America and Europe, in the mid 1970s-early 1980s, to create megalopolises. I have seen firsthand, many times, what the unchecked expansions of cities means, not only to the poor and indigenous but to the working class as well — be it in Rio de Janeiro, Caracas, Addis Ababa, or Johannesburg. The HABITAT documents, like the Sustainable Development Goals (SDGS), insist that Public Private Partnerships (PPPs) are a primary financing instrument to cure all the ills of society. The argument most forcefully proffered in the UN is that it will cost some $4-5 trillion per year to implement the SDGs. Since no country has this kind of money, the private sector must step up. As Georgists we know that this blanket statement is dangerous. Perhaps if LVT were correctly and effectively implemented, and truly free trade were practiced, PPPs wouldn’t be the preferred option. One must remember that private interests, like corporations, have fiduciary obligations to their stockholders, as do governments to their citizenry, What happens when those responsibilities clash?

I hope that before the next HABITAT Conference the IU will effectively engage the public so that their rights and obligations are understood. In so doing the problem of gross inequities will be properly addressed, and — equally important — conservatorship of this earth will be fully incorporated throughout all walks of life.

GJ: Our colleagues Quisia Gonzalez and David Triggs are in Quito. What do you think would constitute a big win for their work there on behalf of the IU?

Successfully presenting the Georgist paradigm as the most effective instrument in capitalism. A just and fair marketplace, in all quarters, is our only hope.

GJ: The International Union enjoys consultative status as a UN NGO. What does that mean, and what opportunities does it offer our movement?

Article 71 of the UN Charter granted consultative status to approved Non-Governmental Organizations (NGOs). This status entitles the IU to attend, and make oral presentations, at relevant meetings and international conferences, and to submit statements, which will be circulated in full, on issues relevant to the Council. We may submit reports on studies that pertain to items that the Council is engaged in. We can avail ourselves and partner with agencies, programs of the Organization and other NGOS, and lobby and advocate our mission to Member States.

The IU also enjoys a relationship with the Department of Information (DPI) at the UN. This relationship has been underused over the years. Through DPI we can reserve conference rooms when presenting our work and initiatives as an organization, access the UN Database, digital library and educational tools. We can use UN-TV to present video packages of our work to address a current or longstanding inequity that is to be righted.

The IU could raise its international profile, increase its membership and more important, actually do something that would bring us closer to realizing LVT implementation. The UN is focused on achieving the 2030 target of the SDGs. I argue that all seventeen goals are addressed, and may be achieved, by implementing the Georgist paradigm.

Unfortunately, the IU has not taken full advantage of the opportunities that our accreditation affords. We have lacked a clear plan of action, concise and accurate language and comprehensive understanding of what can and cannot be done in the UN. It must be noted that no resolution in the United Nations is legally binding. The function of the civil society component of the UN is to enable the NGOs to bring the issues that are found throughout the world that hinder or negate the Charter, international law or national law and through the resources of the Organization, including access to member states, find peaceful and equitable solutions.

Georgists can help the IU delegates by providing data, information, observations and concerns regarding situations on the ground and opportunities for implementation of the Georgist remedy. We must work in concert with our membership. Those who have expertise in any area relevant to our stated mission and the SDGs must reach out. If there are particular issues that need to be brought to the attention of the World Body we are there to help you. In 2017 the IU/UN Delegation must submit more papers, host more events, engage in more projects. This will only happen if the IU membership works with us.

GJ: What do you think Georgists need to learn, and pay attention to, to be more effective advocates in the UN context?

The Charter of the United Nations begins:
“We the peoples of the United Nations, Determined to save succeeding generations from the scourge of war, which twice in our lifetime has brought untold sorrow to mankind, and to reaffirm faith in fundamental human rights, in the dignity and worth of the human person, in the equal rights of men and women and of nations large and small, and to establish conditions under which justice and respect for the obligations arising from treaties and other sources of international law can be maintained, and to promote social progress and better standards of life in larger freedom….”
In spirit and intent this preamble parallels the mission of the IU in 1929. Many Georgists seem to be disconnected from the fact that the Georgist paradigm is, first and foremost, entrenched in Human Rights and Justice. It is not simply a way to decrease taxes. It is a universally-applicable means by which humankind may live together peacefully and productively. — T.C.N.M.

History! The creation of the United Nations was not a short or inevitable process. It did not emerge directly from the defunct League of Nations, though at least six of its auxiliary bodies were incorporated into the United Nations.

The moniker United Nations was first coined by President Franklin Roosevelt during WWII, and it referred to the twenty-six nations fighting the Axis Powers (Germany, Italy and Japan).

At present there are 193 Member States in the United Nations, and two Observer States, the Holy See and the State of Palestine (which does not enjoy voting rights). There are 4,665 NGOs that have Consultative Status. I find that I often have to remind people that in 1945, most of the people of the world were under the yoke of colonialism. As a result the hard fought battles for independence and personal freedom were not adequately resolved.

Many of the agencies and programs of the UN were initially established to rebuild a fractured Europe after WWII. There is a common belief that the global south suffers from gross inequities because of racial- or regionally-based ignorance or ‘primitiveness.’ This ignores the continual plundering of resources in the global south — and the numerous conflicts waged to protect or capture those resources. Many states were forced to sacrifice economic self-determination in order to gain political independence. Natural resources were owned by the colonial masters and their allies; value was added, and profits taken, abroad. The ease with which local Government corruption is used to explain away underdevelopment effectively erases history and rationalizes the status quo.

GJ: It has been pointed out that some nations, including China and Nigeria, have employed land value capture policies in ways that have exacerbated economic injustices. How should Georgists respond to difficult political facts such as these?

From a very early age I learned that Foreign Policy informs Domestic Policy and vice versa. It is crucial to understand the history of these policies as implemented in particular countries. If we can point out the internal and external mitigating factors that serve foreign and (certain) domestic interests, we can start to see why LVT implementation is so difficult.

There are some in the Georgist community who advocate removing the “Free Trade” from the IU name. The problems that exist in China and Nigeria are too complex to delve into here as it pertains to the system of land value capture. It may be argued that the problem of unfair and protectionist trade policies, monopoly and the external pressures of foreign interests may better address the economic and social injustices that exist in these and other nations.

There was and is an asymmetrical approach through the UN in regard to fundamental political economy. That is why our advocacy there is of the utmost importance.