One reason why many people are in poverty and why heavy taxation is needed to help them is the cost of housing. From time to time, because of fluctuations in real estate markets, poverty touches more people than usual. 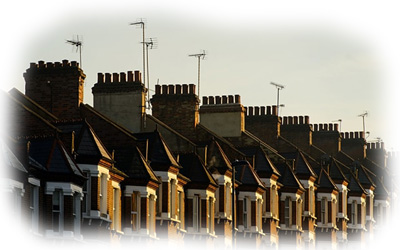 For example in the United Kingdom in the early 1990’s about 250,000 families had their homes taken from them following a housing price crash and the associated unemployment. That was one in every ninety families.

There are few investments as good in the long term as land-based property, that is real estate, but the accompanying speculation exacerbates poverty. In Japan from 1955 to 1990 residential land prices multiplied by 200 times whilst wages rose only 21 times, making it impossible for most young families to buy a home. These things need to be taken into account by all advocates of Basic Income if the poorest among us are to be permanently helped.

It surely is obvious that land holds a vital place for human life. There is pressure to use land that is readily accessible to existing population centres and that is where it fetches particularly good prices. What gives land in a particular place its value? It is partly what a government will permit to be done there, but this itself has always been driven historically by one factor — the success of the society in which the land is situated. Let us look first at an extreme case of an unsuccessful society — one where law and order have broken down, say in a war zone. There is no incentive to settle there. In such a place you will have great difficulty selling land – there are few buyers around and you will get little money for it; low land values are an outcome of the disorder and failure of that society at that time. But, look at a successful city or town or region, where basic utilities are present: water and electricity flow, rubbish is collected, streets are safe, banks are open, businesses can be run profitably, there are schools for children, good laws are enforced, the media is free, and so on. People want to live in such places. There is a high demand for houses, since there are jobs, and for offices, shops and factories; business opportunities abound. Even obsolete buildings rise in value because the land they sit on is appreciating. The successful society generates the demand which brings high land values.

What is the human mechanism behind the success which gives rise to land value? How does it occur? Who creates it? Clearly every society is the product of the success of its forebears; we build on their achievements in our generation. But it is not one of us alone who creates the success. You may be a doctor or a farmer; a bus driver or a government minister; a banker or a teacher; or a parent at home with the children. It is you, together with all of us, and myriad others, who contribute our small parts to the whole successful society. Thus it is that the wealth seen in land values is a by-product of everyone’s contribution. This contribution is partly through people’s ordinary work and partly as they display the characteristics of good citizenship such as being law-abiding, respectful of other’s rights and so on.

One outcome of each person’s contribution of work is already paid to them as their wages or salary. Let us call this the ‘primary’ wealth from their work. Another outcome of their work is the wealth within land values. This is a ‘secondary’ wealth from work. To repeat: there is one work and there are two benefits from it. Benefit number one is your wages or salary. Benefit number two is the land values, generated by you, but only as you are part of the whole community.

It is because the secondary wealth effect in land is usually so certain that many people invest in real property beyond their own personal needs. They hope to take some of the gain from the secondary wealth flowing from everyone’s work and good citizenship. These speculative buyers, by increasing demand, raise land prices even higher. If you buy real estate, you alone cannot add to the value of the land that comes with it. You can add real estate value by building a house, or by extending an existing house, but you cannot add to the value of the land itself. This is particularly clear in the case of the owner of an empty plot of land, who keeps it for a while and then sells it at a profit. Value has been added — but not by the owner. The value arose from the dynamic community that made the land desirable.

When income arises from work done it is seen as elementary justice. It is an aspect of the work ethic — wages are a natural and proper outcome of work. But people who own no land will get no ‘secondary’ benefit of land value. The work ethic does not function for them, even though they have contributed to it through their work and displayed good citizenship just as much as the real estate owners have.

So how can this value in land, produced by all, be captured for all? Through the taxation of land values for the purpose of funding a Basic Income. These two are a logical and fair combination which will return the gain to its rightful source, that is, to all citizens equally. It is justifiable and morally compelling. It can be seen as part of the work ethic, which in this case is that individuals be rewarded for their contribution to the success of the whole. Land value taxation is a simple, non-bureaucratic and unavoidable form of tax. Land is always there. Owners would not be taxed on the value of their buildings — only on the assessed value of the land. Typically for a house in the United Kingdom this could be one third of the total value, but the proportion will depend on the stage of the current land price cycle. 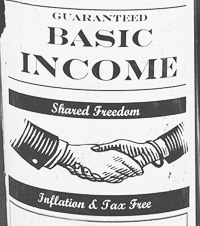 Let us note here that there is another way to solve the disparity of secondary wealth between land owners and non-landowners: nationalization. But, in my view, to take all land into state ownership would be a quite unnecessary and a retrograde step. Land value taxation funding a Basic Income would achieve all that the draconian measure of land nationalization attempts, whilst respecting every citizen and leaving those who own land to do as they wish with it. As long as they pay the rent, it will always be their land.

Having demonstrated the justification of linking land value tax and
Basic Income, we will now turn to the danger of not so linking them. If Basic Income is sufficient to bring a significant difference to the poorest citizens, it will be large enough to raise land prices. This is because some of the new cash in the hands of higher earners will go into real estate. Thus could the Basic Income be the very means of negating some of its own good effects. Do we really want to give the poor a Basic Income which, whilst appearing to bring hope, might actually undercut their new benefit and yet again restrict their property choices?

Basic Income funded by land value taxation is a simple and satisfactory solution. The land value tax would cut the speculative attraction of real estate, and this would reduce land prices, or at least steady them, and with them housing costs for everyone. Low-income renters would gain in two ways: by adding to their household income directly, and through moderated rents. Low-income homeowners would be protected, by their Basic Income, from any penalty arising from the new tax. The need for government housing subsidies in both cases would be reduced. By taxing land value and funding a Basic Income from it, a virtuous circle would be generated in the cause of poverty reduction.

But what will voters with higher incomes, who own their homes, say about the new tax? What is in it for them? Currently their long-term plan might be to cash in some of the gain from their home’s land value. But they might never actually obtain cash profit from it, due to the timing of the real estate cycle, or a personal disinclination to sell up when faced with it. The answer for the majority of these voters, I suggest, will be in the monthly cash benefit of the Basic Income. There would be prizes for politicians who ensured that the total Basic Income for most home-owning households exceeded their land value tax liability!

There is a satisfactory symmetry, a balance, in the funding of a significant Basic Income with land value taxation. There is the justice of rewarding people as individuals for the secondary wealth that they collectively produce. There is the security of knowing that speculative forces will be restrained from inflating the cost of such a basic human need as a house or apartment. This is a compelling rationale that should appeal to any nation and across a broad political spectrum. I would be very concerned for the effectiveness and long term success of a significant Basic Income introduced without consideration of its effect on land values. I commend a land value funded Basic Income for reasons of logic, justice, simplicity and permanent effectiveness in reducing poverty.