I picked up Beyond Brexit: The Blueprint without great enthusiasm — but I’m happy to say I found it very impressive: an entirely worthwhile read. However, I’m afraid this review must begin with a couple of caveats. To begin with, I’m reminded of Bob Clancy’s oft-repeated observation that Georgists aren’t competent to review Georgist books. They are too familiar with all the ways in which these points have already been made. It may be impossible for someone like me to empathize with a fresh 21st-century reader of this work. Many have advised that we vet our material with focus groups, and I agree — but, of course, such efforts cost time and money. I think Harrison & Gaffney’s new book is a Deafening Report of sorely-needed sense — but will new readers see the cat? It’s hard to say: as of today there are no editorial or reader reviews on the book’s Amazon page, and I haven’t been able to find any non-Georgist mentions of it online. Let’s work on that, shall we? 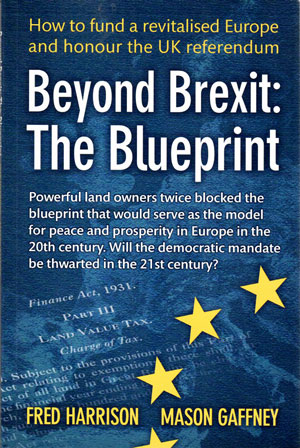 My second cautionary note is that I’ve never been super-impressed with Fred Harrison’s writing style. It often tends toward grand, sweeping statements where simple logic would do, and ascribes unwarranted precision to math-y graphs. But, once again, who am I to say? For all I know, Fred Harrison’s pix & tropes might be deuced effective. It’s even possible that people like the goony little “AGR” medallion that forms a graphic motif in this book. You never know. (“AGR” is an acronym for “Annual Ground Rent,” an entirely serviceable term, it seems to me, for that which we’ve been struggling for so long to manageably name.)

Beyond Brexit is a superb effort — one you’d do well to study.

The intended audience here is a big one: voters who are exercised over the issue of Brexit — mostly pro, but con also — or in other words, every single thinking person in Great Britain, most Europeans, and even a few Americans. Harrison offers us a magic show in this book: he has a radical point to make, one his audience cannot possibly see coming. To get them there he must engage in prestidigitation. It scarcely matters whether the UK stays in the EU or leaves it; most of its people are screwed, either way — except that Brexit offers Great Britain the opportunity to align its public revenue policy with natural law and economic sanity. The people who chose Brexit are quite aware of their economic and social problems, but they have no earthly idea how to solve them. Harrison builds carefully on rhetorical links to where his readers are coming from, making a simple remedy appear suitably sophisticated and hard. Does this strategy work? I dunno, but if it doesn’t, it’s not due to any lack of skill or ingenuity on his part.

In truth, the solution is by no means limited to one time and place. The AGR policy has always been the answer; there has never been a time when it wasn’t the answer — but one cannot come out and say that. One has to float like a butterfly: Theresa May, for example, “walked into the biggest trap of all when she scoped out her plans on taxation,” delivering a statement that was “literally Churchillian in its significance.” That means one thing to most readers, but in terms of Harrison’s thesis, it stings like a bee: after all, Winston Churchill (early in his career, anyway), was an outspoken supporter of the AGR plan.

The book is full of examples like this. In a section on the rising scapegoating of Muslims, which has been strengthening nativist movements across Europe, we read

The outbreak of violence is the usual culmination of a long period of social exploitation, discontent and the build-up of animosities expressed as communal strife. According to senior politicians in Europe, the continent is now witnessing the return of Weimar Republic-like conditions.

Those two sentences pique the interest of readers concerned with social justice and/or political stability, either or both. Then Harrison tells them Brexit offers the opportunity to forestall the historic consequences of war. The Brits, in the course of their Article 50 negotiations, can hold out a vision of the future that works for the EU as well as the UK.
Yes, that’s bombast: just one more way of saying the Single Tax would be a really good idea. But it’s very well-crafted bombast! Makes you want to read on, doesn’t it?

Harrison is at his most virtuosic when he covers the 18-year real estate cycle, which emerges again and again as a consequence of government’s failure to “embark on an orbit away from the gravitational pull of the policies created in days of yore by those who replaced the traditional Land Tax with Treadmill Taxes.” He draws on a wealth of well-documented material on this, often referencing his own works. He gains maximum bang-swoosh by charting and bulleting, as when he elaborates the corrosive effects of land speculation and Treadmill Taxation, visible in

Let’s linger on this bullet-list for a moment, because it’s poetry. “Hysteresis” I had to look up; it’s a term from physics that means “the lag in a variable property of a system with respect to the effect producing it as this effect varies.” Fine: it’s applicable (it even sounds vaguely hysterical). Note that the eye is drawn to read the four leading words downward: “Corrosion, erosion, decay, deficits…” and, wow, that’s pretty much how we feel about things, isn’t it? Really, the list is like a Cubist masterpiece of dysfunction; one can glean content from it in any direction or order. Fred Harrison whips up this sort of thing throughout. I feel like he’s the keynote speaker at the Magicians’ Convention. My hands are pretty good, but, damn.

The chapter on “Dealing with the EU,” makes use of a bewildering richness of current-events political detail in a way the reminds me, again, of Muhammad Ali, dancing and mugging to distract, then landing jab after jab of sensible truth. The European Union commissions studies and seats panels, which recommend tweaks to a system that can’t be fixed. It takes seven erudite, richly-sourced pages to come down to the point that we saw coming all along: “Critics of the Euro argue that the flaw with Europe’s common currency was the failure to align it with a robust fiscal system.” No argument there — people have been saying that for years — but for Harrison this is merely the jumping-off point: he has clearly shown that there is no robust fiscal system other than the one he is proposing.

Fred Harrison’s sleight-of-hand doesn’t just amaze the masses. Sometimes he deploys it to astound his fellow conjurers. He pays respectful attention to the notion that land rent can’t provide enough revenue to support a modern government, citing no less an authority than Joseph Stiglitz — and then goes on to essentially posit the ATCOR principle, explaining that “the clarity needed to realise that current taxes are, ultimately, at the expense of rents, was undermined by the post-classical economists who shredded the distinction between public and private realities.” This is an orthodox Georgist position supported by logic and first principles, seeking no recourse to data which, in any case, doesn’t exist. In effect, this becomes a gentle admonishment to those of his colleagues who are tempted to chase the mirage of hard national-rent numbers. Similarly, while Harrison certainly plays to the angst, fear and outrage over the banksters and the financial crisis, he never suggests that the basic nature of money and banking has to change. He places the blame right where it should be: with the collateralization of land values into an increasingly risky and unstable financial system.

The volume concludes with Mason Gaffney’s masterful article “Europe’s Fatal Affair with VAT.” This previously appeared, in slightly more-carefully edited form, in The Mason Gaffney Reader, but it deserves all the readers it can find. Gaffney’s style, scholarly, straightforward and historically rich, is quite different from Harrison’s, and the transition between them is slightly jarring. However, Gaffney’s irrefutable analysis supports Harrison’s so neatly that it certainly makes sense for them to appear together.

Rhetorically, this book is a tour de force. Will it achieve its goals? Once again, I have no way of knowing, but I do know that Georgist Journal readers ought to buy it, read it, give it away, and promote it!