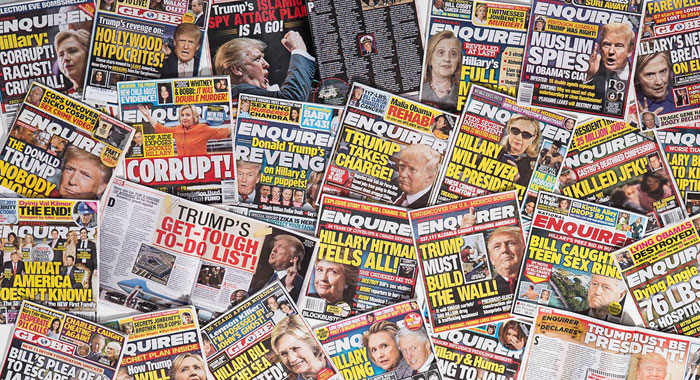 I don’t imagine that many of you read The National Enquirer — but you probably stand in check-out lines at supermarkets, so you may have noticed that this paper is very much in Donald Trump’s camp. The Enquirer’s Trump, forceful and heroic, was fixing national problems even before he was sworn in!

Tabloid ravings wouldn’t be worth mentioning, were it not that our political situation is now lodged in the realm of the unthinkable. And this is largely due, it seems to me, to the fact that Donald Trump’s appeal to the American people is on exactly the intellectual level of The National Enquirer. The reading public is shocked at the blatant lies, the adolescent
Twitter rants, the chestbeating disrespect for public service — but you know what? Every time Trump sticks it to those arrogant SOB’s, the guy in spudsville, home from his dead-end job, feels better and cracks a beer.

It’s not really about “alternative facts” or “fake news” — they’re nothing new, and the lies are easily debunked. The scarier part is when it stops mattering whether statements are true. Apparently, Trump’s strategy is to lie so blatantly and so often that his supporters will no longer trust a single thing “the media” tells them. Here are some facts: Clinton won the popular vote by 2.8 million votes… Trump’s Electoral College margin was actually the second-smallest since Ronald Reagan; the only closer one was Bush v. Gore in 2000, which was essentially a tie… the crowd at his inauguration was much smaller than either Obama’s in 2008, or the Women’s March on the following day… there was no appreciable level of voter fraud in the 2016 election… a tariff on Mexican imports would be paid by Americans, not by Mexicans…  But facts, schmacts! Trump was swept into office by a multitude of real Americans who adore him!

It may turn out to be a blessing if Trump is really as clueless as he seems. If the Republicans in Congress enact an extreme and mean-spirited agenda that creates a voter backlash, Trump will be a lame duck after two years. Although a great deal of damage will almost certainly be done, the fact remains that the current administration is a fluke. It does not reflect the American electorate in any real sense, except one: our lazy complacency. Voter turnout in this election was, relatively, quite high: 58%. That means that forty-two out of every hundred eligible voters in this pivotal, hotly-contested, loudly-covered election couldn’t be bothered to come to the polls. Seriously. 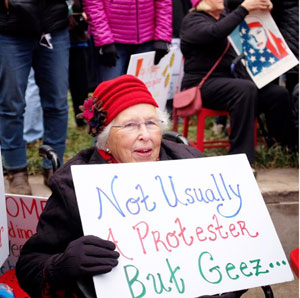 Many, myself included, have felt a sort of listless amazement that our country could have gotten things this wrong. We’ve been minutiae-obsessed, watching six different comments on every tweet. Yet the millions of people who are appalled by all this (who are not all Democrats, by any means) are being inspired to stand up and speak out. The Women’s March, which happened not just in DC but around the world, was a heartening phenomenon.

As Georgists, what can we do? Good heavens, not only do the truths we try to make clear not find easy acceptance — they face ever-stronger headwinds of ignorance and trivialization. Some years ago a colleague offered me the left-handed compliment that the Henry George Institute offers “the best Henry George Progress and Poverty course on the planet.” That’s probably true. We promise students that they “CAN understand economics!” There is hope, and great value, in that. It may be the only thing that can truly help. I imagine you recall Henry George saying, in 1879:

…in a corrupt democracy the tendency is always to give power to the worst. Honesty and patriotism are weighted, and unscrupulousness commands success. The best gravitate to the bottom, the worst float to the top, and the vile will only be ousted by the viler.

It’s still true today. We have elected scoundrels, fools and buffoons before — yet survived with the Constitution more or less intact. We need to keep our eyes open, and do our work. This issue describes some strong opportunities for progress —  ideas that shine even brighter against such a bleak backdrop.