The Trump resistance is not wrong to feel that this threat is the most dire since Nazis rolled across Europe. They see Trump taking us down the same supremacist path — and now, with climate destruction and thousands of nuclear weapons, the lesson cost would be so much greater. Why is Trumpism so dangerous? Because it is a war against truth itself. Every failed democracy first lost its way from the truth.

The USA’s checks and balances are not invulnerable. The constitution was not written with parties in mind. Almost immediately, the great chambers of debate were replaced with party bickering, and all the real decisions and discussions moved to party functions, far from public input. Washington’s Farewell Address, in no uncertain terms, called out political parties for the threat they are. This ongoing constitutional failure is part of the reason that the simple process of learning the truth has become so rare and elusive. 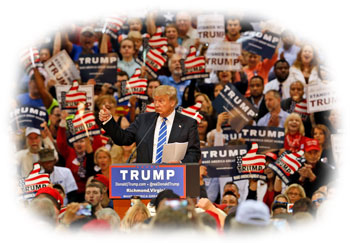 A major feature of Trumpism is contempt for the truth. Compromise and all other tools of cooperation are made out to be quaint, decadent, traitorous. The vilification goes far beyond “the dishonest media.” Protests are called “planned and funded,” unions are “greedy,” educated analysts are “ivory tower blowhards,” artists are “Hollywood elites.” Trump uses mass communication to excite, confuse, bewilder, and mislead the masses, co-opting the very medium they would need to effectively resist him. His every tweet ends with an emotional jab to the gut. Yes, he’s a narcissistic self-aggrandizing nincompoop trained in a bubble of yes men — but it’s a mistake to think that we’d be safe if we could just Dump Donald.

That won’t change the citizen rage he exploited; done poorly, it could make it worse.
The focus of the resistance has to be on reestablishing the people’s voice, and strengthening their contact with the truth. There has been progress in that direction, but it’s been short term, and merely reactionary. This is where the conservative plan is strongest: they target structure, wait for its weakness to ripen and launch sneak attacks. The left has voices that decry the weakness, yet have financial interest in the structure. Even unions, the most democratic and local structures for the people, are vulnerable in this way.

I believe the structure can only be corrected by attacking privilege directly. Few on the left ever show an interest in that. They are locked into their own latent rage, expressed in Marxist dogma, unable to conceive that Marx missed the main point. I can point to landed privilege taking five trillion dollars out of the economy each year, producing no new land or anything else — but they would not see the means of that theft. Or, I could point to the great improvement of voter empowerment that Range Voting would yield, yet they reject it, seeing only the effect on their own elite power. It’s as if too much democracy is a problem — so a corruption of it (plurality voting) is preferable.

The left is perpetually focused on politically managed solutions that require unstable concentrations of political power, building weakness right into the structure. For example, publicly financed elections require some kind of censorship to keep the access to “advertising” from becoming as meaningless and unfocused as the Internet. Who does the censoring? Or, perhaps we should roll back right to work laws — but, taken too far, that would also bring back the same union abuse that created them as an issue. All such remedies rest on an assumed intellectual privilege, and require an elite class for management: an inherent complicating weakness. A direct attack on privilege, on the other hand, would provide lasting and stable correction to the structure. But no matter: it’s always a short term emergency! Short term initiatives seem to be the best we can get.

In the short term, truth is still under attack. But with everyone now a publisher, there is so much noise, and the work of finding the truth has been dumped back in the listener’s lap.

How does one judge the new information? Placing a news report in its historical context is the best way to  reveal the truth — but how to best learn true history? The can seems to be endlessly kicked away down the road. But, I can suggest a strategy that is potent and hard to distort: to focus on the personal history of the little guy — the people who did the work. What did they eat? What did they wear? What did they talk about at the pub? Finding out why working people made the decisions they did helps to illuminate the true condition of their oppression.

As a brief example, consider the history of industrialization. Workers, looking to better themselves, flocked to places where they found low wages, long hours, dangerous filthy factories and squalid housing. At the same time, the village commons were being enclosed — snatched up by nobility and speculators. Anthropological studies show richer, longer lives prior to enclosure: so much for the munificence of job creators. A look at the common man’s diet, as shown in his bones, reveals the truth.

Literature can also provide a path to truth. It demands some interpretation, but the novels of a writer like Steinbeck are distilled working-guy histories. Their long-term relevance depends on how they echo back reality. The ludicrous situations in a novel like “Atlas Shrugged” stand out. (Seriously, if the privileged resource owners went on strike, the workers would be delighted to carry on!) In the main, the novels that remain in the literary canon are those that don’t indulge in delusion about the realities of their characters’ lives.

Trump followers seem to know nothing of their own history. The oligarchy, from generation to generation, pretty much keeps selling the same old, effective hoaxes. Steve Bannon’s views, properly deconstructed, are just the same lies rehashed. Without access to this context, voters can be counted on to keep falling for them. Notably, Trump does very poorly among two groups who place greater value on history: the  college-educated, and the minorities — who have been on the wrong end of that stick and pass on their experience culturally.

In some ways that is how the Trumpsters became lost. Labor unions were another institution that helped to pass on class experience, which helped guard members against phony populist con men like Trump. But the war on unions has been very effective, with share of union jobs shrinking to a fraction of what they once were. Forty years ago, working class voters would have laughed Trump right back up his escalator.

The campaign to alienate and discredit labor unions has been very effective. Their flaws have been blown up and celebrated. However, unions once played a major part in the economics of elections, contributing on par with the privileged. Now union influence on elections is minimal, and the people have lost their last well-funded advocate.
I always thought it was terrible that workers had to pay union dues, out of what they had already earned, to fight against the robbery of their earnings. But such is the nature of fighting parasites. “Fairness” means nothing, and one should be aware the Kochs, the Trumps, the Hedge Funders will never ever show any mercy or  remorse. They have managed to sell the story that educated elites and union stooges are really the parasites. Trumpsters, believing the hype, have effectively thrown down their shields and weapons and run to the enemy lines, where they are misdirected to attack other races and other poor workers. Now they are locked behind all their anger — but this will only be temporary. When they awake to realize they are hacking at their own limbs, their own class, the age of Trump and hate politics will end.

Our part is to hasten that process — by helping help people see, not by reinforcing their anger. Mobs and individuals are not the same. We have to open the lines of communication.

Using five key values of liberals and conservatives is one way to create a common language. Conservatives want to hear arguments phrased in terms of Purity, Patriotism and Respect for Authority. Liberals want Fairness and Compassion. Some examples: Liberals think about pollution as fairness and compassion, but is it not also purity of the environment, and patriotic respect for the country we leave to our children? Should not our parental authority be used to protect our families? Are we going to let Koch lies on climate denial destroy the purity of science? Truth is pure. We have to take the truth, and present it in the terms that people use to make sense of their world.

Truth is  always the answer — and, as always, patience is truth’s strongest ally. There is a better approach than unions and socialism — but few know that truth, even though it would puncture a wide hole in the privileged enemy lines. Endure, refine the truth and persist with it patiently and with empathy.