Many people are understandably concerned about the future role for labor in our increasingly automated economy. Considering the precarious position of laborers, these concerns should not be taken lightly. Nevertheless, this fear is rooted in simplistic reasoning. The deductive truths of classical political economy and the empirical truths of our world both reveal that capital will not permanently replace labor through any sort of unintentional economic process. It could only happen through conscious public policy.

Could robots one day become sentient, and kill all humans? Maybe. That might even somehow count as technological unemployment — but that is not the type of scenario I’m talking about. Automation can and will replace all sorts of jobs, and cause temporary displacement. Yet, in a market economy, there are a number of strong reasons to doubt that automation will ever unintentionally replace labor in general: 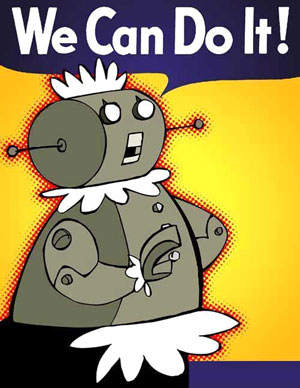 1) The trend toward Supply Chain Management (SCM), known as “de-automation.” This is the process of shutting down capital-intensive factories staffed by highly skilled laborers, and replacing them with unskilled Third World labor. Any look at the statistics of how manufacturing has actually occurred over the past century would validate this fact.
It is amusing to note the cognitive dissonance that as people are worrying about robots, the obvious reality is that manufacturing has been constantly moving away from technologically sophisticated regions, and towards unskilled emerging markets. This is a predictable thing, when we note that capital and labor are “fungible” and can replace one another as necessary.

2)  Nobody is questioning whether robots can be more efficient at producing any particular product. Indeed, many jobs that we figured out how to automate decades ago still aren’t automated. The question is not whether these jobs can be automated, but whether they will be.

There is a finite supply of inventors, engineers, and so on. Each of them will tend to apply their skills to the areas in which they can achieve the highest return. This helps to explain why don’t we have robot arms like in the Jetsons that wipe our faces for us. If you are a roboticist, are you going to work on a robot that wipes your face, or a robot that builds cars? Which is more likely to make you rich?

3)  The Law of Comparative Advantage shows that if there are two parties, and one is more efficient at every type of production than another, it is still in each party’s best interest to trade with one another as long as they each focus on their comparative advantage. This is a simple deductive truth that can be figured out with basic arithmetic. Thus, even if we make the ridiculous assumption that humans can’t beat robots in any respect, in terms of quality or efficiency, in any industry at all, then it would still be in the best interests of everyone for robots to focus on their comparative advantage, and for humans to focus on theirs.

4)  The Law of Rent shows that rents are set based on the differential between the productivity available at a given location compared to the productivity achievable on the best available rent-free land. Thus, as productivity per laborer increases, nominal wages may go up, but real wages will stay the same because rents will rise. And the reverse is true as well. If productivity were ever to go down — say because robots were outcompeting laborers — then rents would go down as well, leaving laborers with the same real wage, but at a lower cost to employers. It’s not some number on your check that matters; it’s the real wage: the standard of living that you can acquire after you’ve paid off all your rent, taxes, and other mandatory payments.

The standard of living that can be achieved without paying rent is the floor by which everyone’s bargaining power is based. In the good old days, that was called homesteading. It is the final alternative in your list of possible alternatives. Even the wages of high-skilled labor are set based on this, because everyone’s wages are based on their next best alternative. When people can live well off the land, and by their own wits, then for employers to get unskilled workers they need to entice them with a better offer. And for them to get highly skilled workers, they can’t simply pay them the same wage; they need to offer something better.

Landlords are given a government license to sell access to a location, in addition to the improvements that they are responsible for. Clearly, the price of vacant land can’t be attributed to the efforts of the landlord. Most of the rental price in urban real estate is locational value.

When determining what to charge, owners of land don’t consider the land’s production cost — it has none. They ask what their tenants can afford. We all need land, but not all of us have any, and basically there’s no unclaimed land anymore. Homelessness, not homesteading, is now the floor for wages.

As productivity rises, so do rents. But the reverse is also true. If workers aren’t in as much demand — say because robots are outcompeting humans — then rents will begin to drop. This will assist workers in their race to the bottom, allowing workers to get by on less income, and prevent robots from taking our jobs.

This process of land rents taking a larger and larger share of production, as economic progress occurs, is a key cause of wealth inequality.

5)  If we suppose that there’s an inevitable race to the bottom in wages, we must remember that neither side is static in this race. Both capital and labor can become more or less expensive. Sure, robots can make amazing gains in efficiency. When they do, the price of goods decreases. If goods cost less, then humans can achieve the same standard of living, while accepting a lower nominal wage, and underbid robots.

And, as artificial intelligence grows, this can enhance the productivity of human beings. Computers make humans more efficient, not just robots. We can become more like cyborgs ourselves; some would say we already are. If efficiency rises, demand can shoot up to such a degree that resource usage rises higher than before. This is counterintuitive because one generally associates efficiency with reduced resource consumption, but it is a well-documented fact, and high resource usage in turn raises prices. Right now there’s a scramble to mine enough lithium for all the batteries being produced for phones, electric cars, solar, etc. Rare earth elements, helium, and all sorts of scarce resources are in high demand for similar reasons. Shortages in any of these can quickly cause prices to spike, and for capital to be replaced with labor.

6)  Even though living standards are still rising, it feels as if we are in a race to the bottom in much of the world. Yet, it is not correct to assume that this race to the bottom is inevitable in a market economy. Certain insights from political economy show us how to make reforms that get us out of this race to the bottom. Most notably, a land value tax.
Want a vision of the future? Imagine a child working in a sweatshop, forever. Unless we consciously choose another path.

Automation is, more or less, synonymous with economic progress. Trying to halt automation would be like shooting ourselves in the foot, and would solve nothing. We just need to figure out how to achieve a fairer distribution of wealth, by understanding the fundamental power relationships that were revealed by classical political economists, such as Adam Smith and David Ricardo.

Prime locations are one thing robots can never create more of. We all need land, and to live where jobs are. If we share the rents that accrue from access rights to that which everyone needs, but nobody creates, then real wages can finally rise. At that point it could be financially viable for robots to actually start replacing labor.

Using our higher wages and Citizen’s Dividend, laborers could stop working so hard, but only if we want to.