It was terrible news to hear of the passing of Andy Mazzone. I had just talked to him a week before, and he was full of plans and ambition. Those of us who knew and supported him know that he took a moribund school and propelled it into the 21st century, limited by restrictive internal rules. For a time, I approached him and then Director Cay Hehner with the idea of expanding the school into Touro College’s old building around the corner with additional paid courses and RSF as an anchor tenant. The plan was ultimately too ambitious for the HGS Board. Andy and Cay and a few other HGS alumni used to participate in a round table discussion of Georgist and economic issues at Ron Rubin’s apartment. I remember it fondly. 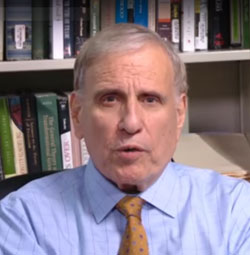 Andy was that rare businessman who wanted to give something back after a successful career, and who had the intellectual and knowledge chops to do so in his chosen second career as a political economist. His videos are thorough, well-researched and always manage to circle back to Our Solution, even to economists who don’t usually see the world through a Georgist lens. They will live on as a legacy and testament to his drive to make the world a better place. Mixing real-world skepticism with a deep core of valuing human dignity, potential, and ability to learn, he promoted his unique brand of challenging economics. He often introduced his classes with the question: “If you had a chance to make millions of dollars in just a few years, but you knew you had to do something wrong to do it, but you also knew there was a very low likelihood of your being caught, would you do it?” A better challenge to the amorality and ruthless zeitgeist of our age would be hard to find.

Andy was open to new ideas in many areas. He allowed me to arrange a meeting with a group of Thorium-based nuclear energy entrepreneurs at the HGS a few years ago too, which brought out some investors and was an excellent opportunity to advance this new-yet-old technology, as radical and right in its own ways as Georgism.

He steered the school through a difficult period with the transition from the sale of the building to the re-launching of the school as a roving institution, bringing Georgism to the masses outside of its walls — which were flooded even as the sale of the building was being completed, not an easy sell! Andy was an apt administrator, able to handle a wide variety of students, some, it must be said, who may not always have had the school or its cause close to their hearts.

From the obituary printed in the New York Times: Andy graduated from Babson College in Massachusetts with a degree in finance. He also earned an advanced degree in economics from the New School and Cambridge University. A decorated Vietnam Veteran, Andy was president of Perkin Elmer Corp., and chief executive of many other corporations. He leaves behind cherished family members and many dedicated friends and colleagues. Memorial contributions may be made in Andy’s memory to the Henry George School of Social Science.