Helen Keller found in Georgism, “a splendid faith in the essential nobility of human nature.” Indeed, our problem is not with some group. Georgists don’t personally blame landlords for poverty. The tax system forces people to “buy in” or remain disadvantaged. We are trapped by popular ignorance of basic economics. 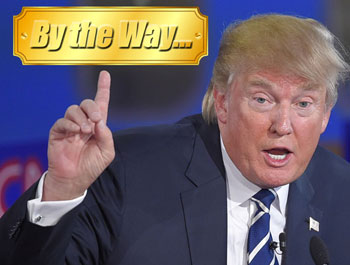 Therefore, Georgists have no villain, no “bad guys” to blame except, perhaps, the information industry, as Mason Gaffney explained in The Corruption of Economics. Thus, the knee-jerk reaction that Georgists should be anti-Trump due to his real estate empire is illogical. Besides, we have the same nemesis, “the media” (although our complaint is usually more about “fake education” than “fake news” or “fake protesters”). The source of his power being land ownership profit is actually in our favor, a useful fact for making our case. If you said someone melted politics (and the fake stream media) using the real estate system, common sense and a Twitter account, he might sound like a Georgist political trailblazer. And, as Georgists know, if he wants to keep his promises, his self-described “common sense” political direction and understanding of real estate should bring him to endorse Georgist reform.

George called his party “the Jeffersonian Democrat Party,” being pro-labor, and Georgists have been associated with “Democrats” ever since. We see how the only efficient tax system also frees individuals and that liberty is the natural state of man. George cements the case for liberty as the purpose of the remedy in his famous speech, “Ode to Liberty.” But, since then, labels like “democrat” and “libertarian” have been redefined many times. The rest of the world uses the colors, “red” and “blue” to mean statist and libertarian respectively (such as with “red China,” etc.) — but the American press, suspiciously, switched the colors of the left and right for TV “ratings.” And recently, the political forces trying to sell out American workers are not limited to any particular parties or “news” outlets. They are innumerable.

Many, Georgists included, think America is crumbling and that worldwide governance is the solution. They think that is the most peaceful path since it allows for the appeasement of bullies. The real answer is to reject deception and stand on truth, not philosophy. And the truth is, as the Dalai Lama said, “every nation should belong to the citizens of that nation.” Attempts to gain economic and military strength by forcing nations together like the USSR, the EU and the TPP fail because they fail individual human beings, distancing rulers from our concerns (becoming less democratic). The US is different, born of a public desire for independence, not unity, decentralization of power to the individual, not consolidation for the sake of unity itself. In fact, our Constitution is clearly focused on limiting the power of the federal government.

The rejection of the TPP by both Bernie Sanders and Donald Trump demonstrates that the public at large has a different agenda than many of the party-blurring technocrats at the center of the ongoing bureaucracy in charge. Their interests have been revealed by this election as those of the .01%, the finance sector, especially in the collusion of major media companies, who decidedly favored the more pro-TPP candidate, Clinton.

But, globalizing injustice will only make it more difficult to undo. The more local government is, the easier it is for citizens to control it. Right now, many financial arrangements exist which depend on the continuation of economic injustice. Ensconcing these arrangements in international treaties would, therefore, be destructive to our quest for justice. The best idea is to allow the natural state of a community of independent nations, since this allows the most people the most choice and thus, the most leverage against their local governments to be fair and efficient.

So, despite superficial appearances that paint Trump as a product of a monarch-onomy (all the gold, all the real estate, the name brand), he seems to want to be on the side of us “peasants.” He probably does not have Adam Smith or the Physiocrats advising him on the economy, but, his lack of obligation to either political party and his recognition of the importance of real estate make him very susceptible to the Georgist paradigm. Whether he winds up promoting economic liberty domestically or we have to use him as an example, at least he is not trying to make government less accountable than it has already become, by selling our law to any international regime.

One thought on “Pro-Trump Georgism”