Professor Read gives us an eminently readable book about the leading economists responsible for developing the sub-discipline of public finance. It is part of the author’s “Great Minds Series.” Given the book’s subtitle, one might have expected a chapter on each economist. Instead, the book has an historical arc and storyline that describes each figure’s contribution to this growing subfield of economics. This makes for an engaging narrative of public finance for the past two centuries. 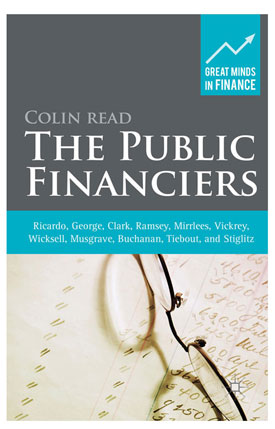 Each of the “great minds” contributions is explained, and there are short biographies as well. If anything, perhaps a bit too much attention is devoted to relating personal family histories. (Do we really need to be told that Frank Ramsey was a cute child?) Yet this book does serve to make them all more human and I think that is a welcome complement.
The stories unfold roughly chronologically, with cross-references to other contributors. Henry George has more citations in the index than any other person. George is ignored in most economic literature, but his mention runs like a mother lode throughout this book.

Read begins with Ricardo and then moves to George. Then, there is a huge leap to the early 20th century British economists — among them Pigou, Edgeworth, Ramsey, Mirrlees, and Keynes, for example — and then to some American notables in the 1950s. The bridge was provided in good part by Richard Musgrave and James Buchanan, who separately introduced the work of Swedish economist Knut Wicksell to a wider audience. Discourse became more integrated as the post-second-world-war generation grew, and Read shows how exchanges between nations and schools increased. Today, this is so commonplace that it hardly bears notice. Read also references the evolution of different schools of economics — the Chicago School often called “market fundamentalism,” the Public Choice School at Virginia and Virginia Tech, and the Institutional Economics program at UCLA.

Parts of the book are mathematical, particularly when describing the work of Ramsey, Mirrlees and Vickrey. It is revealing that all three of these figures began their academic careers in mathematics and later became economists. Stiglitz also shifted from math to economics in his last year at Amherst. Georgists know Mirrlees and Vickrey for their advocacy of Henry George’s remedy. Their Nobel prizes, however, were given for work on asymmetric information and tax policy.

One learns from the book that economists’ attention to the public sector is largely recent, the key turning point being the post-war American contributions of Musgrave and Buchanan. Charles Tiebout is mentioned perhaps because of his turn away from national economic policies to local affairs. Questions posed at this level had gotten little attention either in popular discourse or in the profession itself. (That Tiebout died in 1968 at age 43 meant that he was precluded from Nobel consideration.)

In fact awards for achievement here are increasingly hard to make, and recognition for recent breakthroughs have been ever more abstruse. The economics prize was only established in the 1960s, and by the Swedish Riksbank, unlike the original Nobels a century ago. A number of recent honors have gone to figures who are only secondarily economists, like Gerard Debra, Daniel Kahneman, John Nash, Herbert Simon, and Elinor Ostrom. With the neoclassical paradigm fragmenting, identifying an ongoing line of “mainstream” economic thought will be more and more difficult.

Professor Read brings the narrative of his public financiers full circle near the last chapter on Stiglitz’s explication of the Henry George Theorem. In doing so, he recounts the work of several figures he has earlier treated, all those mentioned in the book. They all made contributions, he argues, and it becomes clearer why George is referenced so many times in earlier chapters. The chapter on Stiglitz is really a testimonial to his work, and lists the honorary degrees, specially invited papers, conferences attended, etc., that he has received. His contributions run the gamut of contemporary economics.

Professor Read has done a commendable job in bringing into focus the lineage of thought in the field of public finance that has not been well identified in other places. This could be because public sector economics seems to be exploding in multiple directions. The single strongest theme running throughout the book is the continuing relevance of Henry George. Indeed, one could argue, his place in economics would be still stronger if the statistical and financial data were available to demonstrate the validity of Georgist claims. Reliable data on land prices and parcel use are still notably lacking.

Nevertheless, as other proposals fail to demonstrate their promise, and the gradual growth of land value taxation takes hold, the narrative that Colin Read provides in his newest book should make it worthy of notice.

There is an interesting coda to this review. Having been a professor and dean of Economics at SUNY-Plattsburgh for over a decade, and publishing eleven books, he has, just this past November, taken a leap into politics to become the newly elected mayor of the City of Plattsburgh.