It’s been nearly 50 years since I became acquainted with Henry George, and I have never been so haunted by his words as I am today.

Given a community with republican institutions in which one class rolls in wealth and the many seethe with discontent at a condition of things they know not how to remedy, and power must pass into the hands of demagogues who will seize and wield it for a time, only to be displaced by worse demagogues. The accidents of hereditary succession may sometimes place the wise and just in power — but in a corrupt democracy, the tendency is always to give power to the worst…. A corrupt democratic government must finally corrupt the people, and when a people become corrupt there is no resurrection.

Our system isn’t totally corrupt, but it is fundamentally corrupt. The foundation of American Capitalism is private property in land. And that institution is reinforced with every shift to income and sales taxes.

We’ve intervened with the Minimum Wage; by some estimates we are re-distributing nearly a trillion dollars a year with an array of welfare programs at every level of government — and even that isn’t solving the problem. 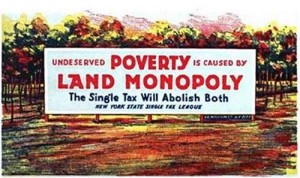 Why wouldn’t the coal miners and assembly line workers vote for Trump? He actually promised them something. They heard the Democrats’ concern for poor illegal immigrants and their kids, and the refugees who fled from the wars and chaos of the Middle East. All the while they, American citizens, were working at dead-end jobs, if they even had a job — and our government did little or nothing to help them. Meanwhile, the Federal Minimum Wage buys less of the basics than it did in 1950. During the last 40 years, the median wage increased by 10%, while productivity increased by 100%. Inflation takes more than the banks pay in interest. The rich are getting richer and the poor need more help. Henry George, your time is now!

I remember the last time we had a conference here in St. Louis. There were a number of conservatives in attendance, and someone asked: What on Earth are these “right wingers” doing at a Georgist Conference? And the answer is: We all agree on one thing. The rental value of land is a natural and just source of public revenue. That’s it — that is the bridge between the Left and Right.

But it’s a long bridge: what can we say to the Bernie Sanders supporters that also resonates with the Ted Cruz followers, yet doesn’t alienate those who voted for Trump?

We often wonder what we can learn from other movements. Can we replicate their success? How about Nelson Mandela, one of the most successful leaders for social change? The fact that he was just slightly ahead of the people he was leading is considered a key element of his success. But we are not even in the realm of the people we hope to lead.
One side wants the government to fund nothing more than police, courts, prisons and the military. The other side wants all those things plus education, retirement, health care, and guaranteed basic income. Neither shows any awareness that land is a natural opportunity, that the increase and concentration of population, as well as public investment in infrastructure and public service, ultimately ends up in the value of land. Neither the Right nor the Left has identified a moral basis of ownership.

Those on the right persuade themselves that we already have an equal opportunity, that everyone can enjoy social progress, supported by public expenditures, pretty much equally right now; poverty is merely the result of laziness or inferiority.

Meanwhile, those on the left talk as though the income gained from buildings and machinery is what exploits labor. It seems plausible to them: blue-collar workers aren’t exploited on empty lots. They earn their meager wages in factories equipped with millions of dollars worth of capital.

People look at a car factory — or a high-rise building in Manhattan. There may be a vacant lot of equal size sitting right next door. The vacant land yields no income; it just sits there. It’s the car factory with all its machinery or the high-rise tower that brings in all the money. They see the capitalist, not the landowner, getting rich.

We have to show that when buildings are added to land, there is a far greater income than the total of the land and the buildings separately could have possibly produced. That synergy results from the infrastructure and the mutual support of all the people and all the activities in the surrounding area. And, because you can’t make any more land, all the surplus is taken by its owners. The fact that most people have never thought about this doesn’t make it untrue.

Our job is to get them to think about it. Our program creates jobs, increases the supply of housing, and provides needed revenue. When it becomes a national policy, it will also raise wages. We stand for equal opportunity and a right to life, liberty, and the pursuit of happiness, just like all other Americans.

We are not about redistributing wealth — and we definitely want to limit government. We stand for free enterprise, and for private property — in everything that is produced by human labor. We want to abolish all confiscatory taxes and replace them with a charge that simply requires everyone to pay the free-market value of the benefits they receive from the government — no more.

The payment of rent satisfies everyone’s equal right to the opportunities of nature. You can’t make something out of nothing. The rent of land (which includes mineral land, the airwaves and all forms of natural opportunity) exactly equals the value of the benefit that each landholder receives from the government. It represents a synergy that comes from the cooperation (conscious or not) of the community as a whole. It is enhanced by public investments in infrastructure, the preservation of order and the administration of justice. The socially created fund exceeds the cost of government; from it, provision can be made for the sick, the aged, and the helpless. This surplus can fund Social Security, National health care, education and medical research. It can even provide a basic income for all.

Now, if we do a good job of explaining the Georgist remedy, we hear: “If it sounds too good to be true, it must be. Everybody knows there’s no such thing as a magic bullet, or a free lunch. Do you mean to tell me that in all our universities no one could figure it out that what you are telling me is true?”

Keep in mind: this ain’t no ordinary proposal. It’s one thing to advocate overthrowing the aristocracy. But we are also saying to the majority of Americans, they must give up the one thing that has gotten them off the treadmill of life.

Some people think we just might just be right about raising wages and shifting tax burdens — but what they know for sure is that they own a house — so no one can ever raise their rent. And the more time that has passed since they got a 30-year fixed-rate mortgage, the more they can afford to go out for dinner, take a vacation, send their kids to college, and actually retire when they get to 65 or 70. While renters are paying 10 and 20% on bank loans and credit cards, the homeowner knows that he can borrow for 3 or 4%. Is it any wonder the masses don’t come out and join our chorus?

Neither the logic of our arguments, nor the power of our personalities is enough. Were Churchill or Brandeis any less credible than the best among us now? Were Tolstoy or Darrow any less persuasive? Nonetheless, our proposal bridges the left-right divide. It did then; it does now.

It’s true that if we don’t stop global warming, the planet  will become uninhabitable; if we don’t prevent nuclear war, there won’t be any other problems.But do starving people worry about pollution or nuclear war? On the other hand: imagine someone who is assured an opportunity to work, own a house, and enjoy a decent life for themselves and their posterity. Would that person not be concerned with sustainability and peace?

The feeling that we are not alone in our yearnings to get this program accepted may well be the most important aspect of our Annual Conference. In the words of Margaret Mead: “Never doubt that a small group of thoughtful, committed, citizens can change the world — it’s the only thing that ever has.” I leave you with Henry George’s words:

The truth that I have tried to make clear will not find easy acceptance. If that could be, it would have been accepted long ago. If that could be, it would never have been obscured. But it will find friends — those who will toil for it; suffer for it; if need be, die for it. This is the power of Truth…. Will it at length prevail? Ultimately, yes. But in our own times, or in times of which any memory of us remains, who shall say?