I am someone who tends to give to panhandlers. I got tired of wrestling with my conscience every time a poor person asked for help, and I could afford the 50¢ (though nowadays it’s inflated to $1). When I went wandering about New York City on weekends, I made sure to have a supply of quarters in my right front pocket — but, one weekday afternoon I was walking down Park Avenue, thinking of other matters, when a guy asked me for help. My hand went into the proper pocket, and came out holding a $20 bill. What could I do? I had to look him in the eye and say, “Sorry — this is all I have, and I can’t afford to give it to you.” 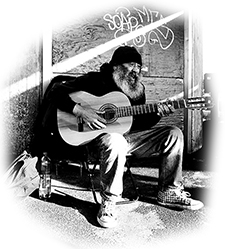 I will never forget his response. He said, “That’s all right, man. People have been acting like they don’t see me for so long, I was wondering whether I even exist!”

The existence — and growth — of “movement art” is encouraging. It is, anyway, from the standpoint of the hand-wringers among us who wonder whether the Georgist movement even exists. But I have news for you: it does. That cat on the street wasn’t invisible; he was quite substantial, even remarkably good-humored under the circumstances. The reality of his situation was evident; those pedestrians just didn’t want to deal with it, so they pretended not to see him.

I will say, though, that I appreciate those who try to earn their donations by offering something creative: a song, a magic trick… I remember one dude who worked Broadway in Astoria, Queens who had a sign that read “Please give to the United Negro Pizza Fund,” and was always ready with a joke.

Artistes are skeptical about movement art. If a piece of art is done of behalf of a righteous cause, can it be excused for poor technique, confused vision, irony deficiency? Can a polemic be a work of art? That may be an irresolvable, question. When I wrote The Sassafras Crossing, I wanted to create a novel on its own terms. Yet I couldn’t resist putting in a land-speculation subplot — does that make the book more, or less, good? (Get yourself a copy and decide: www.sassafrascrossing.net )

Young George and the Dragon 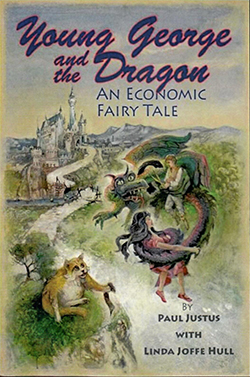 There’s been a small renaissance of Georgist art lately, and I think that’s a groovy thing. Recently Paul Justus (who has been known, on occasion, to present single tax-flavored puppet shows) has released Young George and the Dragon. To its credit, the book doesn’t try to be anything it is not: it is subtitled “An Economic Fairy Tale.” Yet its cover features a castle, a colorful dragon, a hero, a damsel, a fat (yet helpful) cat and a pair of scissors. It’s a pretty good yarn. Young George, who adored the lovely Alexis during his inexplicable Econ class, gets magically pulled down into the goldfish pond behind the Chinese restaurant where he works — and finds himself in a mythical countryside that is being taxed to ruin by despotic rulers. These rulers have been brainwashed by an evil wizard who turns out to be none other than the Econ professor himself, who never even remembered George’s name. The beautiful Princess Alexis is held prisoner in a castle dungeon, so she won’t witness the penury and injustice of her father’s realm. I don’t want to give away too much of the story, but I am charmed by the way Justus makes that pair of scissors the hero’s weapon of liberation. They cut the ties to erroneous thought and to a system of pitiless exploitation. Does George get the girl, and find the economic holy grail? Get the book.

Young George and the Dragon is a bit too grown-up for very young readers. I could actually see it working well in a high school economics class, perhaps with an accompanying study guide to tease out its references. The book makes no bones about offering a message of economic reform — but the Georgist message is obscure enough that it will put readers in a secondary kind of suspense: wondering which ideology the author wishes to teach them. That could make it serve as an excellent — and painless — discussion-starter.

Though it’s a totally worthwhile read, the book does have a few amateurish kinks that I hope Paul Justus will work out in later editions. Though he generously lauds the work of Linda Joffee Hull, a professional editor, the book could have used some copy-editing; there are a few misdefined words, and some ponderous sentences. The back-cover copy could be rethought to make the book more inviting, and the website needs work. But none of those things are deal-breakers: I suggest you get six copies of Young George and the Dragon, and give five away. 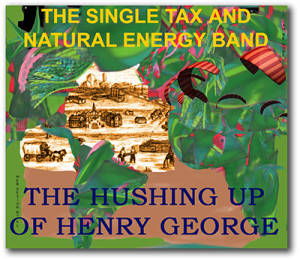 This month Wyn Achenbaum passed along a delightful reach-out email from a chap named John Harris, whose mind had been quietly blown by a book called Progress and Poverty. He had been writing/playing rock and pop music for some time — but recently he’d been devouring Georgist material on the Web, and one thing naturally led to another. So John and his mates, Matt Hall, Stuart Bickel, Del Bartyle and the late Dave Martyr, put in more than two years of focused after-hours work to create an album, by the Single Tax and Natural Energy Band (STANEB) called The Hushing Up of Henry George. You can find their album and hear their songs at www.staneb-music.org .

Now this is a very interesting set of music, full of inspired moments and intriguing contradictions. For one thing, don’t be put off by the kludgy website: these guys are musicians, not Web designers. Their hearts are right on their sleeves, and that’s their charm. They have been working on this album for quite a while, and they aren’t boys (John Harris let his age slip: three years younger than me) yet their “sleeve notes” display an almost giddy level of enthusiasm:

We’re definitely the sort of band that want to talk about how the front cover came about.  It might even be the best bit, maybe it’s all downhill from here. If that’s as far as a viewer goes, we will have at least have registered that there’s some strange funny business gone on involving a bloke called George.  But further than the story of the cover, we’re… just a bunch of musicians who ache to record an album and then found there was something very real to say; what’s much more important is what happened to us…. It was, is, an electrifying experience to understand what Henry George has explained, and we saw everything afresh with new eyes, with just the vaguest feeling that we’d maybe glimpsed it all before.  That’s how we became the STANEB, because we write songs, and what it is we desperately want to communicate is now the most important thing to write songs about, or do anything about.

Sound familiar at all?

Their album is a mixed bag. I don’t recommend every track, but some of them are excellent, and I think this album deserves the promotional effort of every red-blooded Georgist out there. (Can somebody volunteer to make them a website?) Space prohibits a track-by-track review, so I’ll just tell you about the songs I especially like.

My favorite is “See the Cat,” a two-minute funk-rock tour de force that doesn’t have too many lyrics. (STANEB’s less-successful songs have too many words.) People at Georgist conferences should be dancing to this.

“Energy is Everywhere” is a song I’d love to hear on the radio: a new-wave anthem about the ubiquitousness of renewable energy in our world. It’s driven by no-nonsense Ramones-style guitars, and sends a message that can neither be avoided nor denied.

“The Greatest Scam in the World” has a ponderous, one-word-one-beat rhythm in its verses that put me off at first, but then I envisioned it being played live in a club, and I thought it just might work in that context — to get people to hear a message that’ll stop them in their tracks.

The album contains a couple of songs which, John Harris says a bit sheepishly, were in the band’s repertoire before the sea-change of P & P. But he shouldn’t apologize for them, because they’re very strong cuts: “Gulf Stream” and particularly “Quit Stoning Our Romance” are quirky, interesting love songs that bear repeated hearings.

All in all, the music of The Hushing Up of Henry George is way better, to my ears, than the album’s presentation. In a few email exchanges with Mr. Harris. I’ve been urging him to edit. I still hope he and his band will shorten the name of the group from “Single Tax And Natural Energy Band (STANEB)” to “Natural Energy Band” — and of their album title from The Hushing Up of Henry George to The Hushing Up. Of course, it’s up to them. But I think they could actually sell this thing. It’s good work. 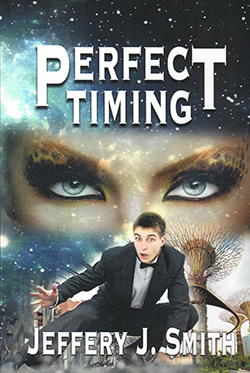 Then there’s the inimitable Jeff Smith. We’ve heard for some years that he’s been working on a Georgist, science-fiction-comedy screenplay. This year, he has issued it in the form of a novel: Perfect Timing. It is available at amazon.com, in both Kindle and printed editions, and RSF is distributing it as well.

It’s the story of “carefree caterer” Crik, whisked from amidst a hail of gunfire into a wondrous future that he seems to have had a hand in creating. His guide to that future is the beautiful, cat-styled Tepper, who may be a distant descendant of his. If he can demonstrate that he really inspired this “Geotopia,” he’ll live — if not, it’s back to the bullets. It’s quite a plot, and it offers a striking panorama of wondrous processes that a geonomic corld would make possible. Unfortunately, the frenetic action and present-tense narration make it a bit of an annoying read — it would almost certainly have been better as a movie. It has garnered some good reviews, though; our colleague Brytan Kavanaugh writes,

Once you’re immersed in the storyline, the action and array of incredible characters becomes compelling. Is Crik the unwitting reason the economic future has changed for the better? Is Tepper his great-great-great granddaughter? Can he get back alive? Jeffery J Smith threads sharp scenes together in masterly fashion in this amazing race against time. Throughout frenetic action, the ideas that generated this new world gradually expose themselves…. A great excursion — progressing at the pace of a bullet!

It’s to be hoped that GJ readers will support their colleagues’ creative work — and that this trend toward “movement art” will continue! 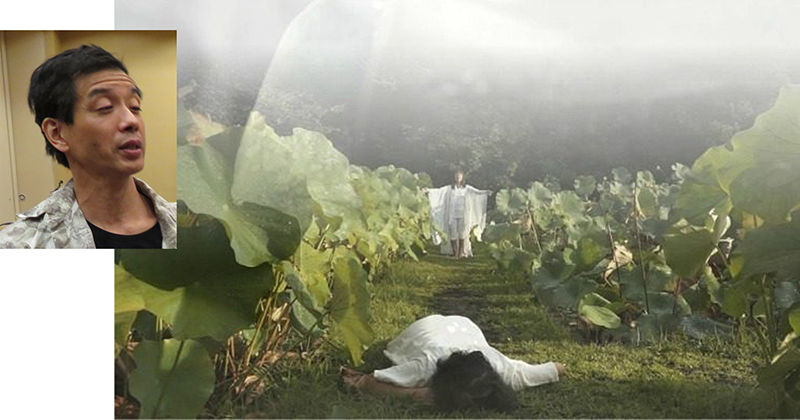 At the St. Louis conference, Osamu Uehara presented a video/discussion about THEM, a multi-media dance performance dealing with the internment of over 100,000 Japanese-Americans and Japanese immigrants in concentration camps. Internees were instructed never to speak of the camps. As the generation ages, a few have reluctantly been persuaded to recount their experiences. Choreographer/Director Janet Aisawa’s interviews with internees from her own family’s communities was the springboard for the creation of this work.