Some years ago as I was slowly building a biographical history of the Georgist movement, I came across a 24-page book titled Whose World, written in 1944 by Margaret E. Bateman. It was clear to me that she was a knowledgeable follower of Henry George, familiar with many of the leading lights of the Georgist movement around the world. Later, I would learn that the book was published by the Henry George School in New York and that Margaret Bateman then the Director of the school.

As I began to work with the early issues of the Henry George News, details regarding Margaret Bateman began to come to light. In 1941 she had come to New York City from Montreal, Canada, to replace Ed Ross as Assistant Director of the Henry George School. She eventually succeeded Frank Chodorov as Director in 1942, serving throughout the Second World War and into 1946. Jessie Matteson, writing in The Freeman shortly after Frank Chodorov’s resignation from the position of Director, described Margaret: “Tall, gracious, blue-eyed, with prematurely white hair, Miss Bateman at once found many tasks to engage her talents.”

Margaret left a career as Sales Promotion Manager for Standard Brands of Canada to come to work for the Henry George School. Her work had taken her to many cities in Canada and the United States. On one of these trips, a friend gave her a copy of Progress & Poverty. Jessie Matteson recalled: “After reading the rest of George’s books and all of his speeches, she embarked on the typical Georgist career of talking about her new-found discovery to everyone she met. Even more, she found it creeping into her lectures before businessmen in Canada and the United States.” 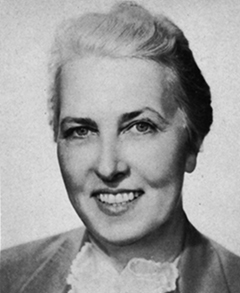 Margaret was first mentioned in Georgist periodicals in 1937, following her completion of HGS courses in Montreal. By the next year she was serving as Associate Editor of the Square Deal, published in Toronto. She had also been elected to the board of trustees of the Montreal School of Economic Science. Her first published writing was an article titled “Who Owns the Earth? in The Freeman of November, 1938. In this article, Margaret demonstrated a strong grasp of history and contemporary conditions: “In this brief journey… we have seen that where enormous areas of land are held by limited numbers of peoples, there is the most abject poverty, there is the frenzy of war – or there is dictatorship!”

She concluded that the small bastion of justice, Denmark, was uniquely poised to lead the way toward a better future.

Margaret made a positive impression on the Georgist stalwarts she met that year at the Henry George Congress held in Toronto. Her interest in education took her to New York City for a visit at the Henry George School, at its capacious new headquarters, 50 East 69th Street. Sometime thereafter she began teaching Henry George courses in Montreal at a Y.W.C.A. Her commitment to the Georgist movement deepened. In 1939, she attended the Progress & Poverty Centenary celebration in Montreal and later participated in a symposium on “Unemployment — Cause and Cure,” held at McGill University. In 1940, Margaret was elected Vice President of the Henry George Society.

Jessie Matteson wrote that Frank Chodorov “retired from the School to devote his full time to begin a book he had been dreaming of for years.” Older readers of the Georgist Journal may be aware of a different set of circumstances surrounding his departure. He was a steadfast anti-war pacifist, openly expressing  views that ran against the demand for wartime nationalist conformity. A new editor, C. O. Steele, took over The Freeman  from Chodorov.

Frank Chodorov had been a very charismatic teacher. During his tenure as director the Henry George School prospered. Extensions and affiliates were opening in cities all across the United States and in Canada. Margaret Bateman proved she was up to the challenge of maintaining this momentum. In the April, 1942 issue of The Freeman she stated her guiding principles:

If I should by any deed of mine – prevent even one young man or woman from entering a place where the philosophy of Henry George would be presented to him – even though the presentation were less intelligent, less convincing than my own – or put into the mind of anyone – anywhere – the thought that here there may be something sinister – unjust – unworthy of attention – if I should put one stone in the path of anyone who is laboring to make known this beautiful philosophy – I should regret it to my dying day.

During this period of great uncertainty and what in wartime always becomes an intolerance of dissent from national objectives, the board of trustees of the Henry George School decided to begin publication of a new communication tool, the Henry George News. The first issue of this monthly newspaper appeared in September of 1943. Margaret Bateman provided readers with details of how the school would move forward with its mission:

In the past year or two the war drums have sounded so loudly that the voices of many educational institutions have been silenced. But the voice of Henry George speaks more clearly than ever…. Economic enlightenment will come as quickly as we bring it. The future depends upon our charting a course and following it, setting high standards and maintaining them. 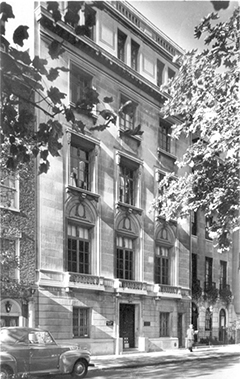 Soon the school sent a packet of Georgist literature to 6,000 Episcopal ministers, and then to 3,000 members of the Society of Friends. She reported in December that enrollment in the school’s correspondence courses had increased three-fold over the previous year.

Throughout the remainder of the war, Margaret provided readers of the Henry George News with updates on the school’s activities and achievements. Shortly after the surrender of Germany, she wrote: “The thrill of V-E Day is exceeded only by the thrill of bright new faces in the Spring classes and classrooms filled to overflowing. We intend to keep them filled.”

Not long thereafter, Margaret was a guest on a New York radio station covering the conference in San Francisco held to plan creation of the United Nations. She challenged the leaders of the world’s nations to examine the wisdom contained in Progress & Poverty. If only they had listened and followed her advice. She was undaunted by the failure of the world’s leaders to grasp the fundamental need to resolve the land problem. Her experience as director of the school strengthened her resolve. As she explained in her Henry George News column in June, 1945,

At the beginning of this war I was told that the school would close, that we couldn’t get students, that we should concentrate on our old students and give up the idea of reaching for new ones. Even now, some people tell us there is no hope. I cannot subscribe to this idea. In spite of the war, with so many of our friends in the services, so many have been seen on air-raid duty, volunteer services, Red Cross and other war work, we have gone steadily forward. We have more teachers, more students, and more friends than ever before.

Margaret had every reason to believe that the principles of Henry George would find a welcome reception in the post-war world. A correspondent in China wrote to her that Henry George’s ideas and his influence on Sun Yat-Sen were widely appreciated and discussed. Chinese Georgists were already planning to establish Henry George Schools in every major city of China. In March of 1946 she offered an additional assessment of school’s potential to be an effective change agent:

The school, as set up by Oscar Geiger, seems to have succeeded fairly well thus far in making sound and steady progress. Its foundations are solid, its general policies are practical, and its prestige is growing every day…. Let us remember that the ideals for which we are working are far greater than any of us individually. It is up to each one of us to contribute as much as possible in accordance with his own abilities, and to remember that others are conscientiously doing likewise.

Sometime during 1946 Margaret Bateman resigned as Director of the Henry George School in New York and returned to her home in Canada. I have not yet uncovered any information that explains her decision. Of course, what also occurred was the return of Georgist men from military service. This included Robert Clancy who, prior to joining the Army in 1942, had served on the editorial board of Land and Freedom. He was chosen to succeed Margaret Bateman and continue the program she had worked so hard to develop and promote. Robert Clancy reported in 1948 that the school had twenty-two branches, reaching thousands of students each year.

Margaret Bateman attended the 1949 international conference held in England. She presented a paper on “The Need for Co-ordination and Dissemination of Information on A World Scale.”

At the same conference, Robert Clancy reported that during the war, the Henry George School had “confined itself to the effort of staying in business,” but now that the war was over, “the School proceeded to give attention again to moving forward.” His published report did not mention Margaret’s contribution during the war years.

Margaret died in 1976. I have not yet discovered the details of her life during her last thirty years. She attended the 1962 international conference in Odense, Denmark. After that, her name does not appear as an attendee of any subsequent Georgist gathering.

Margaret Bateman was a force to be reckoned with. She was a person possessed of a well-developed since of purpose, with the intellect and personality to draw others to her. She is one of those on whose shoulders we stand today.