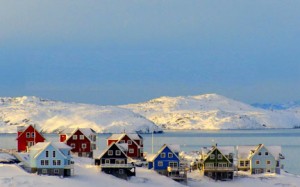 Up until recently, here’s how much I had thought about Greenland: it was a big old white landmass on a map of world resources, so I stuck in the resource label “Ice” as a joke. However: it’s an ill wind that blows nobody any good. It’s possible that the strange winds of global climate change will blow some good things to Greenland, the oft-forgotten largest island in the world. It’s not a sure thing, but it’s tantalizingly possible. Greenland’s situation right now is fascinating — and Georgists would do well to pay attention to it.

Climate change, manifested in melting glaciers and rising sea levels (not to mention changing migration and weather patterns) is by no means theoretical in Greenland. Here’s a poignant example: here, as in so many other places, indigenous ways of life are slowly adapting to the dubious advantages of modern civilization. Hunting and fishing are still economically important to many Inuit Greenlanders. Few make their entire living from it, though; many more supplement what meager jobs they can find — particularly on Greenland’s rugged Western coast, three-quarters of which is above the Arctic Circle. Traditionally, hunting out on the pack ice was accomplished using dogsleds. Young men, who are more attracted to modern things in general, are more likely to rely on snowmobiles — but in recent years their elders have been trying to convince them to go back to the old ways. Why? Because it’s safer. The ice is getting thinner and thinner. Dogs can sense when ice is too dangerous to cross.

Greenland remains a province of Denmark, though it has its own Parliament and Prime Minister. Most of its public spending comes from an annual subsidy from Denmark of about $600 million. However, some 88% of its population are Inuit, and the main language is the native Greenlandic. In a non-binding referendum held in 2008, voters favored independence by 21,355 votes to 6,663. (That may seem like a small turnout, but in fact, it represents 48% of the entire population.) As popular as independence from Denmark is, though, it seems unfeasible if Greenland cannot become economically self-sufficient.

That, however, may soon happen. A number of recently-emerging factors are making Greenland’s economic future seem bright, and they all have to do with global climate change. To begin with, its southern cities (and they aren’t big cities — the capital and largest city, Nuuk, has just over 15,000 people) are attracting more cruise ships during the summer travel season. In the long run, though, the bigger story is that receding glaciers and sea ice have begun to make offshore oil reserves, onshore natural gas deposits and rare-earth minerals accessible to mining. And if that weren’t enough, the prospect of Arctic-ocean shipping, due to greatly diminished ice, would bring international trade routes right past Greenland. 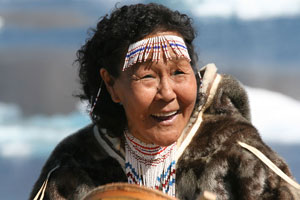 When all these large-scale economic changes come, it’s likely that Greenland will decide that its North American neighbors have more to offer it, in terms of trade and defense alliances, than its Scandinavian colonizers. But, would such an arrangement be good for the people of Greenland, not to mention our ever-more challenged planet? The resource curse has proved contagious among postcolonial nations; Greenland seems likely to catch a bad case of it.

It would be a shame if it that were to happen, and we Georgists did nothing to stop it. At this point the conventional wisdom seems to be that in order to have any chance at secure self-governance, Greenland would have to seriously play ball with corporate interests — a la Nigeria. But there might be another, far healthier game for them. It seems to me that it would be helpful if the people of Greenland were to realize that the resources of their nation belong to them. Furthermore, it would be very helpful indeed if the people of Greenland were to realize this truth not just in an earthy-crunchy moral sense (which is now 99% of the world will take it, if such an announcement is made) but in terms of practical economic and fiscal policy.

Now, the people of Greenland might not want gigantic oil rigs churning away during the three or four months of total winter darkness. They also might not need to make such a Faustian bargain. Remember, the country only has 57,000 people. As global demand for rare-earth minerals grows, and their major supplier, China, is starting to run short, the lodes of niobium, tantalum and stuff under Greenland’s thinning ice cap get more and more attractive. Could these things be mined sustainably? There is concern. Greenpeace has had a strong presence in Greenland for many years, and its folks tend to think it can’t. Then again, though, Greenpeace’s presence in Greenland seems motivated more by a concern for the entire planet than for Greenland itself, or its people — and this has engendered some resentment. In 2010, for example, Greenland’s Socialist prime Minister, Kuupik Kleist, spoke out against Greenpeace’s action to shut down a deep-sea exploration rig, stating that “This is clearly an illegal act, ignoring the rules of democracy.” Additionally, Greenland joined in protesting the European Union’s 2010 ban on seal imports.

Some observers tend to stereotype Greenland’s Inuit population as beaten-down, alcoholic-tending natives seeking what they can get from the outside world. Others are eager to romantically praise and defend their traditional culture. It’s likely that both sides make accurate observations. Greenland’s indigenous people face the same dilemmas and challenges that native peoples have faced for centuries. But there are differences. For one thing, seldom before has a First Nation made up 87% of the population of a resource-rich emerging country. 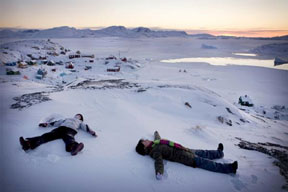 All of these facts, plus the fact that Greenland’s population is so small (any of New York City’s 59 Community Districts has half-again as many people) could offer the Georgist movement an amazing opportunity, if we could summon the courage and resolve to go for it. It would need to be a team effort, and it would require financial support. But: there is already a wealth of good Georgist material in Danish (which is the second most-spoken language in Greenland). There are any number of Indigenous-rights organizations that are concerned about Greenland, with whom we could make common cause. Facebook tells me it has 9,400 users who speak Greenlandic. Icelandic pop star Bjork once dedicated her song “Declare Independence” to the people of Greenland.

Could we cure the resource curse, and bring the Alodia story to life in the real world? We only won’t know if we don’t try.