Suppose you were one of the very few — suppose you sometimes felt you were the only one — who knew well the rare and all-but-forgotten insight that could arrest and reverse the ruinous progress of the world. Suppose you were in fact the sole repository of unique wisdom discovered over one hundred and fifty years ago, wisdom once widely discussed, known and admired, but now buried under the weight of academia and official contempt — an edict to ignore and forget — set upon it by the few immensely powerful people who have the loss of wealth and power to fear from the wisdom.

Suppose that in that insight lay the path toward the eradication of grinding and widespread and growing poverty and all that comes with it — the fear of poverty, war, corruption, oppression, institutionalized cruelty. 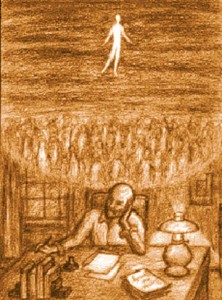 Suppose that those who are most respected for their knowledge and understanding of such subjects, in fact all of the official figures of authority, were arrayed and could be relied upon, through long habit and financial encouragement (of which they may sometimes hardly be aware), to deride and decry any notable public recommendation of that wisdom.

I think, first and foremost, you would have put the calculation of odds, the analysis of prospects for success, entirely behind you. Your adversaries, in the inevitable fight to disseminate understanding, would, perhaps rightly, call you Quixotic. Doomed to almost certain failure, you would have to disregard odds in order to act.

Courage, then, would have to be a starting point. Henry George possessed that kind of courage. He would take on anybody — motivated by the insight that the social “institution” of private property in land is the cause of our greatest social ills. He was naturally determined, witty, ambitious, sanguine, and above all he had heart. He enjoyed a fight and he had the mental and spiritual equipment to carry it on

To pick up the mantle where it has lain fallen for many decades and bear it on, one would need something like that.