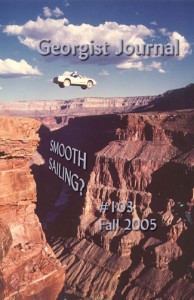 Suburbs Benefit, So Why Would They Criticize Sprawl? — Josh Vincent

Poverty Does Not Have To Accompany Progress — Justin Paré

The Meaning of the ‘Single Tax’ — Richard Giles

Terror and the State of Israel — Fred Foldvary

Georgism on the Eve of the Great Depression — Ed Dodson

By the Way: Seeing What’s There — Lindy Davies

For those who see Truth and would follow her; for those who recognize Justice and would stand for her, success is not the only thing. Success! Why, Falsehood has often that to give; and Injustice often has that to give. Must not Truth and Justice have something to give that is their own by proper right — theirs in essence, and not by accident?                   — Henry George