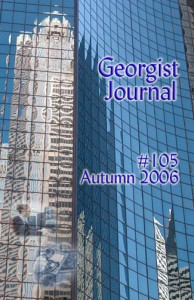 Is Henry George (and Are Today’s Georgists) Wrong About Free Trade? — Lindy Davies

Make Immigration a Win-Win for Everyone — Mike Curtis

By the Way: The City Wreckers — Nicholas Rosen

Association in equality: human beings coming together freely to cooperate in the gathering of goods, the making of clothes, the building of houses, to play, to sing, to dance, to court and marry, to beget and rear children, to share joys and sorrows, to worship and pray. Association in equality! Another expression of the idea of the Fatherhood of God and the Brotherhood of Man. The theme that runs through the Law and the Prophets. The law of life repeated and refined by a young rabbi from Galilee in the words “Love thy neighbor as yourself.”                 — Sam Venturella