One hundred years ago, Cleveland was the sixth largest city in the United States (today it’s the 41st, with Philadelphia in sixth place). Mayor Tom L. Johnson was nearing the end of his fourth and last term. Though he failed to win reelection, his faction still captured most of the citywide offices and remained a force in Cleveland politics for decades.

Tom Johnson’s father was an Arkansas cotton planter who, his son says, always opposed slavery. But just prior to the War Between the States, the elder Johnson had over 100 slaves, and he became a Confederate officer. The family was cast into poverty by the dislocations following the war. Young Tom, age 11, started his first business venture. They were now living in Staunton, Virginia, which had only a single daily train connecting it to the outside world. The conductor on that train became friendly with young Johnson, and made him an offer: “How would you like to sell newspapers, Tom? I could bring ’em for you on my train, I wouldn’t carry any for anybody else, and you could charge what you pleased.” The arrangement lasted five weeks, and Tom earned $88, a pretty good wage for that time and place. He later wrote

The lesson of privilege taught me by that brief experience was one I never forgot, for in all my subsequent business arrangements I sought enterprises in which there was little or no competition. In short, I was always on the lookout for somebody or something which would stand in the same relation to me that my friend, the conductor, had.

At age 14, Johnson entered the world of full-time work, starting in a rolling mill. No monopoly there, so when, through family connections, he was offered a clerical position at a Louisville street railway, he readily accepted. He did well, impressing his bosses enough to be promoted to secretary of the corporation. They also decided to hire his father as superintendent.

Johnson saw the need for a better fare box, and so he invented one that could reduce cheating (by displaying fares for all to see), and automatically count the fares. This he patented, forming the Johnson Fare Box Company. The company and the farebox were successful, and similar designs remained in use for a century. Johnson travelled the country selling the fareboxes, which is how he came to meet with the president of an Indianapolis street railway in 1876. That president did not wish to buy any fareboxes — but offered to sell the company. Backed by his former employer, Johnson bought it. Eventually made it profitable and sold his interest. 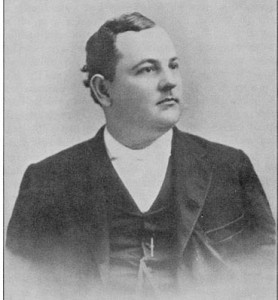 Many years later, Johnson would explain how he made money in street railways. Asked “You wouldn’t buy anything that wasn’t earning anything, would you?” He replied, “My dear sir, that is the way I have made all my money: buying things that other people didn’t know how to handle.”

Tom Johnson was a street railway magnate by the age of 22. Of course, he had the advantage over many of us, that he had only spent one year in school. He acquired street railway interests in Cleveland, St. Louis, Brooklyn, Detroit, Lorain, and Johnstown. He also developed, patented, and manufactured a girder groove rail that could withstand the heavier streetcars coming into use as cable, and later electricity, replaced horses and mules. Other Johnson enterprises serviced and manufactured electric railway motors, and welded rail. As Johnson later recalled, “My training as a monopolist had gone far. No wonder I liked my business.”

He established a partnership with Arthur Moxham to build a rail mill at Johnstown, that location chosen because it was near a reliable steel supplier. They made sure to purchase extra land near their factory site, which they subsequently sold for a profit.

After the 1889 flood destroyed much of Johnstown, Moxham was “elected dictator.” Johnson arrived the next day from Cleveland, and remarked that the cleanup process went well when no money was available, but as soon as donations started arriving from the outside world “the town quit work and it seems as if every inhabitant was bent upon getting a share of the cash.” Eventually Johnson recommended that “the money be converted into silver dollars….loaded into wagons, hauled out and dumped into the streets where the people might literally scramble for it. It was now absolutely certain that nothing could be done until we got rid of it…”

Around 1883, not yet 30 years old, wealthy entrepreneur Johnson was on a train between Indianapolis and Cleveland. A newsvendor was selling George’s book Social Problems. Johnson didn’t think he’d be interested in “the social evil,” but here another railroad conductor comes into the picture. This conductor, overhearing Johnson’s comment, said that the book was not about that, and that it certainly would interest him, and that he, the conductor, would refund Johnson’s 50 cent purchase price if it didn’t. Fifty cents, at that time, would have been a fair portion of the conductor’s daily pay — so let us give thanks for dedicated single taxers wherever they happen to appear.

Johnson read the book and was fascinated. He then read Progress & Poverty. It sounded true, but as he later wrote, “the things I was doing were the things this man was attacking. Attracted to his teachings against my will I tried to find a way of escape. I didn’t want to accept them; I wanted to prove them false.” So Johnson went to his lawyer, L. A. Russell, and said “I want you to read this book and point out its errors to me and save me from becoming an advocate of the system of taxation it describes.” He also insisted Mr. Moxham read it. The first time through, Moxham marked many passages he thought “departed from logic.” Then he read it again, erased many of the marks, read it a third time and erased all of them. 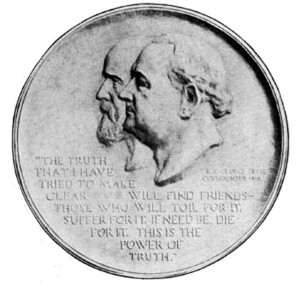 In New York on business in 1885, Johnson visited Henry George at his Brooklyn home. Johnson said, “I can’t write and I can’t speak, but I can make money. Can a man help who can just make money?” George suggested that, if he tried, Johnson might be able to write and speak, and encouraged him to consider going into politics. Johnson became involved in the Georgist movement, promoting the ideas and participating in meetings. Johnson did financially support George and Georgist organizations, but he did not address any crowds until 1888, when, at the insistence of Mr. George, he gave what Louis F. Post called “without exception the worst speech [I have] ever heard.” Johnson kept at it, however, and after a time became such an effective speaker that most of his electoral opponents declined to debate him.

George and Johnson became close friends. They sometimes traveled together, even vacationed together, and George’s Fort Hamilton home was built on land given by Johnson, whose father lived nearby.

Johnson continued to be active in business and, as late as 1888, was so uninterested in politics that he had never voted. That year, however, he received the Democratic nomination for Ohio’s 21st Congressional district. The campaign gave him important political experience, and he just narrowly lost the election.

But he won in 1890, and again in 1892, becoming one of several single-taxers in Congress at the time. As a low-ranking representative, he ended up assigned to the Committee on the District of Columbia. He formed and chaired a subcommittee that investigated assessment procedures in the District, and introduced a bill to reform them. Of course this bill did not pass, but it was another learning experience for Johnson. He also conspired with other Congressmen to get the entire text of Protection or Free Trade into the Congressional Record.

Losing the 1894 election, he attended to Detroit and Brooklyn street railway interests. But after a time he found that business was no longer “fun,” and he wanted to do something else. He disposed of most of his business interests, remaining active in Democratic politics. In 1901 he said that he would not be a candidate for any office but would work for the “principles of democracy.” However, a month later he found himself drafted to run for Mayor of Cleveland. Somewhat similarly to the way George was drafted in 1886, Johnson was presented with a petition, in this case containing 15,862 names.

There are many remarkable things about Johnson’s administration, but I think two special aspects stand out. First, his personality and ability to work with people was key to his success. A prominent Republican said Johnson “radiated such charm and enthusiasm that friend and foe fell helpless before him.” He could get just about anyone to work productively for him, and kept many officials from the prior Republican administration.

And then there was the tax school. As Johnson put it, “the greatest of all privileges is that of having someone else pay your taxes.” The tax school was intended to end that. Directed by Peter Witt, the Tax School created what amounts to a Geographic Information System. Huge maps, sixteen feet square, displayed every parcel in the City. They showed the assessments, with inequities highlighted. Citizens and taxpayers were asked for comments, records of sales and leases were reviewed, and equitable assessments were produced. The Board of Equalization then signed off and — the system was so effective that the State abolished the local Boards of Equalization, replacing them with state-appointed Boards.

This led to Johnson’s vigorous 1903 campaign for Governor. Opponents accused him of being a “socialist” — making no specific charges — and he was defeated.

Late in his Mayoralty, Johnson lost his fortune. This was due to a confluence of events, including his decision to concentrate on municipal problems rather than spend time dealing with business matters. He was not in poverty, but in 1908 he had to sell off his automobiles and his mansion, and move to an apartment. Ever optimistic, he said to a reporter:

Why did I choose the course I did?… Its not because I’m a philanthropist, for I’m not. I acted from a purely selfish motive: I wanted happiness and nothing else when I closed up my business affairs and took up civic activity. And I’ve been happy, too.

Johnson remained in office through 1909, losing that election and, in failing health, dictated his autobiography only because he was too ill to do any “work.” Tom L. Johnson died in 1911, at the age of 56, and is buried adjacent to Henry George in Brooklyn’s Greenwood Cemetery.

He remains honored in Cleveland, and according to Melvin Holli’s survey he is the second greatest mayor in American history, after the incredibly popular Fiorello LaGuardia. What does Tom Johnson offer 21st-century Georgists? Maybe an example to follow, if we’re capable, and surely a picture of what Privilege can do to those who may effectively oppose it.

And one wonders how things might have worked out had Barack Obama encountered the right conductor.