The earth… and all things therein, are the general property of all mankind, from the immediate gift of the creator…. There is no foundation in nature or in natural law why a set of words upon parchment should convey the dominion of land. — William Blackstone (1723-80)

How simple, how clear — how fundamental! Thanks be to Progress of Australia for printing this powerful wake-up call on the front cover of its January-February issue!

Directly relevant, the January issue of Comment [of Perthshire, Scotland] carries an article “Killing Kenmore in the Name of Tourism.” Its content too is simple and clear — the sad story of a massive increase in time-share development. But what we read is not fundamental — and therefore it misses the real case against such developments.

The quotation from Blackstone stands before us as irrefutable: a clear and fundamental truth. If we are unwilling to acknowledge it, or to face its implications, then it is with us as Leo Tolstoy wrote in his article “A Great Iniquity” on this very matter. We decide “not to think about it, to ignore the truth, and to occupy [ourselves] with other absorbing affairs.” Leo Tolstoy was a hundred years on from Blackstone, and we are a hundred years on from Tolstoy — and do we still choose to “ignore” this matter, while “occupying ourselves with other absorbing affairs” — such as time-share developments? If we persistently fail to confront our fundamental situation, a treasured village like Kenmore may well be snatched from us. Such is the reward of our failure.

It happens that Comment has, over the past seven years, published no less than nine articles on this fundamental matter of rights to land — articles which have taken the matter well beyond Blackstone, via the work (so admired by Tolstoy) of the 19th Century American, Henry George, whose passionate search for the key to a just society led to his rediscovery for our time of the natural Law of Rent. 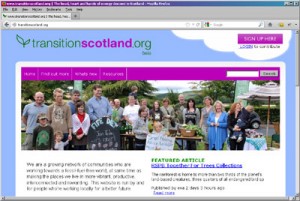 The Transition Movement, in Scotland and many other places, seeks to understand and facilitate the transition to a sustainable, locally-based economy that does not depend on fossil fuels.

Let the bones of the matter be stated therefore once more, lest a rising tide of ‘Kenmores’ should engulf Scotland at a time when councils will do almost anything for money — in our economic catastrophe born, naturally, of the same persistent “ignoring” of fundamentals. For those sub-prime mortgages were simply counters in a reckless casino game played out upon a scenario of false land tenure — more specifically upon the long-standing fiction of land price.

Fiction? Land price? But a moment’s reflection makes it plain that land price has never existed — that no capital sum has ever been paid for land. For since the first man to occupy a piece of land paid nothing for it, so there was naught for him to recoup when another took his place.

Today’s ‘land market,’ flaunting a capital sum called land price, is thus entirely bogus. In reality it is a market in exclusivity — simply the assurance of private and peaceful possession of a space of one’s own on this earth, a prime need of every human being. But does this exclusivity apply only to the exclusion of the previous occupant? Of course not! it ensures the exclusion from it of the entire surrounding community. Then should not this exclusion cost be paid to the whole community? Of course it should — and moreover, it should be paid as an annual rental, since this will allow for the inevitable variation in rental values as a community changes, while also acknowledging anew, each year, the changing population with whom this contract is made.

The vital importance of recognizing the land price scam is, of course, that that scam underlies the whole issue of land robbery which leads to the ultimate dispossession of the people from their land. A fictional land price leads to a fictional market in land-as-capital, thence to a buying outright of land, thence to the buying up of land: land hoarding. All of this works to the elevation of the few and the increasing ruin of the excluded masses — and ultimately (as today) the ruin of an entire economy through operation of this blind, unbridled greed over land. Our sacred Gaia! (Verily, “whom the gods would destroy, they first drive mad!”)

From all this we can begin to see that our endless discussions today — with their huge expenditures of time and energy — on how to achieve ‘community empowerment’ are another totally bogus carrying-on, serving only to aid and abet the arrant robbery of both our land and our revenue. What will rid us of this curse? Only the bringing of society into obedience to the natural Law of Rent. Once holding land is converted into a liability, instead of an asset, land will not be an investment proposition — each instead will choose to occupy only what he himself can properly use.

So, instead of new ‘Kenmores,’ a new horizon indeed! A realistic transition to a society composed of awakened communities! And such communities, having their land and its revenues at last in their own hands, will find small difficulty in making that ‘transition’ to a sustainable society which we know is essential if the human race is to survive on this earth.

Thus it is good to see the four-page spread, in January’s Comment, concerning the new “Transition” movement now afoot, and I appreciate the enthusiasm of those who have contributed it. At the top right corner of its front page we read the words that “we will not be able to create a positive future by ignoring the challenges and pretending they don’t exist” since that would be to “sleepwalk into the future.” However, it must be said that nowhere is there a single mention, or even a hint of awareness, of the greatest transition we must surely make: that is, the transition to confronting and dealing with the all-underlying land question. Without this most essential of all transitions we will indeed be sleepwalking into the future!

I am sure that those who drew up this document did so with most sincere good intentions, but inevitably, without this first and most essential transition, most of its content is, most unfortunately, turned on its head.

To quote from a certain “centre for stewardship:” “we see stewardship as the act and art of holding and nurturing assets for others … buildings, land,” etc. But the vast majority of our population has for centuries, perforce, been doing just that! — “holding and nurturing” them for the ‘landed interest’ which holds Scotland in its grip!

As just one instance: a highly skilled therapist, resident in Highland Perthshire, who as the price of having a place to live must pay rent of many hundreds of pounds a month, ere even beginning to think of general living expenses. This case is multiplied over and over again across the country. What else is this but the “nurturing” of monopoly — the most destructive force in our society! Do you think that such a person, having to work every possible hour to meet the scandalous sum, will have time or energy to partake in a ‘transition’ movement — whose feet are so far off the ground?

Comment extols ‘Community Resilience,’ urging that we find “optimum living arrangements consistent with the new realities,” without a word on how society shall free itself from its present “reality,” by which it is indentured to a system that has no foundation in nature or in natural law? Shame upon us! The first “transition” we need to make is one that will set the people free! — to live a natural life and not a cruel and unnatural one. If we need to look into “needs and dependencies,” then clearly the first thing to look into is just how much the ‘landed interest’ of Scotland depends for its needs upon its indentured population!

We are warned about finding ourselves possibly “only nine meals away from anarchy.” Yes, but a breakdown in infrastructure may not be the most urgent threat. Apart from our disappearing bees, what about an agriculture highly dependent on oil? Here, happily, we find Russia blazing a trail for us — with her dacha movement, which of course involves the land question!

During WWII, to increase food production, millions of urban Russians were provided with dachas in the country. These were humble (often wood-built) dwellings, but with each came an area of land big enough for a family to feed itself from throughout the year — and often with a surplus! It has just come to light, from the country’s official statistics, that “70% of the country’s population grow their own food on their plots [and] collectively provide far more vegetables, fruit, and even meat and milk than the whole country’s commercial agriculture taken together”!* We’d better get cracking! — or the day will arrive, sooner or later, for the painful realisation that central government hasn’t the faintest notion of how to provide the population with food!

I congratulate those who have taken the time and trouble to give us this four-page spread on the transition movement here in Scotland, and trust that it will now go forward — but with the recognition, in doing so, that the all-essential fundamental basis of true community empowerment, which cannot be overlooked, is Justice in Land Tenure.