Herbert Bigelow was the righteous young Pastor of Cincinnatti’s Vine Street Congregational Church in the final years of the 19th Century. He became famous (and infamous) for his sermons, which were uncompromising, both in their excoriation of hypocrisy and in their support of the single tax. This piece is taken from the collection published in 1916 as The Religion of Revolution, with an introduction by Mary Fels. Bigelow also became a leading figure in Ohio’s “civic revivalist” movement. A leading advocate of direct legislation, he served as President of the state’s Constitutional Convention in 1912. He was also elected to the US Congress in 1937.

But seek ye first his righteousness, and all these things shall be added unto you. — Jesus

Once upon a time there was a community of just two members. One was a workingman. There has to be someone around who works. This workingman did what all laborers must do — produced food and raiment by applying his labor to the resources of the earth.

The other member of this community was a very lordly person, very lordly and lazy. The lordly person did no work, yet he was clothed in purple and fine linen and he fared sumptuously every day. 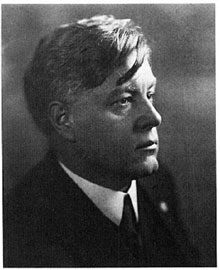 One day a third member was added to the community. The third man was a preacher. The lordly person had more food and raiment than he could consume, so he agreed to give some to the preacher. In return the preacher was to look after the spiritual welfare of the community of three.

Having a preacher, the lordly person wanted a church. Therefore he ordered the workingman to build it. Having the church, and the preacher, they decided to have a go-to-church rally. They got the entire community out to a meeting.

The lordly person sat on the front seat. The workingman was up in the gallery. The preacher took for this text:

But that did not happen. Something more astonishing than that happened. On this occasion the preacher preached the truth.

“Brethren,” said he, “this text can be understood only in connection with the other text:

But seek ye first his righteousness; and all these things shall be added unto you.

Then the preacher turned directly to the lordly person in the front seat and said:

The heavenly father does not want any of His children to have to be anxious about food and raiment. That man in the gallery is anxious. It is mockery to tell him not to be anxious. Sir, it is because you produce nothing, but eat the fruits of his labor. Seek first the righteousness of God. Let justice be done, in this community. Let each man work and live upon the fruits of his own labor. Then all may be free from anxiety.”

The lordly person arose in his seat with gathering wrath. Trembling with passion, he cried out:

“See here, you young theologue, who pays your salary anyway? I want you to understand that as long as I pay your salary you are to stick to the gospel and let the labor problem alone.”

The preacher was amazed, but he was not in the least cowed. As soon as he could comprehend what had happened, he said:

“Apparently I have made a mistake. When I came to this church I thought it was a house of God. You appear to consider it your house. I supposed that I had been called to preach the Gospel of Jesus, the whole gospel with all its power to save and free and bless mankind. You say that you will tolerate only a part of the gospel. You insist that I fill every sermon with half-truths, which will not disturb any of your privileges, but which will keep the workingman contented with his lot.

“If this is what you expected of me, then off with these vestments; take your church. I’ll preach the gospel on the street-corners if necessary. Nay, this workingman and I are a majority in the community. We will unite. With our votes we will decree a revolution. We will establish the righteousness of God. We will make honest laws. We will stop paying you ground rent. We will pay our taxes out of the ground rent you are now collecting from us. We will take enough of this ground rent so that we can loan ourselves capital. One man shall not be enslaved to another because he does not happen to inherit the capital needed to make his labor effective. We will take the full ground rent and this shall make the land free and industry tax-free, and capital accessible to all on easy terms. Then, sir, if you will not work, you will starve. This will be freedom for the workingman in the gallery, but it will make you free also. You will not be free to rob your brother. You will not be free to charge him for his own God-given birthright; you will not be —”

“Yes,” shouted the preacher, “and CHRISTIANITY.”

But the preacher was not through.

“Did you expect me,” he continued, “to preach, in the name of Jesus, that these monstrous privileges of yours are honest property rights? Did you expect me, in HIS name, to defend all this slavery, and to blot out from the souls of men the mighty hope that was born in Bethlehem, the hope of justice and good will, the hope of heaven on earth?

“Rather, I will go into the highways and preach the gospel of Him who had compassion on the multitude. I will preach to men who will pray with their ballots. I will say to them: ‘Come, let us establish the righteousness of God. Let us destroy every privilege of law by which one man appropriates the fruits of another’s labor. Let us create a new public opinion and decree justice, that none of God’s children need be anxious about food and raiment, that all may practice the precept of the Sermon on the Mount.'”

But that preacher had a lot to learn. He lost his job. That goes without saying. He expected that. But something else happened which he did not expect. He went to the workingman and outlined his plans for a Christian revolution. But the workingman refused to join him. The workingman in the gallery was with the lordly gentleman in the front seat.

So the preacher turned to the book of wisdom and added a proverb, coined out of his own experience. It was this:

The mind is the seat of slavery.