Conversations about poverty — about our world’s dire social and environmental problems and what can be done about them — tend to be shouted from two sides of a very distinct fence. On the one side are “champions of freedom” who insist that people are responsible for their own situations and things like foreign aid and redistribution just mollycoddle and foster laziness. On the other side are “upholders of justice” who rail at the arrogance of the privileged rich, heedlessly using all those poor people to create the surplus they enjoy. But there is still left in the world a small group of beleaguered, disdained Georgists, standing atop the fence imploring first one side, then the other, then both, to listen to reason before it’s too late.

When it comes to the question of poverty, though, one group that tends to escape the attention of all three of those factions is the poor people themselves. And with that in mind, I have to say that one thing The End of Poverty? does exceedingly well is to present the real voices of poor people: Kenyan tea pickers, Peruvian garbage sorters, Bolivian silver miners, children and their parents living in streets and slums. They are shown talking soberly about their lives. By focusing entirely on economic issues, the film’s interviews with regular people avoid both sentimentality and distraction, and they are very effective indeed. 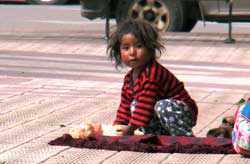 The film would have done well to devote more time to letting poor people speak for themselves, for it dashes many people’s hopes for a breakthrough presentation that answers the question its title poses. Instead, it plants itself firmly on the left side of the fence and calls forth a long line of experts to hurl invective at the other side. This process begins with the title itself. Its question mark seems to be a sarcastic response to the 2005 book The End of Poverty by Jeffrey Sachs, which proposed to address poverty by providing basic infrastructure and education for developing countries, and then embracing market economies and globalization. The over-arching message of this film, narrated with gravelly gravitas by Martin Sheen, is that imperialism created the hell of global poverty, it was on purpose, and that globalization is imperialism 2.0.

While it was in development, the film’s hefty cost prompted much skepticism and finger-wagging among the Georgist ranks, which was mostly unfair. Clifford Cobb, recent Program Director of the Schalkenbach Foundation and Executive Producer of the film, patiently explained that, “this film was never intended to be an explication of the Georgist philosophy. In early discussions with the Director, Mr. Diaz explained that he could make an explicitly Georgist film that would be viewed by hundreds of people… Or he could make a non-didactic film with much subtler Georgist themes… [that would] potentially reach an audience of millions in commercial theaters.” This was a sensible point, and it would serve to quell Georgist second-guessing, at least until the film appeared.

The problem, though, is that The End of Poverty? is not non-didactic. It has a clear, consistent point of view that, aside from acknowledging the basic problems, has no truck whatever with the Georgist philosophy. “They are poor,” director Philippe Diaz said in an interview, “because we are rich.” After seeing the film, longtime Georgist activist Jeff Smith commented, “This film makes my job as a Georgist harder, not easier.” The End of Poverty? goes to great pains to reinforce the mindset of its target audience: left-leaning, anti-globalization, well-intentioned, CIA-hating middle-class progressives. The film seems to have gained ideological velocity as it was being made and edited. The first working title we heard was Access Denied, which sounded like an OK name for a Georgist movie. Next it was tentatively called Manufacturing Poverty (this can still be seen on some YouTube promos). Plans originally called for interviews with poor people in New York and Los Angeles, but if such footage was shot, it didn’t make the final cut. This was a sore point with the Georgist audience in Kansas City, but it was plain that the film’s basic orientation and message precluded discussion of poverty in the Rich West: in this movie, poverty is a creation of the Rich West, cruelly and knowingly inflicted upon the Poor South.

This message is carried is carried by a parade of experts. I found this “appeal to authority” exceedingly annoying. Some of the experts are relatively big names, such as John Perkins, Susan George, Amartya Sen, George Stiglitz and Chalmers Johnson; others are respected but less-known scholars in relevant fields. Does the reader recognize the faces of even the five “big names” mentioned above? The End of Poverty? flashes each expert’s name very briefly, in small, faint type, only in their first appearance. The effect of this is to provide the viewer with a powerful, unanswerable, decontextualized “expert consensus.” This, I was told by a cinema-savvy RSF Board member, “is a technique.” Well, sure — and it was used to good effect; it sealed the film dialectically against dissenting analysis.

Curiously, the concept of “natural economy” is mentioned many times, usually through Martin Sheen’s authorial voice — so it seems to be a preoccupation of the film’s writer — but it is never defined. It is contrasted to what replaced it, the “commodity economy” in which “money” is used in “markets.” It is also associated with images of pastoral simplicity being destroyed and replaced by garbage dumps which the poor must pick through for a living. The “natural economy” is what “economic growth” has taken away from us. One is tempted to suspect that this oft-repeated phrase represents some vestigial connection with the film’s initial Georgist motivation, but it comes to naught.

One of the film’s most memorable sections is its narration of water privatization, and how it was the last straw for Bolivia’s long-suffering people. The privatization of water (the Sangre de Pachamama — Blood of Mother Earth — even the private collection of rain water was outlawed!) was “the test case for the Washington Consensus,” according to expert Jim Schultz. Outrage over this evolved into a popular movement that culminated in the election of Evo Morales as President of Bolivia. The importance of these events for The End of Poverty? is to demonstrate its conception of the only way poverty can be ended: by the revolutionary determination of poor people themselves. This is, of course, both true and not true. It’s true because the privileged aren’t going to give up their cushy situations without motivation, and they are well-provisioned with military power to keep such motivation distant and quiet (the film devotes lots of footage to the CIA’s nefarious exploits in a number of poor countries). But it’s not true — at least not in any practically useful sense — and this is what make this movie so infuriating — because The End of Poverty? has the opportunity to tell people — such as those in Bolivia, Kenya, Peru, Brooklyn — about a practical economic strategy for managing the terrifying revolutionary risk they must take. And it doesn’t say it.

It is good news that the film was chosen for the Cannes Festival, an honor that will go far toward its prospects for a successful commercial run. Efforts are getting underway to utilize the opportunities this film will create for spreading Georgist understanding. I would suggest, though, that such efforts will be badly mistaken if they seek to deepen the public’s understanding of “our Georgist film.” That’s because we don’t have a Georgist film here. On the other hand, we just might have a popular film — and that’s not a bad thing. It may be that the best way for Georgist advocates to take advantage of The End of Poverty? will be not to accept and praise the film, but to disavow and critique it. We might get some high-quality soapbox time out of that.