The U. S. people may be suckers for free lunches and one-cent sales, but they do not go out of their way to get free education. Nor do they often work up an appetite for warmed-over ideas. Consequently, the gratuitous revival last week of a school of thought that had its heyday more than 40 years ago made news. As the Henry George School of Social Science bought a $50,000 building in Manhattan for schoolhouse and headquarters, disciples of Georgism disclosed that the single-tax doctrine today has some 21,000 student followers throughout the U. S., and is growing rapidly. 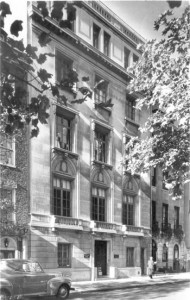 The Henry George School’s headquarters at 50 East 69th Street in Manhattan, which the school abandoned in the early 1970s.

Henry George (1839-1897), who proposed to end depressions and poverty by levying a single tax on land values, thus freeing the land for productive use and restoring to capital & labor the profits wrested from them by landowners, was nearly elected mayor of New York City in 1886. After his death, his creed languished. Only a handful of believers were left when in 1932 one Oscar H. Geiger, a businessman, started the Henry George School. Geiger gathered 84 pupils, taught them one course with George’s Progress and Poverty as the text, died at the end of the year. Next year the school got a new director and a business manager, soon was giving free lessons, mostly to middle-aged people, in YMCAs, settlement houses, clubs, schools. Today there are classes in some 200 U. S. cities and seven foreign countries, and 5,000 people study Georgism by correspondence. New teachers cannot be trained fast enough. Honorary president of the school is venerable Philosopher John Dewey.

Director is burly Frank Chodorov, quondam schoolteacher, traveling salesman, manufacturer, editor, who constantly has a pipe or cigar in his mouth. Director Chodorov last week had a simple explanation for Georgism’s revival: its simplicity. So simple that the school claims the man-in-the-street can be trained to teach it, Henry George’s doctrine, according to Mr. Chodorov, sweeps aside the “academic gibberish” with which orthodox practitioners of the “dismal” science of economics clothe their confusion. Director Chodorov also claimed that the Henry George School is free from propaganda: “We don’t make the students swallow anything they don’t like and we don’t mind arguments.” Enrolled in the school are Communists, Republicans and in-between shades. Warring equally against land monopoly and collectivism, Georgism makes its greatest appeal to lawyers, teachers, public accountants, businessmen.