The Instituto Henry George de Managua soldiers on, despite various difficulties and setbacks, such as increasing recessionary pressures in Nicaragua, a very heavy rainy season which made transportation unreliable, and frequent power outages. The 36th course in its Comprender la Economía program began with 81 students; the proud graduates are pictured below. The next course, which began in late June with an all-time record of 87 students, was suspended after the government announced city-wide power cuts, of indefinite duration, during the time the course met. Because few of the students were able to attend at a time when there would (probably) be electricity, the course has been suspended until the power crisis is cleared up. 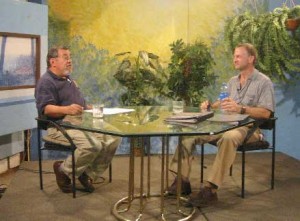 Meanwhile, student volunteers are mounting a campaign to make contact directly with the Nicaraguan media, NGOs, political, labor union, business and religious leaders, and the public in general, to present the Georgist paradigm and economic reform proposal. This past summer Paul Martin appeared in an hour-long interview on Managua TV, and published a Georgist op-ed in the daily El Nuevo Diario.

Meanwhile, construction continues on the IHG’s new headquarters. The unreliability and expense of rented quarters for IHG activities had made this a priority. A site was secured, and construction has begun — although funding for the facility’s completion remains uncertain.

Nicaragua’s new government under President Daniel Ortega is more popular than its predecessors (and represents part of the overall Latin American wave toward “leftist” populism), but it has not been successful at turning Nicaragua’s economy around. The country has few options outside of “mainstream” policies for nations in similar straits: it ratified the CAFTA agreement in 2005, and is working to secure debt relief under the IMF’s “Heavily Indebted Poor Country” framework. The United States remains Nicaragua’s biggest trading partner, and persistent infrastructure problems have dampened interest in investing there. In 2006, Nicaragua’s public debt was 83% of its GDP. 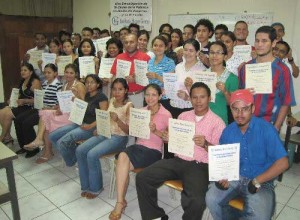 These conditions have a great deal to do with the enthusiasm shown by the IHG’s students. Nearly all of them sign a petition calling for implementation of Georgist reforms, and many volunteer to help spread the message. Naked land speculation (and the resulting bizarre land-use patterns) are blatantly on view everywhere in the capital city; students have no trouble finding examples. They see, too, that public collection of rent is the only viable, sustainable way out of the economic trap they are living in.

Uphill battle though it is, the IHG’s progress is a bright spot on the Georgist horizon. Contributions toward the Instituto’s new headquarters may be sent to the Henry George Institute, earmaked for the Instituto Henry George.