Our thanks to Josh Vincent for finding a fascinating article* by Leo G. Mazow on the single-tax roots of George Inness, an artist of the Hudson River School, which appeared in American Art, Spring 2004. The article offers a scholarly treatment of the ways in which Inness worked to express Georgist ideals in his work. It also mentioned the single-tax inspired work of the poet James Whitcomb Riley, particularly his lovely poem “The Poet of the Future,” which is reproduced here. — L.D.

In early 1889 The Standard reprinted a poem from The Century entitled “The Poet of the Future” — one of several pieces in the single-tax literature in which a poet travels back in time to Gilded Age America to inspire fellow laborers. Written by Georgist James Whitcomb Riley, the text follows the conventions of the utopian time-travel genre, popular in the period, which was exemplified by such novels as Mark Twain’s A Connecticut Yankee in King Arthur’s Court (1889), Edward Bellamy’s Looking Backward (1888), and Ignatius Donnelly’s Caesar’s Column: A Story of the Twentieth Century (1890). Riley muses that “The Poet of the Future” will be a humble producer who, like manual workers in single-tax clubs, would work for the universal liberation of all laborers….

In his similarly titled article “The Coming Poet,” George prophesied a comparable artist-seer who would address social problems — in contrast to most late-nineteenth-century American painters and writers, who, in his opinion, sidestepped harsh working-class realities. Hamlin Garland appealed to an allied sensibility when, in an 1891 theater review, he wrote that artists are obliged to be “true to our conditions” and, therefore, must avoid “melodrama” and document the “changes in social life.”

In 1879, the year of Progress and Poverty‘s publication, Inness commented on the necessity of the fine arts to portray actual, lived experience. Perhaps slighting sentimental, academic art, he noted, “In the past art has only presented ideas of truth.” Like George, he anticipated the socially responsible work of the future or “coming” artist, saying, “In the future [art] must be the expression of social sympathies — the deepest social sympathies, those which Christianity has awakened in the heart of civilization,” so that “the distinctive use of art as an element of social, and consequentially national harmony, become[s] a self-evident truth.” 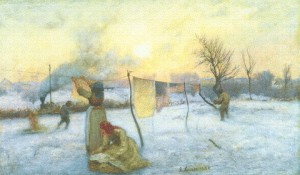 The sweeping statements by Inness, Garland, and Riley typify the vagueness and romantic tone of the movement’s call for a more responsible and socially engaging art form. Yet single taxers apparently required, at bottom, a pictorial acknowledgment of modern labor’s unseemly conditions. Emphasizing labor and producerism amid harsh working conditions in his post-1880 paintings, Inness may be considered, on several accounts, as a Georgist future poet. The newfound primacy of the human figure assisted him in his transcription of that poetry into a painterly form.

Perhaps more clearly than any other work by Inness from the 1880s, Winter at Montclair, New Jersey presents formal and iconographic systems that echo the single taxers’ calls for realism. Assembled around a clothesline, four people toil at dusk, performing difficult, tedious work in the throes of winter. The women in the foreground hang garments to dry; in the middle ground the two men, presumably drying clothes, face each other, their arched backs indicating intense labor and creating brackets around the clothesline area. Offering no signs of interpersonal communication, the figures appear absorbed in their task. The partly cloudy sky ranges in color from light yellow to burnt orange and, with the leafless trees, heavily dressed individuals, and slushy terrain, suggests the ice and numbing chill of winter. At right several houses, perhaps signifying a potential warmth and safety not enjoyed by the laborers, are visible through the trees and shrubbery. At left a train chugs along, its smokestack emitting a constant puff of dirty smoke.

Contrasting a top horizontal zone of muted early evening dusk with the lower expanse of ankle-deep, dirty snow, Winter at Montclair is certainly a study in atmospheric effect. But it is also a depiction of the manual and mechanical human labors transpiring within that winter environment. The composition dramatizes the coexistence of these two distinct modes of work, accentuating their awkward proximity and hinting at unsettling parallels between them. The figures’ faces are hidden; their torsos are reduced to broad, scumbled masses of paint; and the perimeter male figures appear to dissolve into the snow below. Producing a picture of tedious labor amid inclement weather, Inness addressed the vital, contemporary experiences that, for George and his followers, would be tantamount to “poetry” when monumentalized as art…. 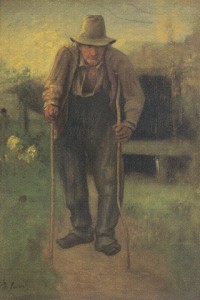 The “poetry” of realism, achieved through the figure’s position in the foreground and hence relative nearness to the viewer, achieves iconic status in The Old Veteran, a painting differing from any other work in Inness’s known oeuvre…. Like a wistful rejoinder to the earlier artwork, Inness’s veteran lacks the latter subject’s dynamism and resolve. It is unclear whether Inness’s teetering figure on makeshift canes has become decrepit due to war injuries or simply because of his age (or both). Standing before a farm and wearing oversize, soiled, unkempt garb, the figure conflates squalor, labor, and old age. With Inness’s picture, we can imagine Homer’s veteran, after some sixteen years, turning around, walking slowly to the edge of the pictorial space, his curving skeleton replacing the once-energetic physique, and his meager crutches taking the place of the powerful scythe. Inness depicted the grubby veteran and the ground beneath him in similar dark earth tones, suggesting an equation between the two: the harvesting of a new field, it seems, has produced a tired old man. With the figure dominating the compressed foreground, Inness’s painting is “true to our conditions,” documenting the “changes in social life,” as his fellow single taxer Garland would put it…. 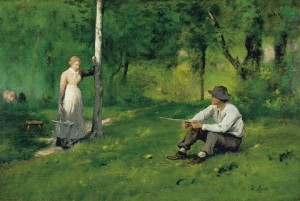 The figure-based realism of the 1880s, however, was not always a matter of squalor and physical exertion. Gossip, for example, locates activity in the foreground, but its narrative oscillates between invective and satire, more open-ended than that of Winter at Montclair and The Old Veteran. Single-tax essays and editorials frequently enlisted subtle, biting humor to wage social critiques, and Inness may register an ironic, if ultimately unresolved, commentary in Gossip. Inness depicts a woman who apparently has just finished milking a cow (she leans against the tree, with the stool behind her and the position of the pail suggesting a completed action). As if bemused, she faces the seated man, whose “non-activity” of whittling helps to establish a labor-leisure opposition, a sort of dialectic given voice throughout the diatribes of Inness and other single taxers. Whether unwitting or intended, the formal strategies and their effects in The Old Veteran and Gossip match the Georgist call for unsentimentalized plot. Placed in the foreground, facing the viewer, and modeled alternately in crisp lights and ominous shadows, the figures call attention to work, its psychic and physical toll, and, in some instances, its wry contrast with indolence.

Remarks by George Inness, from “The George Dinner”

It has been assumed, and is still assumed generally, that poverty is a natural evil, and under present circumstances I am willing to accept it as such; but I think in one who accepts the doctrine of the single tax, it must be a logical conclusion that when that doctrine comes to be applied, that poverty will become an unnecessary evil. (Applause.) For although I accept the great democratic ideal which involves that of absolute justice I see, being an idealist, that the proposed ideal can never be absolutely attained. But without that ideal no progress can be. (Applause.)

…. Under such a condition of things as we believe will come about with the adoption and practice of the single tax, the laborer will no longer be obliged to give the whole of his labor to the one who employs him. Again, he will not be obliged to beg of another work that he needs and bread to live upon.

Now I am a believer in spiritual trust because I believe that spiritual trust lies at the bottom of all voices of truth. I do not, necessarily, believe in any story that may be presented to me; it may be true and it may not be true; it may be like the story of the cock and the bull, but the substance involved in many that appear untrue frequently contains truths more profound than the political or financial prophets are capable of perceiving.

We hear a great deal of talk now about the goodness of the human heart; I deny it in toto. I do not believe a bit of it. I believe the heart is positively and distressingly weak. It is against sound logic, and a man who begins business or would commence to do anything on that theory is pretty sure to fail. (Applause.)

Some think there will be a great struggle in the single tax. Single tax is a straightforward, rational truth, and it will appear little by little to every individual mind until the majority will grow so large that the other side will be as nothing….

There is much of statesmanship, there is much of false policy in the world at present; false thinking, false education, all this will disappear as soon as the man is free from that necessary want that exists under our present political condition. And your science, your literature will increase and the general intelligence of the whole community will increase the freer you make the individual, and if the individual is wrong society will be wrong.

At present there is one principle, a … financial principle, that is universally accepted, that is that a thing that will not pay for itself must be discontinued. Society at this present day is not self-supporting; …it is supported by the individual. The individual has certain rights to that which he pays for. That which he does not create belongs to the community, and that is land.