One year things are going well, and the next year they’re not. Why is that? How does it happen that, all of a sudden, more and more people, who are willing and able to work, are unable to find employment?

An economy that’s in a recession is still composed of the same natural resources, the same infrastructure, the same buildings, tools and machinery, the same technology, the same work force, and even the same money and banking system. And yet, when it is least expected, it happens. What causes it? How could it be prevented? 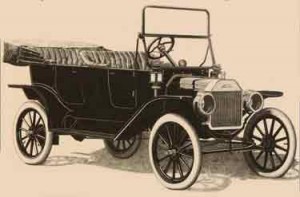 In 1914, Henry Ford introduced the assembly line. Interchangeable parts had been used before in industry, but Ford was the first to use mass-produced parts in something as precise and complex as an automobile engine. Ford paid $5 per day — twice what Chrysler and Chevrolet were paying. He could afford to. For 13 years he made essentially the same car. Half the cars in the whole world were Fords. The Runabout, which was the economy car of the Model T line, cost $900 in 1910. Its price reached a low of $265 in 1924. There was some inflation in those years; according to the CPI inflation calculator, that $900 amounted to $1,554 in 1924 dollars — a price reduction, in real terms, of 82%! A car cost less than a team of horses — and you could buy one on credit.

Four cars were produced every minute; 240 per hour; nearly 6,000 per day. The country was paving roads and building bridges. More cars were creating more jobs making steel, glass and rubber.

Eventually, there were more high-quality workers than Ford could employ, so he cut his wages in half and sped up the assembly line.

Suddenly, in 1927 Ford could no longer sell all his cars. By 1930, the greatest economy in the history of the world had collapsed.

Then: the Smoot-Hawley Tariff Act of 1930 raised the average tariff to a staggering 54%. There’s no question that it made things worse, but the depression had already begun at that point. The increase in tariffs was an attempt to counteract unemployment that followed the crash of Wall Street. So what did cause the Great Depression of the 1930s?

The first answer most people offer is: Overproduction: four Model T’s per minute! Well, maybe people were getting a little tired of Model T’s. But, without a doubt, they still wanted tractors, toasters and trinkets! The people who were laid off by Ford still wanted and needed the products of labor, and they were willing and able to give their labor in exchange for those products — but no one would accept their offer.

A similar thing had happened nearly 60 years before. In 1869 the opening of the Suez Canal drastically reduced the price of Asian goods in Europe. Basically, it cut the distance from Western Europe to Asia in half, cutting the cost of production. But there was more: that same year, in the United States, at Promontory Point in Utah, the transcontinental railroad was completed, with the driving of the last, “golden spike”. Before the railroad, it took at least two months to go from New York to San Francisco. After the railroad it took seven days. Now, you could get farm equipment to Iowa and Kansas, and mining equipment to Colorado. You could get corn and wheat from Kansas and Iowa, and raw materials from Colorado, to New York and Philadelphia — and across the ocean if the price was right.

In 1873 there came a bust: unemployment was increasing and wages were falling. Henry George observed that process — and took note of the vast, unused, unaffordable lands around San Francisco. It gave him an insight.

Suppose you own a little piece of land — say ten or twenty thousand acres. You bought it as an investment. When the time was right, you would divide it up in 160-acre parcels and sell it for family farms. It’s about 100 miles south of the railroad, so it would take about a day for horse-drawn wagons to get any of your crops to the railroad.

People are still coming from Europe, and a lot of people are migrating west. Plenty of people want to buy a piece of land, build a house and a barn, and plant a crop. They ask to buy some of your land (only a day’s ride from the railroad). Will you accept their offers?

What if you know that four or five years from now, connecting rails will be built and your land will be linked to the east-west railroad? Are you willing to sell your land to the highest bidder now — or will you hold out for a better offer?

But… Meanwhile… Where are all the people going to work?

Population is increasing, and machines like the railroad and farm machinery are replacing more workers than it takes to build and operate them. Products can be produced for less, therefore they sell for less, but that doesn’t help the unemployed workers who have lost their buying power. Reduced demand further depresses production and more workers are laid off — this time in the cities.

The depression of 1873 ended five years later — after many more railroads were built.

Production was revolutionized, thanks to old Henry Ford. All kinds of machinery was made on assembly lines.

America was still an agricultural economy. Farm machinery was getting better and cheaper. Workers were being displaced. They were going to the cities to seek work in the new factories. As cars got cheaper, more and more people bought them, and more and more roads were being paved. Now, it was far less important for farms to be close to cities. So, as the economy boomed, cities increased in population, and more roads were built. Urban factory workers could now live miles from the industrial areas, on what was previously farm land. Cheap farm land was transformed into pricey suburban developments!

Cars had never been cheaper than they were in 1927, but — nevertheless — fewer people were able to buy them. Machines continued to replace workers, as they had been doing for a decade. As the cost of production went down, business expanded; production and sales increased.

But there’s one thing they couldn’t produce — the land. Land values were going up everywhere. So the producers “downsized” — they laid off the workers and kept the machines.

What Labor-saving and Labor-enhancing additions came into existence in the 80s? Modular homes: over 25% of all detached homes were modular. High-rise buildings were built a truckload at a time with the latest cranes. They put buildings together in a matter of months that once took years. The personal computer revolutionized office work. It gave us the same result with a fraction of the labor.

And, as always, each individual labor-saving innovation brought many compounding benefits, taking advantages of new economies of scale — in what economists call a “multiplier effect”. As the profits from each new invention go up, what happens to the price which is bid for the use of land necessary to realize those profits?

Suppose you were being offered 10% more for your land than you were offered the year before, but the current rate of interest was only 6%. Would you sell? Remember, if the price of furniture and houses and computers keeps going down, the demand for land will keep going up. If your rational choice is not to sell your land yet, you can be sure that a whole lot of other landowners will see it that way, too. As demand for land goes up, the supply goes down, because everyone’s holding out for higher prices.

What created that huge surge in demand for land? Well, in 1927, it was the plummeting cost — and great popularity — of the Model T. That’s right: blame it on Henry Ford.

What ended the World-wide Depression of the 1930s? 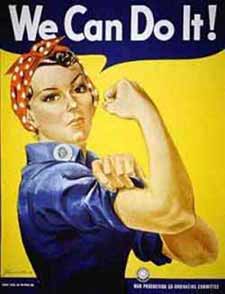 World War II. If there suddenly isn’t enough land within your own country for everyone to go to work, take the land in another country, and give it to your people. The Italians conquered Ethiopia, The Japanese went to Manchuria, the Germans needed room in Poland. Once the war begins, any land needed for producing food and weapons for the military will be put to use as soon as it’s needed — and the government will tend to be less cautious than usual about printing money.

We’ve all heard of the demand for labor created by the army. But in fact, land had to go into production to feed and clothe those soldiers and make those weapons. And on that land, a whole new labor force — American women — went to work producing goods for the war effort, and for consumption at home. They, and their husbands and brothers overseas, had money to spend now, on cars, homes, and — pretty soon, on televisions.

It was the “Leave it to Beaver” era of national prosperity. Why, we didn’t have another recession again — until the next one.