Over many centuries we can observe that major peace and disarmament treaties have kicked off land booms by lowering taxes — all kinds of taxes. We also often observe that the booms lead to busts. A few examples follow:

I. 1259. Louis IX (St. Louis) gives up warfare, makes peace all around by compromising with James I of Aragon, and Henry III of England. A skilled arbitrator, he also brings peace to Flanders, Hainault, and Navarre. This stands in well with the Pope, who gives him Sicily. Previously, 1229, France had made honorable peace with Raymond VII of Toulouse, ending Albigensian “crusade” (or perhaps coopting Raymond into it, for Louis cooperated in the papal inquisition). Louis’s skilled administration brings to France unprecedented peace and unity. As to “prosperity,” he raised land values; yet the quarrelsome city-states of northern Italy, Flanders, and southern Germany forged ahead in trade, industry, banking, art, science, and letters.

II. 1431. The French, under Jeanne d’Arc lift the siege of Orleans. Land values there rise from 16 to 92 francs per hectare (converted from ancient units then in use). 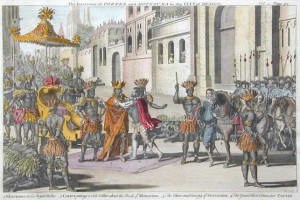 III. 1509-29. Cardinal Wolsey, counselor to young Henry VIII of England, advised “Greatness through Peace.” This held down taxes and raised English land values — and helped kick off the enclosure movement. Mania of land speculation: era of Peace and Poverty — inducing some emigration.

V. Charles V defeats and captures Francis I at Pavia, 1525, freeing Charles to return to Germany and suppress Anabaptist rebels under Munzer, slaughtering 100,000. Martin Luther supports Charles in this. Thus, a peace dividend of victory lets the ruling rentiers wage class warfare to the max, maintaining the power of landlords to collect rent, and enclose the commons. With regard to religion, the suppression of the landless was ecumenical: in Germany, Catholic Charles V, with Luther’s approval, suppressed and dispossessed rebel protestants; in England, Henry VIII confiscated church lands and suppressed Catholics.

VI. 1529. German states vote to help Vienna hold out against the Turks, who are finally stopped. Charles V accommodates with Lutherans for unity against the Turks. Inter-Christian religious wars were deferred for 89 years. VII. 1536-40. Henry VIII confiscates vast church lands. Accompanying this is a major “exclusionary shift” in nature of class war. Previously, landlords sought to tie people to land; now, they seek to evict. Thus the modern age was “born in agony” (Heilbroner), but the agony of the many was the enrichment of the few.

XI. 1556-98. Under Philip II, Spaniards considered it their duty to preserve political order and religious orthodoxy in Europe. “Political order” is code for affirming and supporting private property in land. Thus they were something like Americans today. Their Mission dissipated much of their dividend of booty from the New World. It also stirred religious civil wars in France, where Spain intervened, and provoked rebellion in the lowlands by tyrannizing and taxing them. All of that tended to cap land values.

XII. 1558. Under Elizabeth I, a reign of low taxes, peace, and desperate poverty. Poor laws, 1563-1601, recognize great poverty. It had not always been so: previous century had been one of higher wages, greater security for peasants. Elizabeth builds up surplus. Land values are high — but Spain threatens.

XVI. 1618. The 30-years war begins in Germany. It involves most of Europe, and costs are high. In 1630, Richelieu supports protestants in Germany to curb Spain. He raises taxes, and French land values fall.

XVII. 1609-48. Holland is left alone to enjoy its commercial successes, and capitalize them into land values. Peace with Spain. France preoccupied in Germany. Rival English navy underfunded by Buckingham. Rival City of Antwerp betrayed and suppressed by Spain. Great wealth-seeking outlets leads to the tulip bubble, 1634-37, a matter of great publicity, but the same search for wealth-storage and speculation made Dutch land values rise, too. Recent research by Professor Piet Eichholtz of Maastricht and Robert Shiller of Yale confirms this.

XIX. 1637. Capt. John Mason massacres the Pequods and frees Connecticut from Indians, capping off a long “Great Migration.” England was paying for military defense, levying no taxes. Yet, land speculation on the Patroon pattern sterilizes main north-south valleys of Connecticut, and of course the Hudson Valley of New York, aborting the immigration boom, leading to crash in 1640, and a reverse migration. Settlers are diverted to the thin, rocky soils, frigid winters, steep slopes, and precarious tenures of New Hampshire.

XX. 1648. The Peace of Westphalia ends 30-years war, ushering in era of peace, lower taxes and rising land values. France (and Holland) were the major beneficiaries, but French landowners rebelled. The Fronde, 1648-53, is a series of outbreaks by rural landowners against taxes. Louis XIV and his ministers and a series of influential women advisers solve this problem by moving the feudal landowners to Versailles, leaving them their rents while relieving them of feudal obligations and taxes: they become pure parasitic rent-takers without owing the state or their local people anything.

XXI. 1660. The English tire of Cromwell’s wars and high taxes. They restore the Stuarts under Charles II, who makes peace, which makes land values rise. Thomas Hobbes sways Charles and the succeeding James II to substitute sales and excise taxes for land taxes.

XXII. 1675. Louis XIV opens wars for the lowlands. Dutch land values sink (Eichholtz). Colbert had held down taxes and opposed extravagance. Louis, displeased, replaced him with Louvois, an ambitious general, 1672. His heavy spending, subsidized the English and other foreign governments, helping to raise their land values. French land values fall after about 1675. Europe gangs up on France in League of Augsburg, from 1686, to protect Holland and maintain the balance of power. 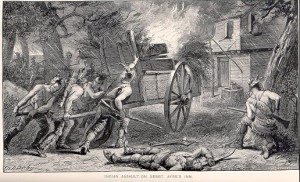 XXIII. 1676. Death of the New England Wampanoag Indian King Philip ends King Philip’s War, which was very costly to the English settlers. Maine was ravaged and took years to recover. The victory drives Indians from most of New England, opening it all for settlement.

XV. 1682. William Penn arrives in Pennsylvania, and promotes settlement. A huge migration to Pennsylvania follows, rivaling the earlier Great Migration to New England of 1630-40. We may surmise a land boom accompanied the migration.

XVI. 1685. Louis XIV revokes Edict of Nantes, opens a religious-civil war against Calvinists which was also a kind of class war, as the rich Calvinists (Huguenots) had already been coopted by Louis. Massive emigration of Huguenots. Effects on French industry somewhat comparable to effects of Spanish Inquisition.

XIX. 1704 and onwards. Marlborough rampages around Europe, humbles Louis XIV, but Brits fear his ambition and high taxes, finally rein him in. France revives, drives Brits from Spain, leading to …

XXXVI. 1783. Peace of Paris. American land values rise, especially in the West, which is now open to speculation and settlement

XXXIX. 1792. Short bust; more severe bust in 1798 helps drive Federalists and Hamilton from power, opening the door for Jefferson, whose expansionism and egalitarian land-disposal policies hold down eastern land values for many years.

XLI. 1800-13. Napoleonic Wars. Europe, preoccupied with itself, leaves the US alone, except for the War of 1812, a standoff punctuated by a final American victory at New Orleans

XLIII. 1848. Treaty of Guadelupe-Hidalgo, opens the rest of the west for settlement, sale of public lands, another land boom — lead up to a crash in 1857. Again the pattern of Peace, Boom, Bust.

XLIV. 1854. As the Crimean War removed the likelihood of European interference in US affairs, greater security bolstered a land boom in the US. Japan opened, 1854. Whale fishery thrives. China and California trade open. Clipper ships; steam navigation. All signals go! But, a sudden large increase in military spending, by England especially, and France, competing with investments in railroads (US and worldwide) could have triggered the US bust of 1857.

XLVII. 1871. The Franco-Prussian War is short and decisive, hence cheap. It leaves France with bearable reparations, so land prices rise even there. Germany gets new horizons and ambitions.

XLIX. 1898. America’s easy victory in Spanish-American War leads not to a peace dividend, but to the US joining worldwide naval and arms races. 1900-14, rearmament worldwide; world naval race. Britain introduces the dreadnought class of battleship, obsoleting the world’s fleets, opening furious building boom in many maritime nations including Italy, Japan, and the US. World girds up for World War I. Taxes of all kinds rise, holding down land prices. Meanwhile, new urbanization calls for much more local spending, paid by local property taxes.

L. 1919. Treaty of Versailles launches era of intense reaction to war. Mutual disarmament treaties all around. Taxes fall sharply. US taxes fall more than European taxes, because the US had been more influenced by the philosophy of paying for WWI from current revenues, rather than debt. US land values skyrocket — until softening in 1927, and crashing with stocks in 1929.

LI. 1945. When World War II ends, land values in the US lag rising rents for a while. A pessimistic generation sets the mood. The 1950 Korean War, and ensuing cold war, keep taxes up and dampen land values, which recover only slowly. 1965-73, Vietnam war depresses spirits, maintains taxes, depresses land values. Oil shocks transfer rents from most of the US to oil states, and other nations. 1979, Volcker revolution spikes interest rates, damps land boom.

LII. 1945-90. Defeated Japan outlaws military spending. Its economy thrives under a US military umbrella, with low taxes; Japanese land values rise to be the highest in the world. Land values rise throughout southeast Asia.

LV. 2001-present. US rentier class firmly in power. Lower taxes on property income; huge national debt and trade deficits are shrugged off. Stocks fall, but not to 1990 levels, while the mother of all land booms grips the nation.

Consider this possibility: Peaces do not last, because they lead to booms followed by busts. Nations struggling to recover from busts turn to imperialism, and/or defense against the imperialism of others. The buildup of the Axis Powers in the 1930s is a prime example, near enough to be remembered vividly.

The challenge for economists, of course, is to show how to make peace work. By “work” I refer to more than “prosperity” in the Hoover sense, to full employment with high wages and less division into classes.