Some years ago I came across a text called “We May Be Brothers After All — A letter to President Franklin Pierce from Chief Seattle, ca. 1854”. It was a stirring call to honor and respect the natural world, a message worth spreading. So I copied it and handed it out to many people. Then a New York Times article (April 21, 1992) informed me that the “Seattle Speech” of which I was so fond was a fiction. Chief Seattle (or “See-ahth”) of the Suquamish tribe in the Puget Sound region did indeed give a famous speech — but not the one I knew. That one was penned in 1971 by a Texas screenwriter named Ted Perry. “Well,” I thought, “What of it?” After all, the original speech was apparently lost, and although this one is fiction, there is a kind of truth in fiction. So I kept handing out the speech, adding the caveat that, yes, it is fiction, but it’s a worthy document anyway.

That was before I saw the true Seattle speech. It was not lost: the speech was transcribed by a Dr. Henry Smith, and published in the Seattle Sunday Star. And now that I have seen what (it seems that) Chief Seattle actually said, I am stunned by the contrast between the two statements. I think that those of us who consider ourselves “environmentalists” have a great deal to learn from this comparison. 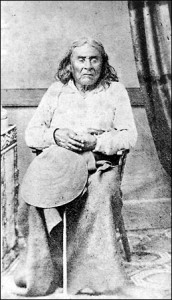 It is immediately apparent that the writer of the fiction was familiar with the original, for a number of phrases are lifted verbatim. The other thing that strikes the reader right away is that the original is by no means unpresentable; there is nothing pidgin-ish about it; it is a haunting poetic statement in its own right. Given those two facts, one has to wonder: why was there any need to re-write the speech? (The Times article suggested, incidentally, that Mr. Perry was mortified that his work came to be identified as Seattle’s words; he had only intended to write a stirring Indian Speech as part of a screenplay. Nevertheless, Perry’s fiction became famous as Seattle’s speech. It was commemorated on Earth Day and incorporated into a well-known children’s book.)

The fiction is an environmentalist manifesto. It speaks of the Indians’ respect and love for all the world’s creatures and their revulsion to the clatter and stench of the white man’s cities. It tends, in fact, to reduce the differences between the Red man and the White man to one great issue: respect for nature. It romanticizes the Indians’ relationship with the natural world. “We are savages,” the fictional Seattle says again and again, “and we do not know any other way.” The real Seattle bandies no such self-disparagement; an unshakeable dignity, in himself and in his people, is evident throughout.

The fictional Seattle actually cannot comprehend the idea of buying and selling land. The real Seattle understands it only too well, and he rejects it as fundamentally immoral. Both speeches agree (for diplomatic purposes, at least) to sell the land, on one condition. But the conditions couldn’t be more different! The fictional Seattle agrees to alienate his people’s land, to sell it to the Great Father in Washington in fee simple, on the one condition that the white man be a good steward of the land and “treat the beasts of the land as his brothers”. The real Seattle agrees to nothing of the sort. He agrees to “sell” the land, on the condition that “we will never be denied the right to visit, at any time, the graves of our fathers and our friends.” Throughout the speech Seattle makes it resoundingly clear that he is not merely talking about cemeteries: he says that “the ground beneath your feet is the ashes of our grandfathers”, that “the earth is rich with the lives of our kin”, and it is on this basis that “every part of the earth is sacred to our people.” Seattle accedes to the inevitability of the whites’ conquest of his people’s lands, but he does not agree to sell them — a sale with unlimited visiting rights in perpetuity is no sale at all!

There is another sense in which the fiction is gratuitously romanticized: it does not mention war. The real Seattle speaks of war from painful experience, and he wants no more of it. He even accepts part of the blame, noting with regret that young men, lusting for revenge against an overwhelmingly strong enemy, have worsened the destruction. But Seattle’s rejection of war is not pacifistic or selfless; it is tactical. He cannot win. “Fate hunts the red man down. Wherever he goes, he will hear the approaching steps of his destroyer.” He deflates Washington’s sham generosity with hard vision: “It matters little where we pass the rest of our days. They are not many.”

All of these differences are notable, and perhaps they will serve to kindle more interest in the original document. But they don’t explain the question we started with: Why the rewrite? Why (to let screenwriter Perry off the hook) did our culture at this point in history choose to adopt the fictional Seattle speech in place of the real one? We will come closer to an answer once we’ve examined the last — and most astounding — contrast between the two documents.

The fictional Seattle says that his people know, but whites have yet to discover, that their God is the same God, and “his compassion is equal for the red man and the white.” In the fiction this is a moving call to universal brotherhood. But the real speech not only provides no basis for that sentiment — it says exactly the opposite!

“There is little in common between us,” Seattle says. He has seen the white man’s every imperial advance furthered by some sort of invincible destiny. After all that has happened, the Great Chief Washington’s dictates seem like the words of nature itself, and Seattle replies:

How then can we be brothers? … Your God is prejudiced. He came to the white man. We never saw him, never even heard his voice. He gave the white man laws, but he had no word for his red children whose numbers once filled this land as the stars filled the sky.

The real Seattle does say, “We may be brothers after all.” This exalted sentiment forms the title of the fictional speech, but placed in context in the real speech, it must be read with a high degree of sarcasm. They are brothers only in the sense that civilizations, like individuals, fade away; that is the common destiny. But at the time Seattle spoke, the white tide had all but obliterated the last vestige of his civilization — and the white man’s religion had been instrumental in all he had achieved. About that religion, Seattle says “Your religion was written on tables of stone by an angry God, so you would not forget it. The red man could never understand it or remember it.”

If we understand the nature of this difference, then, I believe, we will see why the rewrite was necessary. If, as the fictional Seattle says, the white man and the red man have the same God, then it is possible to heal the rift between the races — and white people can do that by being faithful stewards of the land they have bought, by “treating the beasts of the land as brothers”. In effect it legitimizes the white man’s purchase of the land — or at least it leaves the door open for such a justification. If only the Europeans will stop raping the earth, then the red man’s God, their God, the universal God, will forgive them, they can atone, and they can be absolved of their genocidal history.

But the real Seattle gives the white man no such easy out. He says, “Your God loves your people and hates mine.” The white man’s God, “who walks and talks with him as friend to friend” lets him think it is all right to buy (or seize) the land and restrict the Indians from visiting the ashes of their fathers. Seattle knows exactly what he is saying: that white people cannot be forgiven for what they have done. Their “God”, which has bestowed such power to their “manifest destiny”, is a blasphemous abomination.

In the end, Seattle’s words can be seen as a curse on the white man — but Seattle only articulates the curse; he doesn’t make it. This land, he says, which is alive with the spirits of all his ancestors, is the land they have stolen; there is no legitimacy in their seizure or purchase of it. Now, he says,

There is no place in this country where a man can be alone. At night when the streets of your towns and cities are quiet, and you think they are empty, they will throng with the returning spirits that once thronged them, and that still love these places. The white man will never be alone. So let him be just and deal kindly with my people. The dead have power too.

Finally: what have Seattle’s dark words to tell us who, more than a century later, strive to heal the wounds and live in harmony on the earth that we all must share?

The first thing we must do, I believe, is to stop denying those spirits, those wronged and rended dead who live, as Seattle said, in every shadow of every piece of land that anyone has the presumption to call “property”. It is a dangerous illusion to believe that land can be bought, whether by individuals or by nations. Let us heed the message of the real Seattle — and not be lulled by the pleasant emptiness of the Hollywood fantasy.