The conference site and the accommodations could not have been more felicitous: the South Bank Campus of King’s College, London University. Sleeping and living quarters were right across the street. London’s new impressive landmark, the London Eye, aka “Millennium Wheel”, sponsored by British Airways, can be spotted behind Victoria Station. 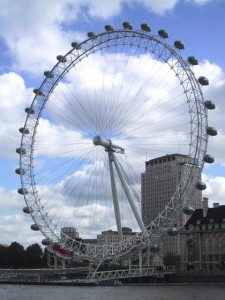 It is literally just a stroll away from the conference center. So is the Right Bank of the Thames with its many relaxed shore-side restaurants and cafes. Big Ben is nearby (you never have an excuse to be late there), Parliament (one cradle of world democracy), the Tate Museum (catch up on culture), Downing Street (talk to Tony about WMDs), and the London Aquarium (want to feel subversive or at least submersible)? All this vacation atmosphere gets punctured by policemen patrolling the shores of the Thames with bullet-proof vests and machine-guns. But neither they nor the armed police control scanning every bag and passenger to go onto the “Millennium Ferris Wheel” even raises an eyebrow: Life in the age of Terrorism. There is a life-size metal-relief monument on the other side of the Thames inaugurated a year ago by Prince Charles. It is dedicated to the RAF aviators who so heroically fought of the London Blitz: “Never in the history of mankind have so many owed so much to so few!” in the words of Winston Churchill.

On Monday, July 3rd, the 25th conference of the International Union for Land Value Taxation and Free Trade started with a bang. We were welcomed by IU President Dr. Tatiana Roskoshnaya, who now works for the UN Habitat in Nairobi. Fred Harrison’s opening address set out the “Terms for a New Society” in which he further elaborated themes that he had outlined in his recent book which predicts the “Depression of 2010”. Harrison has been accused of journalistic sensationalism. Many mainstream economists, however, agree that we are in for a big economic crisis in the near future, given the built-in structural disharmonies of the global economy. Harrison has the ability to put into words what most experts think, but dare not say.

Dr. Rana Roy, Senior Economics Adviser of the British Prime Minister, then gave the first keynote paper defining the theme of the ‘economics of abundance’, and in fact playing the part of “Dr. Paradise”: If we only use economic insights and technological advances well — including a prudent, socially just tax policy — then we as humankind are in for a cornucopia period! The presentation wasn’t quite Georgist, but “New-Labor-Think” as formulated by Anthony Giddins. In Dr. Roy’s neo-Keynesian/Galbraithian analysis, if we only improve our bureaucracy-based poverty management, all shall be well. Yet, as the progressive French writer Jules Romains observed, British ‘social democracy’ really is a misnomer; it should be called ‘social bureaucracy’. Dr. Roy’s analysis was not Georgist, but it offered Georgists hope. If a mainstream economist who advises national governments can envision such a rosy future growing from the soil of today’s economy, how much more easily could a Georgist do so?

Lest all this millennial optimism make us dizzy, Dr. Michael Hudson was called upon next to present the viewpoint of “Dr. Doom”. In Britain, millennial enthusiasm was dampened by the financial debacle surrounding the London Millennium Dome — built with considerable fanfare and public support — and hailed as a cure to economic malaise in the late 1990s. The only downside seems to have been that nobody apparently sat down to figure out who would be able to buy all the new products offered in it. As it turned out, the much heralded millennium business boost had to quietly close its doors. Economic miracles don’t happen out of the blue, they happen if current ills are properly addressed and genuine new opportunities are created. Dr. Hudson was able to paint a more realistic picture. He has recently become an adviser to the Latvian government (and in London, he did his part to shore up its currency). He also now holds a position as economics professor at the Univ. of Missouri. Hudson, as expected, skillfully turned down our expectations from Roy’s economic paradise into something more nearly resembling Dante’s circles of hell — if, as is all too likely, Georgist policies are not applied on a large scale.

Of the many distinguished speakers who followed, Phil Anderson, the Australian Georgist, director of Economic Indicator Services, was outstanding. He spoke on Tuesday morning and made credible economic cycle forecasts from extensive financial data based roughly on the 18 year cycle first explored by Sergei Pervushin, the maverick Russian economist who was sentenced to death in the 1930s, because his research, identifying an 18-year real estate cycle, embarrassed Stalinist ideology. We wish Phil Anderson all the best for his theories and hope he need not succumb to his mentor’s fate.

Dr. Nicolaus Tideman spoke on “LVT and Eminent Domain”, following Anderson, Tuesday morning, July 4th. The ’eminent domain’ issue is timely, as it is being invoked in New York and the New England states at this very moment to force private real estate owners to hand their land over to developers. This process, which seems inimical to the legal concept of ’eminent domain’ (and the very opposite of what Georgists advocate) has nevertheless been adopted by local officials desperate to bring some sort of development to stagnant downtowns.

It is quite instructive to experience how the US Independence Day is (not) observed abroad. One would not expect fireworks and long speeches on the Founding Fathers — but some attention, perhaps, to this pivotal event of world history. This International Union conference was preponderantly attended by our British brethren; a handful of Danish stalwarts, three additional Yankees, namely William Batt, Anne Goeke, and Dr. Cay Hehner, and Dr. Frank Peddle from Canada made up a rather modest ‘international’ section. The 4th of July might have provided the Georgist gathering with some food for thought. There was this small matter of ‘no taxation without representation’. It is a heady thought to imagine that had Henry George lived contemporaneous to Thomas Paine and had the US begun its history with a Georgist public revenue policy, the US may have never left the empire — and we all would live an a happy World Union today under the reign of Queen Elizabeth II.

On Wednesday, July 5th David Wetzel discussed the impressive progress that has been made under his aegis with London public transport and the implementation of congestion charges on sections of the inner city of London. Shouldn’t Manhattan, we were asked, adopt such as system as well? It seems inconceivable, but there are still so-called civilized countries in the world that do not charge any highway tolls. There are even so-called civilized countries in this world that do not charge tuition for colleges or universities. In other words whether you go to university or not depends solely on your intellectual abilities and aptitudes. Undeniably efficient as congestion charges are, we should remember the paramount Georgist goal of reconciling efficiency with justice.

Wednesday evening The School of Economic Science held a reception for all conference attendees, presenting its new quarters. Ian Mason, the headmaster of the school, welcomed the IU guests. Mason gave a moving thank you and farewell speech to the two long-standing London volunteers, Barbara Sobrielo and Jose Mernane, without whom the success and progress of IU conferences in the past decades would have been unthinkable. Anthony Werner, the head of Shepheard-Walwyn Publishers, saw admirably to everyone’s need for refreshment.

On Friday, July 6, the cosmopolitan Spanish Georgist and lawyer Fernando Scornik Gerstein gave an impressive analysis of contemporary China’s way to “Capitalism without private land property”. Michael Hudson co-presented. While Gerstein confined himself to practical observations and the sharing of personal experiences with legal and tax practices in contemporary China, Dr. Hudson gave a theoretical analysis of economic realities under post-Communism. During the discussion period, Dr. Frank Peddle, who recently toured China with Clifford Cobb, concurred that the Georgist heritage of the Sun Yat-Sen period between the two World Wars still is perceived as more of a liability than an asset. Sun Yat-Sen still is persona non grata in the still-totalitarian post-communist mindset. Unlike Taiwan, China has not yet rediscovered what treasures of social reform its own history contains.

Peter Gibb closed the conference, formally picking up where Fred Harrison had left off in his opening address in giving an outlook of what he perceived to be the “Agenda for the 21st Century”. Not implementing it might entail not having a 22nd one. Friday, July 7th was dedicated to the General business meeting of the IU. To recuperate from bureaucratic work, the organizers wisely offered an evening banquet floating on the Thames with music and humorous interludes by several participants, much appreciated by all.

Much also was made of the sweltering dog days that London was suffering this summer, as people endured temperatures above 1000 Fahrenheit. New Yorkers, however, found the weather rather pleasant. Vive la difference! How else are we going to learn about different conditions in different countries? Another reason to support international conferences in the future.