The tradition of honoring those who have made great contributions to our movement with a “Henry George Award” has, happily, been revived in recent years. Current practice has been to offer three awards; one each for an activists, educator and organization. The CGO officers couldn’t make such a neat distinction this year, though — for they sought to honor a woman who, since 1937, has been an onmnpresent activist, unstintingly volunteering her time; has been one of the great georgist educators, and indeed, having kept the Henry George School of Philadelphia running through the tenures of five Directors, has virtually been a one-woman organization! 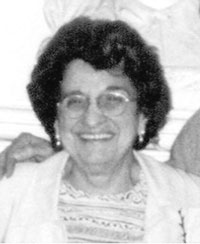 Lu Cipolloni will be embarrassed all over again to appear page one, and will try — as she did at the conference — to divert her rightful praise and attention toward others. Nevertheless, I want to add just a bit to the encomia offered by Messrs. Collins, Curtis, Ford, Sullivan and Biddle. What an utterly delightful person! To meet Lu Cipolloni is to be astounded by her warmth, practical caring concern and gentle, unassuming intellect. Despite having demonstrated a hard-nosed dedication to the work of expanding the georgist movement, Lu welcomes newcomers to something she treats much more like a family. Perhaps our movement hasn’t yet achieved its lofty goals, or grown as fast as we have hoped — but no group with Lu Cipolloni on its side could ever really be called a failure. — Lindy Davies