That’s the question that kept occurring to me as I read Walt Rybeck’s new book. I mean, if a really nice guy like this, with an impressive list of career accomplishments and a quietly powerful, lucid style — if a guy like that can’t get the reading public to wake up to truly obvious facts, well — What’s it gonna take?

As Bob Clancy often said, it’s virtually impossible for a Georgist — someone inside the envelope — to determine whether or how a Georgist presentation 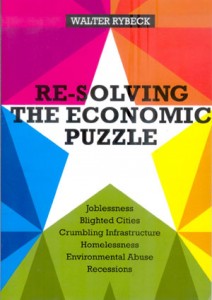 will move the uninitiated. So I can’t really comment on the book’s cover, on which a shining white star promises to shed light on “Joblessness, Blighted Cities, Crumbling Infrastructure, Homelessness, Environmental Abuse and Recessions.” Grandiose claims? I suppose so — yet Rybeck is true to his word; in the book he has persuasive points to make about each item. Although we’ll have to see how it plays in Peoria, I’m planning to send copies of this book to a number of intelligent friends and family members who I have not yet been able to convince on the land question’s extreme importance.

The book is presented as a sort of intellectual memoir, following Rybeck through various chapters of his professional life and describing the way in which each set of experiences cemented, in its own way, the importance of Georgist thought to his life and work. He doesn’t shy away from the Big Issues, affirming in the first three chapters that the land question is as fundamental a moral issue as the question of human slavery — and, indeed, can be seen as today’s version of that very slavery question, which culture and law have never truly resolved.

These first chapters were not, to my mind, the strongest part of the book — but it may be that I found them a bit trudgy because of sheer familiarity. Fortunately, Rybeck quickly shifts from the ponderous to the personal. He recalls as a child how “when my father’s old friends gathered, they would frequently voice a lament: If only their parents had held on to the Manhattan lots they once owned, they sighed, their families would now be rolling in wealth.” Nothing seemed unusual or wrong about this back then; it was just the way people talked. Over the years the shape of the Monkey Wrench in the economic works became clearer to Rybeck. His family’s business ventures prospered, locating on the outskirts of Wheeling, West Virgina as the center-city crumbled. The serendipitous potential of social activism was impressed on cub reporter Rybeck in Fairmont, WV. There, he tried to mobilize townspeople to renovate a charming old castle. The campaign failed — but, the process brought together a group that would establish a symphony orchestra, which, because of the shortage of qualified musicians, would become a local bastion of racial cooperation!

His next gig, as a Latin American correspondent, brought home the reality of the land problem. In Ecuador and Colombia he saw the characteristic postcolonial pattern: a few hugely wealthy, sequestered latifundistas, and the wretched, landless masses. But for many, ideology masked the true shape of the problem:

Most of my young Ecuadorian friends, in their twenties and thirties, called themselves communists. Why? A typical reply: “We’ve tried capitalism and it doesn’t work.” It did not look like capitalism, certainly not the US version…. A thin veneer of capitalism was struggling to exist in the face of an oppressive system of land monopoly. My friends there seemed unable to see it that way.

When he returned, working as a newspaper reporter in Columbus and Dayton, Ohio, Rybeck had become fully sensitized to the workings of how “Land Speculation Trumps Enterprise.” The role of race in the process became clear when, as newlyweds looking for their first house, the Rybecks watched the process of redlining:

We got an education when we went house-hunting. A realtor looked over our list of ads that seemed interesting and affordable to us. He immediately crossed off several because “those will go black in a couple years.”… Within these redlined areas, mortgages and loans for home improvements, if available at all, could only be obtained on extremely unfavorable terms.

Rybeck moved to Washinton, DC to become Bureau Chief for Cox Newspapers through the turbulent 1960s. There he encountered some familiar Georgist frustration:

A clue that land was not even on the back burner came during a press conference. Walter Heller, chief White House economist, was describing the dangers of inflation…. I asked if he was looking at how land price escalation was fueling the inflation of housing, food and manufactured items.

“I don’t follow you,” Heller said with a puzzled look.

Dick Stroud of the Christian Science Monitor spoke up for me. “You know, land prices are really soaring and foreigners are buying lots of farmland, bidding up acreage prices. Is there something that should be done about this?”

Reporters rolled their eyes when Heller responded, “If it’s such a good investment, I guess the federal government should buy land.”

There are lots more good stories; pick up a copy and read them for yourself. One interesting observation that Rybeck makes, as the Kennedy/Johnson years slid into the Nixon/Ford era, is that Republican administrations were markedly less sympathetic to the notion of land rent as public revenue than Democrat ones. This may have something to do with the presentation of LVT as a “progressive” (as opposed to a tax-cutting) sort of reform. But it did seem to be a clear pattern. For example, work was underway in the late 1970s to make land “like football” by establishing a national Land Price Index.

[Rep. Henry] Reuss in January 1979 released news of our plans to create an LPI. Secretaries of HUD, Labor, Treasury, Interior and Commerce, as well as heads of the Federal Reserve Board and the Budget Bureau, applauded. So did Alfred E. Kahn, the White House inflation fighter, who was quoted in the Wall Street Journal as saying he saw “some value in old Henry’s thesis.”

Ronald Reagan’s administration, however, ordered the Bureau of Labor Statistics to halt work on the LIP, as well as “terminating the Census of Governments’ quintennial reports on property assessments.” thus effectively stopping any federal-level recording of the economic role of land.

The final sections of Rybeck’s book offer concise statements of economic facts and examples — useful references, familiar to most GJ readers. In them, it seems to me that Rybeck is a bit overly sanguine about the sustainable benefits of municipal two-rate tax shifts — and, he downplays the practical political challenges faced by real economic reform. But, if Rybeck’s intended audience is — as it had better be — newcomers, not old hands, then he is wise to wax optimistic. The more people we have working toward our cause, after all, the more optimism we’ll be able to muster.

Nevertheless, Rybeck doesn’t try to minimize the daunting challenges we face. In a chapter on “Competing Philosophies” he offers these wise words:

From a salesmanship perspective… Marxism has a clear advantage…. Marxism attracted single-minded zealots willing to conspire through secret cells, follow orders from above, adhere to a strict party line, and overlook evil behavior by their leaders in the belief that the ends justified the means. Georgism attracted individualists who pursued their own varied strategies, eschewed party discipline, and put their faith in education, the free market of ideas and democratic processes.