Shirley-Anne Hardy’s new book is a wonderful contribution to Georgist literature, which can interest people not usually inclined to study economics. She has woven the land question into an entire tapestry of how we deal with the earth environmentally and spiritually, as well as economically — and shows how they all go together. She approaches the whole subject with a rare warmth and spirit. Her work can appeal to the religiously-minded as well those who look at the Bible in a skeptical light. This book would appeal to all those who care about Gaia and her creatures. 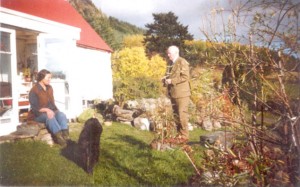 “I am told a photograph is obligatory — so this one is slipped in here! A favourite taken in 1986. Tom and I, and our beloved Juniper did not know we were being snapped in another corner of the garden!”

Henry George was a great admirer of Moses because of his bringing the law of Jubilee, where the land went back to the original families every 50 years. Hardy refers to the Law of Jubilee as “the 11th Commandment.” Moses, she writes,  clearly saw that unless the land question was dealt with by a just and specific law, he might as well have left the children of Israel enslaved in Egypt. Also she points out that the tithe was the payment of each landlord taken for communal purposes: a land rent! Not corrupted, as it is today, as poor people get persuaded to give the church what little they have. Also in the Mosaic law, there were provisions for maintaining the fertility of the earth (Moses was the first environmentalist). She tells how the Israelites opted out of Mosaic Jubilee, “with every man sitting under his own vine and fig tree, with none to make him afraid.” They wanted a king, (which the prophet Samuel predicted would lead to them becoming serfs), and it did indeed lead to doom.

Shirley-Anne shows how the Law that Christ said that he came to fulfill was indeed Moses’s Jubilee law. He sought to help the poor in this world, not the next. Henry George spoke of this in his speech “Thy Kingdom Come,” delivered in Glasgow, Scotland in 1889. “Rome,” George said, “prided itself on being tolerant of all religions. What was persecuted was a great movement for social reform — the Gospel of Justice.” Shirley-Anne notes that the Church changed the word “justice,” which calls forth action, to “righteousness.”  Thus the Church corrupted the teachings of Jesus.

Hardy suggests that Islam rose in protest against the Christian Church’s support of landlordism. That’s why they hated “us” then — a hostility that carries through to the present day. The Taliban, horrible as they are, nevertheless do kick landlords out give peasants back their land, which helps to explain their popularity. And who are “our” allies in the fight against the Taliban? You guessed it: the landlords.

Early in the book she tells the story of “Do you see the Cat?” That metaphor is woven throughout the book. The cat “who stole the cream and swallowed up the whole landscape” appears unassumingly on the book’s cover.

I  like her terminology, such as our “monopoly capitalistic system.” She writes how “digging in the earth is like giving birth.” And she blames “multi-sensory deprivation” of  living in cities away from the beautiful sights, sounds, smells, etc. of nature for many of our social plagues, such as obesity, drugs, alcoholism or sexual promiscuity.

Here’s a memorable paragraph from her section on debt:

Meanwhile the crowning achievement is to get the people to believe that they themselves are to blame; that they are the ones responsible for their debt ridden state, for not having worked hard enough, or  for having mismanaged their lives… not being able to get a decent job etc. (the final trick) since they have made such a mess of things as to get into debt, and must now live a life of borrowing, that it is up to them, via their tax monies, to bail out the banks upon which those borrowings depend!

I have one minor bone to pick. She writes sympathetically about the vegan diet. I am against factory farming and treating animals cruelly; I practice and support organic farming. But to forego all animal products is like objecting to air pollution by refusing to breathe. All native peoples, unless impoverished, have a source of animal protein. I know people who after becoming vegans contracted lupus, irreparable nerve damage from a lack of B12 etc. She might be surprised to learn that the single most environmentally damaging food product is the one type of long potato, the Russet Burbank, that is used for french fries — because of its mono-agriculture and huge need for pesticides.

But that said: I love this book! It is inspiring and useful on many levels. It pays careful attention to the demands of scholarship, yet offers enchanting poetry, quotes and charming stories. It leaves no accepted “authority” — such as technology, globalization or central government — unchallenged. It is an outgrowth of a lifetime of writing and work for environmental, economic and social reform. It’s a worthwhile gift to anyone who has a feeling for the land, our mother Gaia, for justice, and clear thinking.