This essay is part of the supplemental readings for the HGI’s course in Economic Science.

Definitions were extremely important to Henry George. A great deal of his writing was devoted to making sure his readers had clear, consistent terms to use. His paramount concern, of course, was to functionally distinguish wealth (a product of human labor) from land (natural opportunities independent of human action). If the reader has been with us all along, that distinction will be familiar and obvious. As a strong believer in neat definitional boundaries, George gave the study of political economy itself the same treatment, defining it as “the science which treats of the nature of wealth and the natural laws governing its production and distribution.” This is the standard definition that has been used over the years in Georgist curriculum — for example in a familiar bookmark, listing basic economic definitions, used for decades by students of the Henry George School. 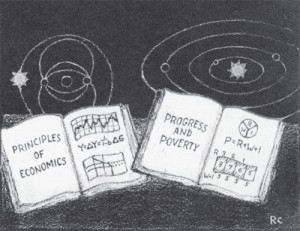 Yet, as you may have noticed, the Henry George Institute no longer uses that definition. We have defined political economy more inclusively (and, alas, in a few more words), as “the science which deals with the nature of economic value and the natural laws governing the production and distribution of valuable goods and services.”

Does this “new” definition seem nit-picky? Untidy? Perhaps. However, it encompasses an aspect of production that, while it may have seemed mere marginalia in Henry George’s day, has become vital in the 21st century: the concept of services. And, along the way, it leads us to a more comprehensive, elucidative definition of political economy.

If political economy is thought to encompass only the production and distribution of physical wealth, then services — in which human desires are satisfied directly, without the exchange of a physical product — cannot be part of production. Henry George seems to take this position, in a footnote in Progress and Poverty (Bk. I, Chp. 3), saying that the payment for a service, such as that of a shoeshine, comes not from capital, but from wealth one devotes to one’s own satisfaction. However, the payment for the shoeshine is not charity; it is given in exchange for a desirable thing. Since George defines exchange as part of production, the service would fall in that category.

In The Science of Political Economy, Henry George explains how and why the fundamental purpose of economic behavior is not the production of physical goods, but rather the satisfaction of human desires. He applies the term “service” to the process of human labor aimed toward the satisfaction of desire, and explains that wealth is service embodied in material form. Wealth can be transported or exchanged, until it serves its ultimate purpose of being consumed — of satisfying human desire. George reminds us that “wealth itself is in fact only a halting-place or storehouse on the way between prompting desire and final satisfaction…. And there are exertions aiming at the satisfaction of desire which do not pass through the form of wealth at all.” (Book II, Chp. 18) The accepted term for such exertions, for George as well as for modern writers, is “services.”

Why is this important? It isn’t bad, to begin with, to remove a logical flaw, especially when it does no violence to George’s basic thesis. More important, though, it steers our analysis clear of a 21st-century danger zone. If political economy is the science of the production and distribution of wealth, and wealth is inescapably material, that suggests that economic growth is inevitably the production and distribution of more material — with the attendant using-up and fouling-up of increasingly scarce natural resources. This rings many an alarm bell today. We’re warned that economic growth cannot continue on a finite planet — and if it does, sooner or later we will face a catastrophic, Malthusian collapse.

While it is well, in any case, to address the environmental costs of material growth and pollution, we don’t need to fundamentally redesign the science of political economy to do so. That is because the true goal of economic activity, as Henry George reminds us, is not the creation of more material stuff; it is the satisfaction of human desires. Modern production creates a whole lot of stuff that nobody wants. These days, one desire that people are willing to pay to have satisfied is for clean and sustainable production. In other words, people are willing to pay to get what they want with less net resource-depletion and pollution. More and more, people are willing to pay for production that ends up producing not more stuff, but less stuff — remembering that pollution, after all, is also stuff that gets paid for, somewhere, sometime, by somebody: it isn’t free.

This way of looking at things gives services a new prominence in political economy. To see how and why, we should remember that labor (such as that of shoeshine boys, or lawyers) isn’t the only economic factor that can directly satisfy desires. Capital can, too; examples include the satisfactions provided by elevators, automatic car-washing machines or public rest rooms. And land offers a category of direct satisfactions that have recently generated great interest: “ecosystem services.” The capacity of the air and the sea, for example, to absorb pollutants and render them harmless to us has, for a long time, been taken as a free service — but in recent years its value has grown a great deal.

Now at this point, some might ask: If your Institute can’t even accept Henry George’s definition of the science itself, why still use his book? Doesn’t this reveal George’s analysis to be hopelessly obsolete?

Not for a moment! One minor logical inconsistency cannot invalidate the profound insights that Henry George articulates with such clarity and force. Indeed, by insisting on the distinct role of land as a factor of production, George’s ideas lay indispensable groundwork for the field that has since come to be known as “ecological economics.”

In The Science of Political Economy, Henry George sought to lay out the basic principles and natural laws of the science itself — before and beneath the complications and adulterations that have overlaid it, and which form the bulk of what passes, today, for economic analysis. For example, today, great ink is spilled and vast numbers crunched over the boom-bust cycle — economic volatility, the inflation/unemployment tradeoff, etc. — yet Henry George gave us not a single sentence on the topic in The Science of Political Economy! At first glance that might seem quaint, archaic, a postcard from a simpler era. But, of course, George himself was deeply concerned with the boom/bust cycle. He ignored it in this book because he believed it had nothing to do with the natural laws of production and distribution. It is an entirely curable social affliction, if only those laws are clearly observed and applied. For one more example: modern students might think to fault George because his book appears to offer no discussion of “externalities.” But, of course, that isn’t so. Though he didn’t use the term, Henry George was a pioneer in the analysis of externalities. He described in detail the external effects of land speculation, private collection of community-created land rent, public confiscation of producers’ legitimately-earned wages and interest — as well as lesser influences such as protective tariffs, labor unions and public debts. Indeed, without settling (as George sought to) the moral question of what legitimately belongs to the community, and to individuals — how can one even say what “externalities” are external to?

Henry George himself, after all, insists that readers not take his word for anything, but follow truth where it may lead. Yet we believe, with George, that there are natural laws of political economy — and until another writer comes along who articulates those natural laws with greater eloquence and clarity, we’ll keep offering Henry George’s works to new students.