During my recent visit to New York, I treated myself to a visit to the Museum of Modern Art, and a fascinating exhibit exploring what could be done with troubled suburban spaces. The exhibit will be there at the MoMA until July 30th, and Geoists of every stripe would do well to check it out.

We have been accustomed in the US to thinking of “urban blight” and “suburban sprawl” — imagining the latter as a wasteful, privileged way of living that depends on automobiles and subsidies of all kinds — boorish and unsustainable, yes, but pleasurable enough for those who can afford it. Yet, though suburban life might have had its spiritual or cultural pitfalls, right up until 2008 it was a good deal economically. Now, not so much: there have been over 9 million home foreclosures, and an additional nearly 11 million underwater mortgages. Vacant suburban houses are being used by gangs… college graduates are moving back in with their parents… people are renting out their spare rooms, basements, garages… there is a growing syndrome of suburban blight.

This exhibit looked at five representative suburban communities, each in a distinct region. They are not the best, or the worst, but all have high foreclosure rates and are afflicted by the familiar list of Great Recession problems. Also, each of them lies along the route of a proposed expansion of high-speed rail service. For each, a team of architects and planners envisioned a revitalizing mix of green technology, mixed use and innovative financing that could transform these troubled communities into healthy and exciting places to live and work.

The exhibit is based on “The Buell Hyopthesis,” which was summarized as “Change the dream and you change the city.” That seemed vague. I wanted to know more, but, curiously, no printed companion to the exhibit was available for purchase. It seemed odd that such a multifarious multi-media installation’s founding document would be an “Uncorrected Draft for Limited Distribution.” The draft is available online, however, from the Temple Hoyne Buell Center for the Study of American Architecture at Columbia University — and offers a curiously compelling read. The book has two distinct parts. The beginning/end takes the form of a screenplay for a documentary film, in which Socrates and his foil Glaucon, stuck in I-95 traffic on their way to a symposium on The American Dream, explore the meaning of that dream, in the particular context of housing. Their musings are interrupted by the middle section, a long scrapbook of newspaper clippings and other primary source bits, outlining the long and tragic history of public housing in the United States.

Socrates muses on the tensions and ironies between “public” and “private” in our cultural vision of home. He notes that as they sit in traffic, their private conversation is taking place on the public highway — while your “private” home (which you enter, not through the front door, but via the public highway, through the garage), is owned in bits and pieces of securitized debt by who-knows-who. This fragmentation of the American Dream of home ownership casts doubt on one of society’s most basic functions: its ability to provide adequate housing for its citizens.

Financial speculation in real estate, and especially in housing, not only exploits this basic fact, it requires it. That is why the American Dream has been such an effective marketing device. It reproduces the illusion that society takes care of its members by affording them the opportunity to take care of themselves, primarily by owning a home. With home comes a sense of independence. 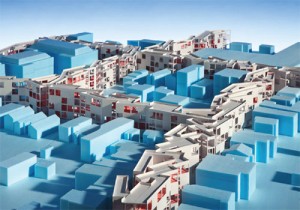 The Buell Hypothesis plays with these ironies: that private homeowners are subsidized by public infrastructure and mortgage-interest deductions — or that the ratio of public to private investment can actually be greater in suburban communities than in public housing developments. The American dream of independence, of a man’s home being his castle, has pretty much been smashed by current real estate-driven crash — and while some sort of culmination does seem to have been reached, it would be a mistake to think there was anything essentially new about this process. Mortgage-backed securities were used in the 1920s, too, and land-based bubbles have been bursting with surprising regularity for centuries.

My first thought upon seeing the MOMA exhibits was “new urbanism” — but it didn’t seem quite like that, and the Buell text made the difference clear. It characterized the new urbanism movement as using innovative design and planning to hearken back to an imagined past in which work/housing/community made sense — but without critiquing the lines between public and private in the sphere of housing. That jibes with the sense that new-urbanist developments tend to create high-priced enclaves (and indeed, have sometimes approved of using two-rate tax-shifting toward that end). The Buell folks are going well beyond that, seeking to reimagine the entire division between public and private housing. The five suburban community models shown in the exhibit each, in different ways, seek to provide public housing in ways that remove the stigma associated with it, as part of mixed-use, pedestrian-friendly, environmentally-sustainable communities — arising from areas that are currently quite distressed. It’s a tall order.

The core of the Buell Hypothesis draft, over 200 pages, is an impressionistic sketch, using newspaper clippings, photos, Congressional reports and rap lyrics, of the history of public housing in the United States from 1929 through the George W. Bush years. It is a story of stark failure, and it clearly shows how racialized the issue of housing has been throughout the 20th century. “Housing projects” may not always have been strategies to corral the black and brown urban poor, but demographics and social forces ensured that was what they would almost always be. The process culminated, symbolically, in the razing of Chicago’s Robert Taylor Homes in 1996. Identification of urban blight with African-American and Latino poverty was a major force behind “white flight” and the tremendous growth of suburbia in the 60s and 70s. After 2000, although a good many people still lived in public housing, or wanted to, virtually no new public housing was built; public housing support started to take the form of vouchers and mortgage assistance for minority home-buyers. Meanwhile, the “housing boom,” coupled with the tax incentives favoring home ownership, vastly decreased the supply of rental housing, and increased its price.

Given the great (and compelling) emphasis The Buell Hypothesis placed on public housing, it is curious that the five suburban communities chosen for re-imagining in the exhibit had very little of it. The communitites of The Oranges, New Jersey, Temple Terrace, Florida, Cicero, Illinois, Rialto, California and Keizer, Oregon are all quintessentially suburban communities built on individual home mortgages. More public housing may be needed in them now, of course, as so many people struggle to keep their homes. Yet those who do manage to keep making payments on their mortgages and keep building equity in their homes (and those folks are still, after all, in the majority), might look askance at what these egghead reformers are doing, in the name of the public good, to their property values.

In any case, the exhibits themselves are jaw-dropping in their imaginative scope; touring them offers an exhilarating sense of what’s possible. And the element of high-speed rail is key in each one. It need not be said that the automobile is the tool of Satan. The most striking of the plans was the one for Orange, New Jersey, which calls for all the streets within a half-mile radius of the commuter rail station to be replaced by meandering, modular mixed-use buildings. The three-story complexes would have continuous footpaths on all the roofs, and would house a variety of housing, office and community functions. Innovative financial arrangements would include “portable mortgages” by which households or small businesses could become stakeholders in cooperative management. The planners note that “unlike earlier urban renewal models, which proposed the wholesale reworking of a site, here new and old structures coexist: streets of traditional single-family houses are juxtaposed with the new ribbon development.” One wonders how current homeowners would feel about the new developments, as close to their front doors as the sidewalk once was.

The community envisioned for Keizer, Oregon is breathtaking. Called “Nature City,” it envisions a nearly self-sufficient community in energy and water use, with pass-through 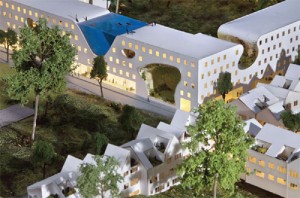 areas for wildlife and even a giant compost dome that produces fertilizer for local agriculture and even heats the community swimming pools built on top of it. The constant rushing of water in its high-rise “Tower of Houses” might not be to everyone’s taste — but the combination of

cutting-edge materials technology with a vision for a sustainable, walkable community offers an exhilarating glimpse of a sane future.

Georgists have a tendency to look at presentations of this sort, scratch their cranky heads and say something like, “Gol-durnit, these people would a-had a pretty good idea, if only they’d a-read Progress and Poverty!” This habit can sometimes fall short of actually being endearing or appropriate. In the case of The Buell Hypothesis, though, I’d argue that a Georgist perspective would be very helpful. It may well be that the fundamental tension, or distinction, between what’s rightfully public and what’s rightfully private isn’t as nuanced, or as tortured, as Socrates and Glaucon make out in their musings. The spread of urban blight and the chronic need for public housing had everything to do with land speculation, a process which was afflicting society long before the George W. Bush years. The Buell teams are, unfortunately, rather weak on how to pay for these wonderfully life-affirming plans for new communities; they have not laid to rest the bitter 20th-century truism that “the market cannot provide affordable housing.” Well, why can’t it? Progress and Poverty provides an answer to that question — an answer that would make the desperately-needed realization these hopeful visions much, much easier.