In 1994, in the prosperous city of Stuttgart, Germany, a rail project termed Stuttgart 21 (S21) was announced to replace the existing 16-track overground terminus station by an 8-track underground through station, in what would be Europe’s largest construction project. 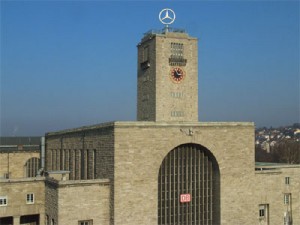 The idea was to liberate prime sites for development, as had become a trend in Europe involving stations such as Kings Cross in London. Both wings of the station were to be torn down, despite its listed building status, leaving only a torso, in a process architects term “facadism.” Even more controversially, nearly 300 stately old trees in the adjoining park would be felled for the benefit of the land speculators, the contract partners being German Rail (formally a private company but owned 100% by the Federal government), the City of Stuttgart, and the State of Baden-Wuerttemberg, whose capital is Stuttgart. In 1999 the project was put on hold by the then CEO of German Rail, and most citizens breathed a sigh of relief. To rescue S21, the City and the State made financial committments.

The said CEO is significantly the only one of the last four not to have been a manager previously at the automobile giant Mercedes-Benz, the Stuttgart-based firm whose world-famous star logo tops the station tower. That is significant as German “Rail” is now also heavily involved in trucking, and with Mercedes-Benz the world’s second largest truck producer, some transportation analysts reckon that S21 has been designed to fail, swallowing up money needed for track maintenance, so that a switch to road freight will ensue: a classic hidden agenda.

In 2007 the project was resurrected, the cost limit being set at a totally unrealistic 4.5 billion Euros (a year later, the Federal Accounts Committee would reckon at least 5.3 bn). The resurrection led to the first organised political resistance, mainly by the influential Green Party, and an unsuccessful attempt to get a referendum in the city. There followed the foundation of the “Park Defenders,” which now has over 30,000 people committed online to different levels of protest. Other groups also formed with other priorities, e.g. concern about contamination of the city’s mineral water (Stuttgart is second only to Budapest in its volume of this water). An immense amount of voluntary labor has gone into an extremely creative and professionally organised resistance movement involving people of all ages and social classes, not least the increasingly troubled middle class. To counter this unexpected revolt in a traditionally conservative region, the contract partners have abused large sums of taxpayers’ money for propaganda, with the local mass media on their side of course, and in November successfully rigged a state-wide referendum to give S21 a pseudo-democratic legitimation. 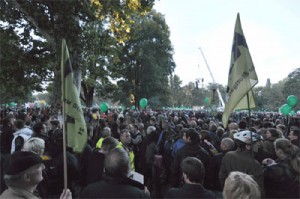 Construction began in February 2010 with the symbolic removal of a buffer, attended by the great and the good. The north wing was demolished amid mass protests in September 2010.

The escalated dramatically on September 30, 2010, when in a police action the Nazis would have been proud of, a water cannon was used at maximum pressure to clear peaceful protesters, mainly teenagers and pensioners, trying to stop the felling of some 30 trees. Four protesters received serious eye injuries, including a pensioner who was blinded in one eye. Pepper spray was also used in the completely unprovoked action, and nine days later at least 63,000 protesters (the police estimate) turned out to vent their feelings. Yet no government politician or senior police officer has ever been arraigned.

In March 2011 a state election in Baden-Wuerttemberg forced the Conservatives into opposition for the first time in 58 years. The S21 project was a major factor in their downfall. The Green Party now has the first Minister-President of any region in Europe and is in a coalition with the Social Democrats, whose leadership is for S21 but whose grassroots members are by and large skeptical.

What does the future hold? The “liberated” land has so far only been colonised by the ugly cube which houses the city library. The South Wing of the station is due for demolition in January, and scores of stately old trees in the park will be “transplanted”. Court cases are pending, notably involving the train drivers’ union, and a group which claims with some justification that state funds may not be used to finance federal projects.

At the financial level, the inevitable reaching of the €4.5 bn. limit will lead to pressure by German Rail, and the powerful firms standing to benefit from the project, on the City and the State to increase their contributions. Yet the impending Euro crisis and the parlous predicament of Baden-Wuerttemberg’s state bank, plus the unwillingness of the Greens to contribute one more cent than is in the contract, could lead to S21 becoming Europe’s biggest white elephant.