(This article appears in the readings for the Henry George Institute’s course in Understanding Economics.)

The general principle that land value is a good source of public revenue is surprisingly uncontroversial among economists. Many recognize that the rent of land is not a payment for any sort of production; land is not produced. Land rent (and/or rent capitalized into a selling price) simply induces one person to give over exclusive access to a piece of land to another. It does not affect the supply of land. This means that land rent is an economic surplus, which can be heavily taxed, or even fully taken by the community, without putting any burden on production.

It is also, however, widely reported in standard economics texts that, in modern economies, rent forms only a very small portion of overall income. How, it is asked, could Henry George’s “Single Tax” be a viable proposal when the national accounts tell us that rent amounts to less than two per cent of GDP — while taxation takes over 25% of it!

The main source of these extremely low figures for aggregate rent is, in the United States, the National Income and Product Accounts (NIPA). This is the basic source for tallying up the Gross Domestic Product, and its raw data comes from that given to the Internal Revenue Service from income tax filers. The rent figure in the NIPA accounts is called “Rental Income of Persons” and includes rent explicitly paid for rented real estate, as well as the “imputed rent” that homeowners pay to themselves. It does not, however, include rent that is paid in local property taxes, is capitalized into selling prices of land (this income is recorded as “capital gains”) or is counted in the value of corporate assets. These low aggregate rent figures generally match those published by the Federal Reserve Board and the National Bureau of Economic Research. Hence, standard sources can cite them with confidence. Nevertheless, this 1-2% figure is clearly inadequate as a measure of aggregate rent (See Michael Hudson, “Where Did All the Land Go?”)

As often happens in economic-policy discussions, the real source of this discrepancy is a conflict of definitions. Advocates of collecting land rent for public revenue are accustomed to thinking of “rent” as the return to land as a distinct factor of production. However, mainstream economists — such as those who compile national income data — tend not to recognize this definition. Mainstream, or “Neoclassical” economics has consistently denied the existence of land as a separate factor of production; the income it generates isn’t seen as being fundamentally different from any other income. Economists haven’t bothered to quantify a total whose existence they haven’t recognized. 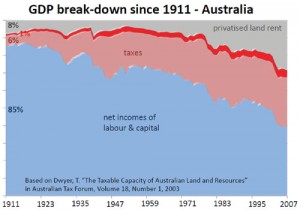 Because Australia has a long tradition of recording land assessments separately from improvements — and in many places collecting land value taxes — data on aggregate rent is easier to uncover in Australia than in other nations. A 2003 study by Terry Dwyer that surveyed Australian land value records from 1911 to 1999 showed privately collected land rent to be as much as 26% of Australian GDP — more than the 24% of GDP currently collected in taxes, of which only a very small portion is publicly collected land rent.

The “Henry George Theorem” has become widely accepted in mainstream economics (ironically, it is better known in some circles than the economist it is named after). It states that the value of land in a city is a function of the public investment in that city’s infrastructure. Under certain ideal conditions, aggregate spending by government will be equal to aggregate land rent; thus, 100% of a city’s revenue needs could be provided by a levy on its land rent.

Widely adopted later in mathematical models by economists such a William Vickrey, David Robinson and Richard Arnott, this idea was first published by Georgist advocate Benjamin F.
Tucker in his 1958 book The Self-Supporting City. In a recent reprint of this book by the Robert Schalkenbach Foundation, Bill Batt provides an afterword comparing Tucker’s analysis with modern presentations of the Henry George Theorem.

At first glance, the Henry George Theorem would seem to suggest that while land rent would most likely be sufficient for local or municipal revenue, it would not be enough to cover the revenue needs of higher levels of government, such as the cost of Interstate highways, national defense, or welfare-state protections. However, it should be pointed out that the Henry George Theorem applies only to location values within cities, under existing economic conditions (including the existing state and federal tax burdens in those cities). Also, there are many other forms of natural opportunity, whose rents could be part of the tax base.

The most comprehensive study of the sufficiency of rent as a revenue base is “The Hidden Taxable Capacity of Land: Enough and to Spare,” by Mason Gaffney. This long article surveys the many ways in which land is glossed over, hidden, misnamed, underreported, neglected, disregarded and just plain ignored in many areas of conventional economic analysis. Gaffney starts from the unconventional, but highly sensible, position that land is a distinct factor of production. Noting the general agreement among economists about land’s suitability as a revenue source, Gaffney sets out to discover what he can about its extent. He finds that land per se — bounded parcels of the earth’s surface — is worth far more than conventional sources say it is, particularly in urban areas. However, Gaffney’s tactic of looking for land rent wherever it might be found (despite efforts to obscure it) bring to light many other sources of socially-beneficial revenue that can come from natural opportunities.

Variant kinds of land resources, hitherto neglected or not classed, or only recently classed with land, show great revenue potential. Some examples are the radio spectrum; telecom relay sites; slots in the geosynchronous orbit; fishing quotas; quotas of all sorts on production and marketing; pollution permits; licenses to withdraw water; power drops; parking spaces; highway access; mooring spaces; etc. Many in the Green Movement see the double efficacy of Pigovian taxes to curtail overuse and pollution of common airs and waters, while also raising revenue….

If we look at Henry George’s remedy in the light of conventional tax policy, we see that it has two parts. The first part, of course, is to collect land rent for public revenue. But the effects of the second part are often not considered. To the extent that communities got public revenue from land rent, they would not need to take that revenue from taxes on labor, commerce, buildings — or indeed any form of production. Lowering taxes on production would tend to increase the demand for land — and thus, to increase land rents.

This principle is easiest to see if we look at shifting taxes off of buildings and onto land. Taxes levied against a building are part of the annual cost of that building. That is money that cannot be part of the finance cost of the building; this means, in effect, that the builder can’t afford to build as big a building as she could were there no tax. Smaller buildings means less rentable space, less income, and therefore lower demand for land. If the tax is shifted from the building to the land, a given value/quality of building is now less expensive than before. This means demand for land increases. Another implication of this is that if taxes on buildings are decreased, the tax base is not lost; it is shifted to land value, where it can be efficiently and economically collected. (Also, shifting the tax to land values would increase the cost of holding land for speculation. This would stimulate more construction, further increasing economic activity and demand for land in that area.) 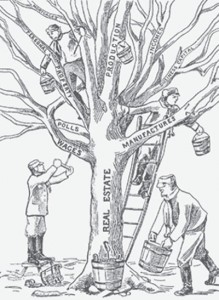 This principle applies (in reverse) to other forms of taxation as well. Two well-known examples are wage taxes, and sales taxes. A municipal income tax decreases the income that workers have left to pay rents, thus decreasing the demand for land in those cities. The Federal income tax, of course, also lowers demand for goods and services, imposing a deadweight loss on the economy. Sales taxes are well-known for depressing local economic activity — so much so that some cities offer annual “sales tax holiday weeks,” during which business booms in local stores. Were these tax burdens reduced or eliminated, demand for land, and land rents, would correspondingly increase.

There are many good theoretical reasons why land rent — properly assessed and collected by the community — would comfortably cover all our public revenue needs. Many Georgists hold that there would be more than enough, and that a per-capita dividend could also be provided. Nevertheless, the question of “How much rent is there?” cannot yet be quantitatively answered. The data needed to determine aggregate national rent simply has not been collected (Dwyer’s data from Australia is the best we have). The Henry George Theorem at least supplies a firm theoretical model suggesting that land rents are sufficient for local revenue needs. However, it is important to realize that our current system of taxation depresses land rents. Were taxes on labor and capital to be replaced by public collection of rent, the level of aggregate rent (our prospective tax base) would be far higher than it is now.

It’s also worth pointing out that in a highly productive, full-employment economy, such as we can envision with Henry George’s remedy in effect, government would need less revenue than now. There would be far less demand for government to mop up a dysfunctional economy’s messes.