by Dave and Heather Wetzel

A number of organisations and many individuals are involved in promoting an annual Land Value Tax (LVT) in the United Kingdom, and it seems our efforts are having some effect on economic and political thinking. Some call themselves as ‘Georgist’; others ‘Marxist’ and others prefer to have no label — but they all want to fight for economic and social justice in the UK, in Europe and in the world and have an annual land value tax as one of the solutions to the numerous economic and social problems that exist.

A major step forward for LVT advocates is the growing number of non-Georgists referring to LVT, suggesting further studies, conducting research into its benefits and actually proposing LVT as a policy. Having these “non-land taxers” raise the issue is a hopeful sign that LVT is being given a fairer hearing and is not now just seen as something easily dismissed because only a few activists advocate it. Overcoming the prejudice of a few influential people and getting policy makers and politicians to think for themselves really gives hope for a fundamental change in how economics is considered in the UK. Even if the penny has begun to drop among a few well-placed politicians, academics, journalists and economists, they mostly only see it as a minor tax reform and do not yet realize the full potential impact of LVT on the present dysfunctional, inefficient, unsustainable and unfair system.

LVT-supporting organisations in the UK differ in political objectives, but all agree on the one fundamental change needed to make our economy fairer, more productive and sustainable. It is the collective activities, over many years, of these people and organizations not only working to their own agendas but also often working together that are responsible for the change in attitudes.

We describe campaigners for LVT as being like a group standing round a snooker table each with one colored ball in our hands and the table full of red balls. Each one of us throws our ball and all the balls ricochet until a few are successfully pocketed. No one person is usually responsible for the success and indeed in most cases the success would not have been achieved without the participation of all. So whether meeting influential people, lobbying governments and officials, writing articles, organising meetings and conferences, using the Internet, speaking at public meetings, sending a letter to the editor, teaching economics, visiting schools and colleges, handing out leaflets, running information stalls, moving resolutions in political parties and other organisations, writing books, pamphlets or making a film — all of our activities to achieve the recognition and adoption of LVT are equally important. However, to be taken seriously, it is necessary to be serious and responsible so as to avoid any chance that opponents can write us off as “cranks.”

Two UK political parties, the Green Party and the Co-operative Party, have both adopted LVT in their manifesto policies. Persistence of land value tax supporters within these parties and those lobbying from outside them have not only got the policy adopted but are working to ensure that it is seen as a key policy for economic and social change and that party members are confident in advocating LVT in their campaigning. The Greens in the Scottish Parliament and on The London Assembly frequently raise the LVT solution.

The Labour Government defeated in 2010 showed no interest in LVT but their Treasury Ministers did meet with the Labour Land campaign and several Labour MPs personally support LVT including two MPs who unsuccessfully stood for the leadership (one on the left and one on the right of the Party) and the Labour Representation Committee, a left-wing pressure group, has been supporting LVT since 2007. The current Labour Shadow Housing Minister is now a supporter of LVT and has requested a paper on empty homes and invited The Labour Land Campaign to brief him on LVT in the New Year.

Labour-controlled Glasgow City Council commissioned a report on local revenue recommending LVT. Unfortunately, the City Council has no powers to change their sources of revenue without a change of Government policy.

The Association for Land Taxation and Economic Reform (ALTER), The Labour Land Campaign and The Professional Land Reform Group have organised public meetings at Lib Dem and Labour Party Conferences.

The Rail Maritime Transport trade union (RMT) is a major socialist transport workers union and following meetings with the Labour Land Campaign have not only adopted LVT as one of its policies but also successfully moved a resolution supporting LVT at the 2011 Trades Union Congress — the UK’s forum for joint action by trade unions. With the cuts to public sector jobs and public services in the UK, there has been a lot of trade union activity on the need for policies that will encourage worthwhile and sustainable economic growth in the UK. Another trade union that includes LVT in its work is the Public and Commercial Services Union, the union for civil servants who published an alternative vision for the Land Registry, a government agency that has to look to raising revenue and become self-financing.

One chapter supporting LVT is written by a member of the Labour Land Campaign. 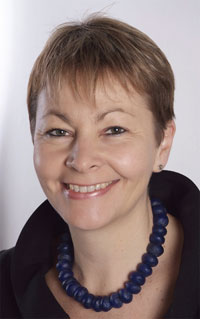 Caroline Lucas is the only Green Party Member of Parliament in the UK and she has introduced a Private Member’s Bill to Parliament. This procedure is usually used to promote a particular issue as there is normally little chance of such a Bill succeeding in becoming an Act of Parliament whereby it will become the law of the land. The introduction of LVT is Green Party policy in the UK, though normally they rarely mention it in their work, so this is a major breakthrough. The Coalition for Economic Justice (CEJ), itself a combination of LVT organisations, has commissioned a professional opinion poll to determine the public’s knowledge of LVT, what their views are on fair taxation and on current property taxes including how they are avoided by owners who leave their sites idle or underused. The results of the poll will be used by Caroline Lucas when the second reading of her Bill takes place on 9 November 2012.

The OECD, The Media and Think Tanks

The Organisation for Economic Co-operation and Development (OECD), based in Paris, has been lobbied over the years and now regularly supports LVT.

The Financial Times (FT), the UK’s daily business newspaper, and The Guardian, a left of center daily paper have often carried articles supporting LVT. The editor of Money Week regularly mentions LVT as part of the solution to our current economic woes.

Several journalists now understand the issue and there are a number of think tanks that include partial LVT in their reports. Probably the most serious of these was the recent Mirrlees Review of the UK tax system which took four years to prepare and has a whole chapter advocating LVT for commercial sites and farmland, with a housing services tax on residential properties.

Bodies Campaigning for LVT in The UK

As well as organisations, many individuals participate by speaking, leafleting and staffing information stalls at a number of activities including the recent Occupy Movement, the annual Burford commemoration of the rebels in Cromwell’s army who were executed outside Burford church, book launches, conferences and meetings and the annual Tolpuddle commemoration of the trade union martyrs who were transported to Australia as criminals for daring to form a trade union for agricultural workers.

Specific Groups campaigning for LVT in the UK include The Henry George Foundation who publish Land and Liberty, run weekly classes and other events, The School of Economic Science who run economic and philosophy classes and provide meeting venues, The Land Value Tax Campaign who publish “Practical Politics” and an interesting website, The Land Research Trust (formerly the research charity of The Labour Land Campaign but now run by Fred Harrison), Shepheard Walwyn, publishers of many books on LVT, The Professional Land Reform Group who work with academics and professionals and was the responsible body for the CEJ’s public opinion poll, The International Union for Land Value Tax and Free Trade, who have organised several conferences and published films and books in the UK, The Christian Council for Economic Justice who organise book launches and seminars, The Green Party, The Global Justice Movement, Land is Free, The Land is Ours, The Young People’s Party recently formed and standing candidates in by-elections for Parliament, The Systemic Fiscal Reform Group who argue for location value covenants, Real Reform, The Labour Land Campaign and ALTER (Lib Dems).

To date, our efforts have not achieved legislative success but we genuinely believe we are on a roll and that hopefully we will soon reach the tipping point!