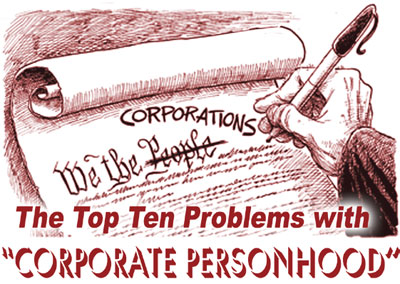 1. Corporations never die, never pay estate taxes, never divide their wealth among succeeding generations. In this they resemble medieval Churches that agglomerated over many years so much land they threatened the state itself.

2. Corporations merge with or otherwise acquire other corporations, progressing, if unchecked, from competition to cartel to oligopoly to monopoly.

3. A corporation is by nature a combination in restraint of trade – that is, a union of many individuals with their wealth to act as a unit, dealing with customers, suppliers, and workers. The courts, historically, have borne down on labor unions as illegal combinations — while treating this combination of lands and capitals as an individual.

5. The ownership of corporations is very often secret. Many stocks are recorded in “street names.” Hugo Chavez is one such owner whose name has been revealed: others might be Al Qaeda, the Nazi Party, the heirs of Mao tse-Tung, La Cosa Nostra, or anyone. No citizenship is required for a corporation to sway American government more than any private citizen.

6. No person is easily held responsible for corporate acts. The first duty of CEOs is to the shareholders, so they say, to dodge guilt for any outrage against others. Most shareholders, in turn, have little idea what their CEOs are doing.

7. The internal governance of most corporations is intensely undemocratic.

8. The corporation cannot be jailed, and its officers seldom are, as they have great opportunities to pass the buck.

9. The corporation has no spiritual counselor or confessor to prick its conscience.

10. Before January 21 the attitude, as expressed by Justices White and Rehnquist in the 1970s, has been that corporations are “creatures of the law” not equal to natural persons in their civil rights. Suddenly to reverse this now is to upset many expectations that relied on the previous rule.