On Monday, June 20, 2013, Governor Dannel P. Malloy signed HB-6706 into law. The act will permit land value taxation in three pilot communities. This is the first step, it is hoped, which will lead many more Connecticut municipalities to adopt land value taxation. Advocates believe this reform will allow the state to eventually tackle statewide structural problems with education funding and infrastructure construction and maintenance, helping to turn around a sputtering economy. Connecticut lost a crucial competitive advantage when it introduced a statewide income tax in 1991. Prior to that, Connecticut led its neighbors Massachusetts, New York and New Jersey in economic growth and general prosperity.

This legislation is a direct result of some ten years of work by the Center for the Study of Economics, supported by allied organizations such as the Connecticut Homebuilders Association, The Sierra Club of Southeastern Connecticut, and officials such as Mayor John DiStefano of New Haven. 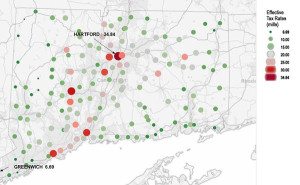 This map (click to enlarge) illustrates Connecticut’s wide variation of effective tax rates. These are the “equalized” figures, taking recent sales into account, which were prepared in anticipation of a push toward a statewide property tax. The actual rates levied exhibit even greater discrepancies.

Connecticut is struggling with a wildly disparate fiscal state of affairs. Its larger cities — Hartford, Bridgeport and New Haven — were once bywords for growth and empowerment of workers and the middle class. Over the last two decades, though, they fell further behind their next-door neighbors, descending into the vicious circle of shrinking tax bases and middle-class flight.

Businesses in Connecticut’s struggling cities, already burdened with high corporate and wage taxes, are further repelled by soaring property tax rates, in some cases effectively over 3%. As opposed to other cities in and outside of the United States, Connecticut’s municipal property taxes are significant, and have a powerful impact on economic behavior and urban fiscal health. The land value tax proposition would likely bring economic decision-making back into the conurbations.

The economic decline of Connecticut’s larger cities has resulted in decreasing real estate values and, therefore, increasing tax burdens on productive buildings. Meanwhile, wealthy homeowners in places like Greenwich are faced with property tax bills that are relatively quite affordable (particularly when viewed as deductible from their taxable income at the federal level). 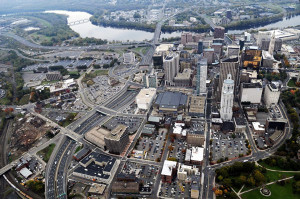 As Connecticut faces a large and growing shortfall in state funding mandated for education, a movement has emerged in support of a statewide property tax. Property taxes are not popular; this is a “last resort” sort of idea. However, state imposed sales and income taxes in Connecticut are already high, and a growing number of economists are looking to property taxes as an alternative. Of course, CSE’s view is that the very best way for a statewide property tax to succeed is if it falls predominately (preferably only) on land. Given the growing support for LVT in the state, as shown in the passage of HB-6706, we see a strong opportunity for progress in Connecticut, and, along with interested partner and Georgist organizations, will be focusing much of our efforts on making sure Land Value Taxation gets the test, and the fair evaluation, it deserves there.

Meanwhile, in Pennsylvania  The beginning of 2011 saw the introduction of a city property tax that fell on land values only, unique in the history of US cities. Altoona joined Sydney, Copenhagen and hundreds of other cities that have found land value taxation a simple, effective and reliable source of revenue without causing the distortionary effects of other taxes such as sales, wage or building taxes. 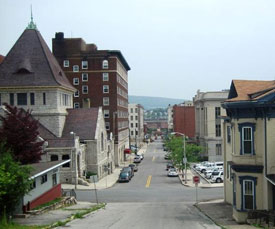 In 2012 the Altoona Mirror reported the rationale for the land value tax, as well as challenges that lie ahead for the city. It looks as if land value tax may be here to stay, if adjustments are made each year for changing revenue needs and real estate values. Altoona may now be ready to start replacing such taxes as the local income tax or business taxes with LVT, to better position itself for a devoutly desired economic recovery. — urbantools.org