A Tribute to Arti and Don

Arti Yeatman and Don Hurford were two of those exceptional people who had the courage of their convictions. A very large part of my success as a Henry George teacher is due to them.

Arthur P. Yeatman, who died on Nov. 11, 2012, was my friend, colleague, and benefactor. He was among my students during the first few years that I taught Henry George classes in the early 70s, and he was among my first converts. Arti was deeply involved with Mildred Loomis and the School of Living, which holds land in trust, and manages intentional communities with permaculture.

Arti recruited students for many Henry George classes, held at his house and the School of Living. Several times he arranged for day-long Georgist programs at the School of Living’s Annual meeting. He got land value taxation on the program at several Intentional Community conferences, and he made enormous financial contributions in support of Georgist classes.

Arti taught Henry George classes himself at the School of Living and his Quaker meeting house. One of his students led the Georgist Gild in Arden for more than 20 years. Arti was a frequent participant and an occasional speaker at the CGO conferences, and, like so many Georgists, he never passed up a chance to explain the single tax to anyone who would listen. While receiving hospice, Arti was asked if there were any words of wisdom he would like to share before he left us, and he said, “The solution to economic justice and war is all in Progress and Poverty.”

Donald E. Hurford, Ed.D., who died this year at age 96, was my friend, colleague, and promoter. Don was involved with the School of Living and the Unitarian fellowship; he was passionately involved in the peace movement. Don studied Georgist political economy in New York during the 1940s. His interest in it was rekindled when Arti Yeatman brought him to the Arden class in the early 1970s.

Don arranged for Henry George speeches at several Unitarian Fellowships. He offered a Georgist seminar each term in his sociology classes at the college where he taught. He was successful in having the Henry George course taught at the local chapter of the National Organization of Women.

He belonged to Toastmasters, where he gave many speeches introducing listeners to a Georgist perspective. He taught Henry George classes in Arden, and substituted for me many times in Philadelphia and Arden, and in the prison program. He took an early retirement from Lincoln University and worked as Education Director of the Henry George School in New York during the 1980s.

Jake Himmelstein, one of our feistiest and most practically-minded Georgists, passed away this past March at the age of 73. Jake was a staunch supporter of the Georgist movement in its every sensible and practical effort — and a fiery denouncer of distractions posed by indecision or hypocrisy.

Jake was a CPA, with an MBA from the University of Pennsylvania’s Wharton School. He began teaching for the Henry George in Philadelphia in the 1970s. Along the way he poured energy into our movement in many ways: he served as a Trustee of the Henry George School (prior to its infamous ousting of George Collins, which he bitterly denounced), served on the boards of the International Georgist Union and Common Ground-USA, founded a local organization, the Pennsylvania Fair Tax Coalition, and taught many correspondence students for the Henry George Institute.

Jake Himmelstein always felt that the work of the Georgist movement — in all its aspects, whether purely educational or practically political — is too important to suffer any pussyfooting. His advocacy was more passionate than tactful: he believed that the world needs the Georgist remedy and it needs it now. He warmly and generously supported those who agreed with that belief — and was known to fiercely excoriate anyone he thought was getting in the way.

Jake was a fixture at annual CGO conferences. The last two he attended, though, were physically very difficult for him. He got there, and participated, on the strength of sheer, bullish, stubborn commitment. There is much to admire in that. Jake will be missed.

We note the passing of Albert S. Hartheimer, a Georgist activist, educator and supporter at age 87, in Lanesborough, MA, where he lived. Born in Jersey City, NJ in 1925, he attended Rensselaer Polytechnic Institute in Troy, New York until 1944, when he answered his nation’s call and entered the US Navy until 1946. He returned to RPI and in 1949 graduated from the School of Architecture. He established and directed an architectural practice in Albany, NY from 1953 to 1976. In 1976 he established a domestic and international tour company.

More important to him, however, was the economics course he took in 1966, taught by the director of the Syracuse Henry George School, Manny Choper. The Progress and Poverty course had a profound impact on Al. The following year, he ran as a progressive candidate for mayor of Albany, opposing an entrenched Democratic machine, placing land value taxation at the top of his platform.

For the rest of his life, Al worked tirelessly on behalf of tax policies which would promote social justice and help to eliminate poverty. He collaborated with Bill Batt and Don Reeb to enact land value taxation as a pilot program in Amsterdam New York in 1994. He volunteered his time and resources to perform studies and testify in favor of LVT as a path to social and economic justice from such varied communities as Berlin, New Hampshire to Asheville, North Carolina.

He was a member of the Georgist contingent that went to Russia in the post-Soviet era to urge adoption of land rent collection. In the mid-2000’s, Hartheimer was an adjunct instructor at Williams College, teaching Progress and Poverty, using an interdisciplinary approach combining economics, planning, environmentalism, and philosophy.

He served as a board member on several foundations, including the Center for the Study of Economics and the Robert Schalkenbach Foundation. At the very end of his life Al was still giving Georgist instruction to the medical staff in his room at Berkshire General Hospital.

To quote him: “The highlight of my life is waking up each morning and enjoying every day. Every day is special. I have so many things that are special; I can’t count them all.” 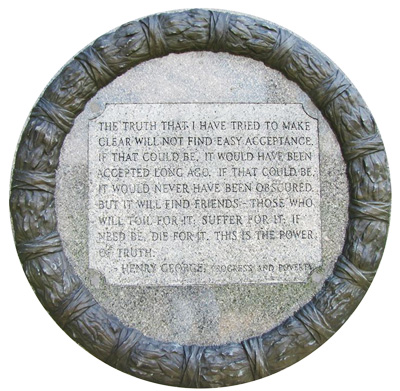