Adele Ernst Wick died at her home in Greenland, N.H. on Sunday, September 27, 2015. Born in Gates Mills, Ohio, Adele received her B.A. in Economics from Wellesley College in 1972, and earned an M.A. in economics at the University of Chicago in 1976. 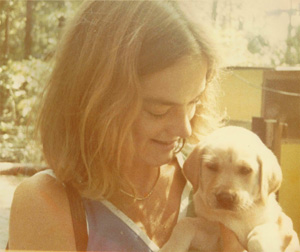 Adele taught Economics at the University of Tulane in the early 1980’s. The family moved from New Orleans to Greenland, New Hampshire, in 1986. She took on many volunteer and freelance assignments while she was raising her children, including work on oral histories with the family of Cyrus Eaton. Her local work in Greenland included youth soccer, Greenland Public Library and the Weeks Brick House. She also took tremendous pride in pioneering Greenland’s recycling program.
Adele combined her love for friends, family, her large dogs and nature by taking frequent “walk-talks” as she would call them. She was a good listener and avoided making judgments, which made her a good board chair. She was involved in national organizations pursuing tax reform in the interest of greater and more equitable economic development. She was a peacemaker and with that credential was elected chair of the board of the Robert Schalkenbach Foundation in New York. I served on this Board and can testify to her calming influence.

Adele took an interest in other people’s projects. When my mother (Hilda van Stockum) died in 2006 she wrote the nicest thing in my mother’s condolence book:

I’m about to finish The Winged Watchman. I don’t want to finish it. The story, the style, and the illustrations I savor. I particularly love the beginning, making its young readers feel the war through hunger, and the father’s line about preferring to think about what people do out of church to in. I usually don’t look at illustrations, but hers draw me in with their delicacy, feeling and power. Thank you for introducing me to Hilda van Stockum.

She is survived by her sister Mary Bole; her four children, Douglas Miller, Patrick Miller, Charlie Miller, and Elizabeth Miller; and her grandchild Henry Miller.

With her death, the world is a less peaceful and beautiful place. Alice and I extend our sympathy to her family.