I get that these are tough times for print magazines, and punchy headlines can drive sales. The 2/16 issue of Scientific American drew me right in with “Can Africa’s Population Rise to Six Billion?” The article is digested from the new book, More: Population, Nature and What Women Want by Robert Engleman, a former president of Worldwatch Institute. Its “In Brief” initial summary begins, “By 2100, Africa’s population could be 3 billion to 6.1 billion, if birth rates remain stubbornly high.” The first sidebar, titled “Africa Drives Global Population Growth,” shows ranges of high and low fertility projections for Africa and Asia, but features an “Oh wow” supercurve showing Africa’s population reaching 15.8 billion! This is what would happen, the caption explains, if present fertility rates continue. As we catch our breath, it goes on to reassure us that “demographers do not expect that to happen, but the projection shows how powerfully fertility drives growth.” Yikes!

Yes, fertility drives growth. But that truism yields little understanding: the more important question in terms of sustainability (not to mention prosperity and economic justice) is, “What drives fertility?” Those who fret over bad social and economic conditions in Africa conveniently forget that those conditions have actually been improving. By many measures, such as life expectancies and levels of literacy and income, life across Sub-Saharan Africa has progressed from abjectly horrifying to merely very bad. In the 1990s, the total population of the African continent actually declined. Recent improvements in child survival are what has made it possible for population growth to take off (see sidebar).

Engelman notes that past population-control efforts have relied too narrowly on access to contraception and campaigns extolling the virtues of smaller families. He believes that significant declines in fertility can only be achieved through across-the-board empowerment for women, “educationally, economically, socially and politically.” This is a tall order — it amounts to full-scale societal transformation — but Engelman suggests a shortcut. Many studies have shown that improved education for women tends to result in lowered fertility, even in the absence of significant economic advancement. Better-educated women, especially during the all-important secondary-school years, are empowered women who are able to make more sensible reproductive decisions. That sounds well — but, how many African women are attending, much less completing, high school? In most of Africa’s 54 nations, secondary education is not free, is certainly not compulsory, and is often rationed in ways that favor men. According to the World Bank, only 27% of Malawi’s girls enroll in secondary school, just 13% attend, and only a fraction of them will actually finish. On UNESCO’s list of the ten nations with the poorest records on women’s education, Yemen and Pakistan are #’s 7 and 8; the rest are in Africa. The Forum for Africa Women Educationists reports that as of 2008, only 25% of the high-school age girls in Sub-Saharan Africa were enrolled in school. That is the unfortunate social reality. If educating women is the key to controlling runaway fertility in Africa, then we’d better plan on welcoming a lot more Africans into the world.

It’s not hard to see the logical flaw displayed by writers who focus on population growth as the key sustainability issue. “Any transition to prosperity,” Engelman writes, “requires a significant fertility decline.” Their logic runs thus: since fertility is the main problem, and women’s education correlates with lower fertility, all we have to do is make sure enough women read the memo about their reproductive rights and options, and all good things will follow. It’s a bit subtler and more ambitious than shoveling condoms out of trucks, but it really amounts to the same kind of symptomatic approach to a systemic problem.

Africa’s persistent underdevelopment is often contrasted to that of the Asian “Tigers” (South Korea, Singapore, Hong Kong and Taiwan) in which declining population growth coincided with rapid industrial development. (See, for example, the European Union-sponsored study, “Africa’s Demographic Challenges”)While it is true that demographics played a role in the East Asian nations’ rapid development, it’s also true that their situations could scarcely be more different than those of Sub-Saharan Africa. For example, South Korea has few natural resources. In 1955, its population density was about 251 people per square kilometer. Nigeria is blessed with abundant natural resources of many kinds — and its capital, Lagos, will probably soon become Africa’s largest city, with over 22 million people. Seems like a lot — yet Nigeria’s population density today is 58 people per square kilometer. Nigeria’s population could quadruple, and still be less dense than South Korea’s was before its rapid industrialization began.

Yes, Africa’s population has been growing rapidly. Yet with its current population density of 25 people per square kilometer, Africa is only a tiny bit more densely populated than North America (which includes all the open expanses of Canada, Alaska and the Western US), at 23.

There is, of course, plenty of land in Africa. Even after decades of deforestation, it boasts wide expanses of virgin wildlife habitat; there are wild elephants in Botswana, lions and giraffes in Uganda and Tanzania, and beleaguered mountain gorillas still hanging on in Rwanda and Congo. There is enough land to support nomadic herding peoples in the East and hunter-gatherer Bushmen in the Southwest.

There is also abundant land available to be sold off, in alarmingly large amounts, to foreign buyers. Since 2000, some 26 million hectares of land in Africa, an area about the size of Oregon, has either been sold to, or is in negotiation with, foreign buyers. The land is mainly used either for (export) agriculture, or for forestry. This is a burgeoning practice, because it is very profitable for investors and offers quick cash to cynical politicians. Most of the lands being sold or leased at bargain prices are in the possession of national governments. As such, they are often farmed or grazed by local people at no cost; those people are displaced when the lands are given over to private tenure, which increases the pressure on sprawling cities. Make no mistake, this is a despicable practice that harms poor African people. Yet there is still time to halt it before irreparable harm is done. While an area the size of Oregon over fifteen years seems like a lot, in Africa that isn’t as huge as it seems. Oregon is roughly the same size as Ghana; find Ghana on the map of Africa.

Deal-makers in cash-strapped governments say they need the money, but there would be better ways to get it: land sell-offs are a counterproductive giveaway of national sovereignty. What most of Africa’s nations really need are the classic elements of prosperity: access to education, health care, safe drinking water, reliable infrastructure and, indeed, to their continent’s nearly unimaginable profusion of natural resources.
To see how these facts play out in the real world, it is useful to compare two African nations that have some things in common, yet seem to be on very difficult political/economic trajectories: Nigeria and Botswana.

Nigeria, as just about everyone knows, is the world’s poster child for the “resource curse.” 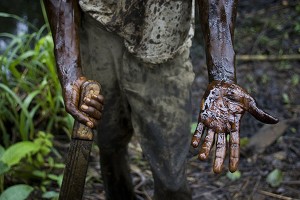 It is awash in oil and natural gas, and has, arguably, the largest economy in Africa (a 2014 recount showed Nigeria’s GDP to have passed that of South Africa). Yet its people have little else going for them. Nigeria exports 2.4 million barrels of crude oil per day, and imports 180,900 bbl/day of refined petroleum products. Its poverty and quality-of-life numbers are decidedly “third world,” and it has allowed international oil firms to devastate the ecology of the Niger Delta — formerly one of the earth’s most bountiful and varied habitats. Though it has, in recent years, achieved stable transitions of power after presidential elections (it hasn’t always), Nigeria’s political system remains one of the most corrupt in the world. (See “Resource Rights and the Challenge of Governance…” by Gordon Abiama)

Things are more hopeful in Botswana, though it wouldn’t seem so at first glance. Botswana’s economy depends to a large extent on diamond exports, a market which contracted rather severely during the Great Recession.

Notably, women in Botswana live about four years longer than men. This is the case in only a few countries, and it is a sign that something is seriously awry. It used to be so in Pakistan, but is no longer. Of the seven nations in the world today in which men live longer then women, six are AIDS-ravaged countries in Southern Africa. The only outlier is the tiny Caribbean island of Montserrat. There, some 8,000 people fled volcanic eruptions in 1995; the current population is only 5,241.

Botswana is also severely affected by the AIDS epidemic, with 25% of its adult population living with HIV.  However, Botswana’s response to this crisis has exemplified effective, responsive governance; it began in 2002 to implement a program to provide nationwide access to anti-HIV drugs, and now 95% of its people who need such treatments are receiving them.

A snapshot of Botswana’s economy depicts a nation that is playing a series of poor hands very well. The country is slightly smaller than Texas, landlocked and mostly flat. Most of the population is concentrated in the Eastern part of the country; the Kalahari Desert makes up about half of Botswana. About 45% of its land is used agriculturally, but this is almost all for pasture; the CIA World Factbook lists it as having no irrigated cropland. 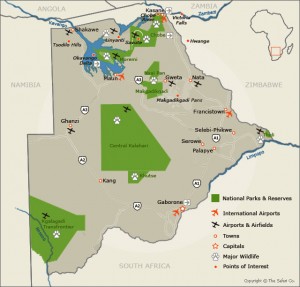 It imports about 95% of its electricity. It had a trade surplus in 2014, but not in 2015. Despite the fact that its current unemployment rate is 17%, Botswana is currently seeing an increasing flow of immigrants fleeing the economic malaise and unrest in neighboring Zimbabwe. Yet, despite the flatness of the diamond market and the ongoing cost of its AIDS treatment programs, Botswana roughly equals Nigeria in life expectancy, and its rates of poverty and illiteracy are far lower.

Undoubtedly, writers like Engelman (and Joseph Bish, of the Population Media Center, who developed a similar thesis in The Guardian) have good intentions; they seek to illuminate hard truths concerning development and sustainability. It is painfully clear, however, that to identify fertility as the cause of social and economic problems leads to fuzzy analysis and bad public policy. In the absence of other reforms, it’s hard to see how a crash program of family planning — or even a program of family planning as the result of getting girls through high school — would bring much positive change to a place like today’s Nigeria. If, however, while all those young women were learning about contraceptive methods, they also got some basic political economy, something very good might get started.

I go to the heart of the matter in saying that there is no warrant, either in experience or analogy, for the assumption that there is any tendency in population to increase faster than subsistence. The facts cited to show this simply show that where… human life is occupied with the physical necessities of existence, the tendency to reproduce is at a rate which would, were it to go on unchecked, some time exceed subsistence. But it is not a legitimate inference from this that the tendency to reproduce would show itself in the same force where population was sufficiently dense and wealth distributed with sufficient evenness to lift a whole community above the necessity of devoting their energies to a struggle for mere existence.  — Henry George