In the 2016 US primary elections, many voters, unhappy with the social conditions, favored candidates who, with bombast, promise to bring back or push forward to greatness, equality, and prosperity. That so many are dissatisfied speaks badly for the current officials and policies, which had offered hope and change. While much attention is being focused on the candidates, the voting, and the political horse race, almost nobody is stepping back and taking a wide view of the whole corrupted and unfixable system of mass democracy.

“Mass democracy” is a system of voting in which the number of voters is so large that very few voters know the candidates personally. In the USA, millions of persons vote for President, Senator, House Representatives, and state governors and legislators. The only way the candidates can send messages to the voters is with the mass media, which requires massive costs. 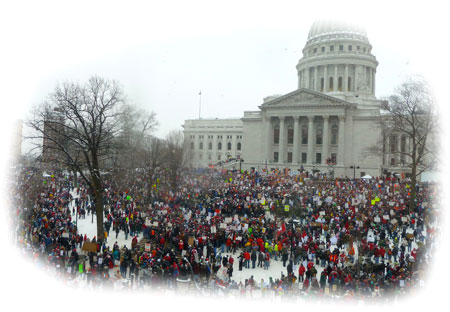 Much of the funding comes from special interests — corporations, labor unions, lawyers, and real estate interests. Even when funding comes from individual supporters, the mass advertising is often negative and misleading. Even when the message is about policy, a short ad boils complex issues down to slogans and rants. An ad needs to command attention with emotions and alarming facts — and many voters love this, as they carry signs and flock to campaign rallies in adoration of their political savior.

Some historians view the rise of American mass democracy with the election of Andrew Jackson in 1828, after the presidencies of the Virginian elites. Others, such as Hoebeke in The Road to Mass Democracy, point to the adoption of the 17th Amendment, which replaced the election of Senators by the state legislatures with a direct election by the mass of voters. The election of the president too was originally intended to be indirect, the people electing a group, the “Electoral College” of experts, who would then elect the president, but that system devolved to a system in which state representatives to the college are bound by their party affiliation.

Today’s mass democracy can be traced back to the British Parliament, which set the pattern for parliaments worldwide as well as the US Congress. The two houses of Congress copied the British Parliament’s two branches, the House of Lords and the House of Commons. As the right to vote was extended to all adults, and as the population grew, the electorate became every more massive.

Several sociologists and political theorists of the 1800s examined the rise of mass democracy. Mosei Ostrogorski, a Russian political scientist, analyzed mass democracy in the USA and the UK in Democracy and the Organization of Political Parties in 1902. Ostrogorski wrote that the mass of voters judged the parties by their class interests, which drove them into the interests of political machines. German sociologist Max Weber stated, in his essay “Bureaucracy,” that “Bureaucracy inevitably accompanies modern mass democracy in contrast to the democratic self-government of small homogenous units.”* Also, “the demos itself, in the sense of an inarticulate mass, never ‘governs’ larger associations.”

Weber put his finger on the remedy, although implicitly. The contrast to mass democracy is the self-government of small, though not necessarily homogenous, units. The 19th-century anarchists came up with a system of small-group bottom-up governance. Neighborhoods each elect a council, and those councils elect higher-level or city councils, which then elect county, state, and national legislatures, parliaments, or congresses.

Think of the contrast between neighborhood governing cells and today’s mass voting. Gone would be staged “debates” among power-seeking candidates disparaging one another. To be elected, a Trump would have to start with his local neighborhood level-1 council. He could spend money, but another candidate could cheaply distribute literature and hold meetings. If the Trump got elected to the neighborhood council, he would then have to convince that council to next elect him to the level-2 council of the district made up of some 20 neighborhoods. The members of level-2 would then decide which of their members would get on the city council. At each step, the Trump candidate would present his policy ideas and be subjected to questions. Finally, the congress or parliament would elect the president. Gone would be the ads and hoopla and bombastic statements that rouse the masses.

If the voters are unhappy with politics, the economy, and tangled foreign adventures, they should start thinking about whether our political system is not suited to the 21st century. Nobody is talking about systemic change. Someday people will question the system, but unfortunately only after a mass failure.

(This article originally appeared at progress.org )