The familiar “Law of Rent Chart” first appeared in print in the 1915 book by Louis F. Post, The Taxation of Land Values. The chart shows the simple fact that different locations offer different productive potentials — and that the wealth the average producer can create, and keep, on the free land represents the alternative return for producers everywhere. 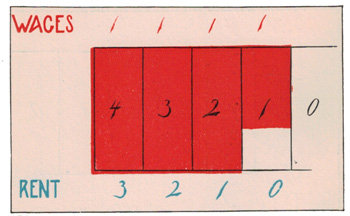 There’s one thing the classic charts didn’t show: not only are workers more productive on the best locations, but more can work there, per unit of area — because of infrastructure and other synergistic factors. Post’s chart illustrated the extensive margin — but the intensive margin is also an important phenomenon.

Here we show a model with five different grades of land. The best workers tend to win the competition for the best locations, where more capital is used — and more workers can be employed on each “plot.” The cost of public services (infrastructure) increases in proportion to the number of workers. In this model there are four plots of each grade of land. One of each four has been held out of use. 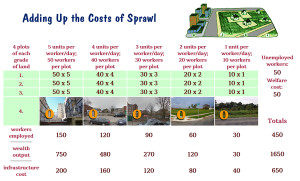 Let’s further suppose that our society uses some of its tax revenues to ease the burden of unemployment. Out of 500 willing, able workers, 50 of them can’t find jobs. We’ll say that the one unit of wealth per day will provide for bare subsistence, and is the payment to “welfare recipients.” Thus, 50 units of tax revenue per day will be redistributed to the unemployed. Given all these assumptions, note the aggregate totals on the lower right.

On the second chart, we see what happens if we employ the same number of workers, but without land speculation. The 50 formerly unemployed workers are now productive. How? Natural opportunities are now available for their use, and increased production has increased the demand for their labor. 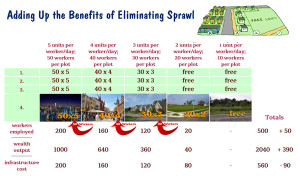 Wealth output has increased, because workers are more productive, now that more of them have access to the better land, from which they were previously locked out. Infrastructure cost is less, because development no longer leapfrogs past unused land.

Because of more efficient use of land across the board, some land is now unused, despite the fact that it had been provided with roads, schools, police protection, etc. It would make sense to use society’s rent fund to pay the relatively low cost of maintaining that infrastructure. If that were done, there would be usable free land, available to anyone who wished to use it — all in all, quite a practical anti-poverty program!