Excerpted from a chapter in Rent As Public Revenue: Issues and Methods

A great many people have come to believe that society really must get serious about climate change. Although skeptics complain about the conjectural nature of “the science” on this issue, it is generally recognized that we cannot be 100% certain about long-term global processes. No one knows for sure how severe the consequences of unchecked greenhouse-gas warming will be, or when things will start to get really bad. However, the probable effects of climate change are sobering.

Normally, a credible risk of a dire outcome is enough to motivate action. The chance of a home burning to the ground is pretty low, yet homeowners routinely invest in fire insurance, smoke detectors and fire extinguishers. Communities build levees, not to protect against high tide, but against hundred-year flooding events.

Yet people don’t always respond rationally to risks. The likelihood of a terrorist attack in the United States is very small, way less than other calamitous events. It’s much more likely, for example, that a busy highway bridge will collapse. The Federal Highway Administration estimated in 2013 that about 25% of the 607,000 bridges in the United States are functionally obsolete. Nevertheless, the 9/11 attacks so traumatized Americans that they are willing to devote far greater resources to guarding against terrorists than to repairing bridges. The risks of climate change include flooding, sea level rise, extreme weather, mass migrations and resource wars — yet society has been unwilling to commit more than token resources to curbing greenhouse-gas emissions. Any feasible plan for dealing with this problem would have to include a strategy for dealing with this pervasive cognitive dissonance.

Most people acknowledge that global climate change poses a level of risk, the rational response to which would be to immediately implement a top-priority campaign to shift away from fossil fuels. Yet internationally the best we have done, so far, is the Paris Accord of 2014. This agreement, ratified by 145 nations, represents a groundbreaking acknowledgment of the problem. Unfortunately, though, the United States has backed out of the accord. The Obama Administration made it an Executive action, knowing it wouldn’t get past an opposition Congress; this made it possible for the Trump administration to back out of it. They did so, in spite of the fact that the Paris Accord imposed no legally binding requirements. Signatories to the Paris agreement pledged to set national goals for greenhouse gas reduction, and issue periodic reports about their progress. They are free to relax those goals as they go, and there is no mechanism to enforce compliance. 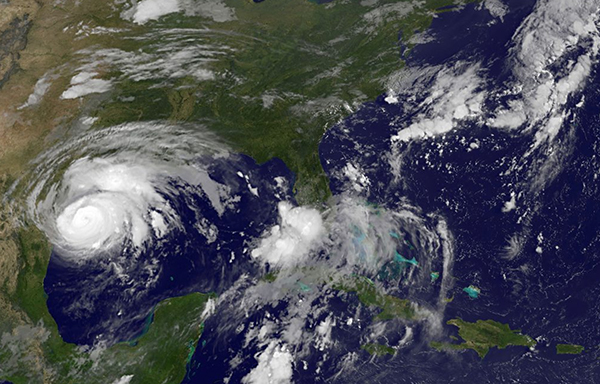 There is a cohort of people — some of them well-funded and well-read — who vehemently deny the reality of anthropogenic climate change. For the moment, we’ll assume that they are incorrect. Some observations can be made, however, in terms of broad tendencies, about the attitudes of climate-change deniers. They tend to be politically conservative, to favor strong national defense, to be suspicious of immigrants and nervous about terrorism. It is, perhaps, ironic that many climate-change skeptics wholeheartedly believe in the threat of terrorist attack and are ready to devote copious resources to guard against it. 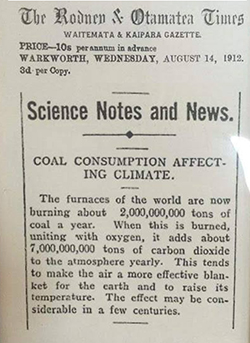 Here is a hypothesis for further research: that cognitive dissonance, rather than any technical difficulties, is the main impediment to progress on this issue. Civilization seems to have entered a watershed moment in the way it understands territory, sovereignty and the fate of the planet. Climate change is undeniably a global issue; if it is not, then it is not an issue at all. There is no alternative. The problem of climate change cannot be solved by any nation’s unilateral action. Any effective policy to remedy this problem must be enforceable at an international level. Yet sovereign nation-states are the highest jurisdictional level that we are accustomed to dealing with. Indeed, many people will accept no higher jurisdictional level (indeed, they believe the federal government has too much power already). This is an element of ideology. Therefore, for these people, the threat of damage caused by anthropogenic climate change is literally unthinkable.

This helps to explain why the climate change debate inspires such vehemence on both sides. On the other side of this issue — the “green” side — people shake their fists yelling “The science is irrefutable!”  Yet they have not read any of the science. They have been inspired by the iconic Apollo photograph of the whole Earth. They are appalled by what they see as useless, immoral military conflicts, a waste of good resources on huge stocks of weapons, piled up by nations against other nations.  They think “one world” is a fine idea — and they see the global nature of the climate-change problem as fitting organically into that: a direct message from Gaia.

Each side sees the other side’s world view as fundamentally flawed.

The power of the big picture

The Georgist vision offers insight into how to bridge this divide. It asserts the community’s right to the value of natural opportunities. In this, it serves to clarify the incessant debate over what should be private and public property. This suggests a path toward resolving the seemingly seemingly intractable dilemma of global resources.

There are a number of contentious issues that seem absurd and intractable, until the “land” (or “natural opportunities”) piece of the puzzle is fitted into place. For example: progressive-minded people bitterly oppose the forces of globalization and international trade, seeing how they bring about a “race to the bottom” in which nations seek to attract jobs and investment by removing protections for workers or the environment. Trade agreements that facilitate this are seen as “eroding national sovereignty.” Yet, it can be argued that when society cedes the rent of land to private owners, it yields up the most important element of sovereignty. Community-created land values are given over to private interests (often to foreign ones).

The issue of taxation is another of these Gordian knots. To support public services, communities resort to burdensome taxes on productive activity. These taxes make businesses less competitive, exacerbating the “race to the bottom.” Indeed, if we don’t consider the Georgist remedy, the entire issue of taxation — of public revenue in any form — is absurd, because the rent of natural opportunities is demonstrably the first and best (and we say “the only proper”) source of public revenue.

Even among people who concur with the climate-change thesis and recognize the dangers, there is a curious lack of urgency about this issue. It would seem that the future serviceability of the planet’s air and water is the ultimate “land lssue.” Yet even Georgist activists are tempted to see the climate change issue as marginal. There are only so many hours in a day; it’s hard enough to get across the perfectly self-evident idea that a city is better off taxing land rent than levying fines on workers for working or builders for building.

Yet, just as there is only one global atmosphere, perhaps there is only one global Georgist movement, which encompasses (to a greater or lesser degree) everyone who strives toward justice and sustainability. There are good reasons to believe that we can have neither of those things, in the long run, unless we recognize that the natural resources of our planet must be shared by all.

This isn’t as radical a notion as it may sound at first. it just requires us to expand our field of view. As John Locke famously noted, there is nothing wrong with a person asserting private ownership of a piece of land, as long as there is as much, and as good, land still available for the next person. When that is no longer the case, land rent comes into being — and Georgists believe that land rent rightfully belongs to the community. Once land rent begins to become economically important, some form of government arises to administer it. The atmospheric commons is economic land; the basic principle is the same. Until recently, people could dump as much CO2 into it as they wanted; there was as much good air for the next person. But now a rent has arisen for the atmosphere’s carbon-sink services. If history is any guide, some form of government will eventually arise to administer it.

If we take the threat of climate change seriously, then we need to facilitate that development.  Establishing a new administrative level need not threaten the sovereignty of existing institutions. People have long accepted the simultaneous jurisdiction of multiple sovereign levels. We accept local, regional and national authority in various matters; we vote and pay taxes at each level. Yet the initial establishment of higher levels of government is often controversial. For example, it took some 90 years for the United States to resolve the issue of slavery at the national level — and issues of states’ rights remain contentious to this day. The European Union continues to struggle with a wide range of issues, including immigration, defense and taxation. It should surprise no one that establishing international jurisdiction over global resources would be a challenge, but sometimes hard things need to be done.

Georgists have often focused tactically on one particular aspect of resource rents: local property taxes, land trusts, royalties on extractive resources, etc. It is sensible to focus on a single political avenue. Nevertheless, when we focus on a specific campaign, we risk missing the big picture. In economic analysis, land is utterly pervasive; no form of production can take place without access to it. However, it may be that all of those Georgist-advocacy efforts are weakened, if there is no concurrent effort to teach the broad outlines of the Georgist philosophy. We might be able to fortify our various implementation efforts by connecting the dots. After all, why should people accept a global jurisdiction over the atmospheric commons, when they have no such jurisdiction over the vacant lots in their center cities, or the vast acreages held by foreign corporations?

It could be that the land issue, broadly defined, is the missing link connecting local tax-reform efforts and international climate-change advocacy. It’s our land; it’s our air and water, and we need to see this not simply in sentimental or moral terms but also as effective economic policy. And if that is so, it implies that at this fateful moment in history, the most practically effective thing that can be done is — as Henry George said in 1886 — the work of education. We must explain how land truly is at the base of everything — economically, politically and environmentally. When people understand that, they’ll know what to do.