On May 19th, a forum explored the issues raised by Mason Gaffney in a special issue of the American Journal of Economics and Sociology (Nov. 2016). Held at Manhattan’s Open Center, the event was sponsored by the Journal, the Robert Schalkenbach Foundation and the International Union. Three featured speakers and three respondents shared a wealth of provocative information on the challenges and opportunities in water policy today. 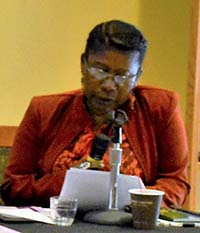 Quisia Gonzalez, a UN-NGO Delegate for the International Union, served as moderator. She spoke of her work on behalf of the Honduran Garifuna community in their struggle for land and water rights. She also thanked Ed Dodson for his work in coordinating this event.

The first speaker was David Triggs, president of the IU, who has worked for more than forty years on water-management projects in many countries. Throughout his career he has responded to the spiritual aspects of water as well as to its economic management — beginning with his work in India, where the Ganges is “the mother of all.” 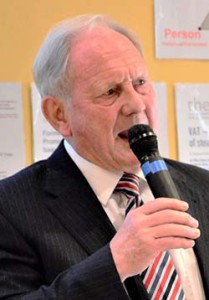 Triggs asserts that “in addition to the natural commons, there are social commons.” Water is necessary to life, therefore everyone has a right to it — yet in most communities, that right can only be secured through public infrastructure. Across the developing world, existing water systems fail to secure this basic human right. The piped supply is insufficient; water is off for much of the day, and when supply pipes are dry, sewage often runs back into them. The biggest cause of death in poor countries is dehydration caused by water-borne diarrhea.

Recognizing everyone’s right to water does not, in Triggs’s view, make privatization completely unworkable. His solution is to guarantee every person’s minimum per-capita need, and then sell the surplus water. This would provide a healthy revenue stream, incentivizing efficient delivery, without causing the preventable suffering that we now see in many countries around the world. 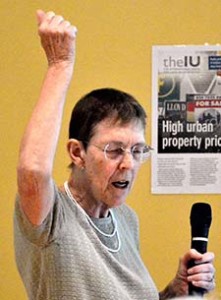 Polly Cleveland engagingly summarized Mason Gaffney’s writing in The American Journal that inspired this event. Gaffney reviewed water policy in California, and then discussed how California’s mistakes are replicated in many places around the world. Cleveland noted that English common law was the basis for water law in California (and many other places), despite its inapplicability in desert conditions. Water rights were traditionally based on “first come, first served; use it or lose it,” which led to a severe overdraft of groundwater. In the 19th century, a Georgist policy of funding water infrastructure with the rental value of riparian rights led to a great increase in farm productivity. Afterward, however, various subsidized water-delivery projects led to huge excesses of water in uneconomical places, which in turn led to mechanization and displacement of workers. Water rights in California, Gaffney writes,

were granted with good social intentions in the early days to help median settlers put water to use. Today, those same rights are anachronisms that have caused water to be used wastefully and have caused artificial water shortages. Because of rules discouraging careful stewardship of water, including conservation and reuse, state and federal taxpayers have spent billions of dollars to build up large water impoundments and to move water around the state.

Gaffney notes that when so many inefficiencies, both spatial and temporal, are built into the water-delivery infrastructure, there is no way that a mere “Coasian” allocation of property rights can remove them. The Coasian view, on the other hand, locks in existing injustices and rewards speculators. One big reason for this is that — despite the predictions of conventional theory — the amount a current resource owner is willing to accept (WTA) to give up the resource is often considerably more that the amount a buyer is willing to pay (WTP) for it. “WTA is consistently higher that WTP in empirical studies of environmental amenities because most people do not find monetary compensation an adequate substitute for the loss of nature.”

Gaffney arrives at four general principles that can repair the human relationship with nature, both environmentally and economically.

Reciprocity is needed for equity and efficiency — Natural resources must be understood to be the property of the whole community, and any exclusive right to their use carries a corresponding duty to pay the community their value.

Government is the agent of society — The pervasive fact that WTA to give resources up is much greater than WTP for them shows that self-interested actors cannot be relied on to adequately apportion water (and many other natural resources). Government must use its legal authority to secure the rights of the whole community.

Ecological limits are economic limits — in many places and in many markets, ecologically unsustainable practices eventually show themselves to be economically inefficient as well.

The third main speaker was David Michel, a Fellow at the Stimson Center in Washington DC who has done extensive research in transboundary water-management issues. He offered a gloomy estimate of our capacity to solve these deepening problems, especially as advancing climate change exacerbates them. His prepared remarks offered no response to the more hopeful possibilities explained by Triggs and Cleveland. 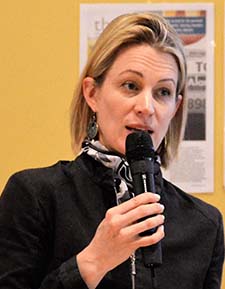 Then the three respondents contributed useful remarks. Chrisitana Zenner Peppard, a widely published theologian and environmental ethicist, told us that “paradigms shape perception” and that the transnational water issue is a lens through which to view questions of universal morality. “Spiritual and cultural realities,” she said, “must be instrumental in devising solutions to transnational issues.” And, the emergence of global social media offers a new opportunity to share views on these cultural and spiritual aspects: “Cutting through biases can make progress possible.”

Alex Beauchamp, of Food & Water Watch, cautioned that academics need to be connected to real work on the ground; many people are suffering and in danger right now. He sees hopeful signs, however, of people paying attention on many levels: “We can make progress, even in Trump world.” Then David Ward, of Trinity Church’s Environmental Justice Committee, echoed the need for activism, but was less hopeful that the needed breakthroughs would emerge. He advised us to check out the wealth of quality information on water issues at circleofblue.org.

The forum was thought-provoking, well-planned and well attended. About 50 people we on hand at the Open Center, and more tuned in on the Web, where it was live-streamed.